This weekend Ruby Barkmeyer will cheer on her team from the couch. 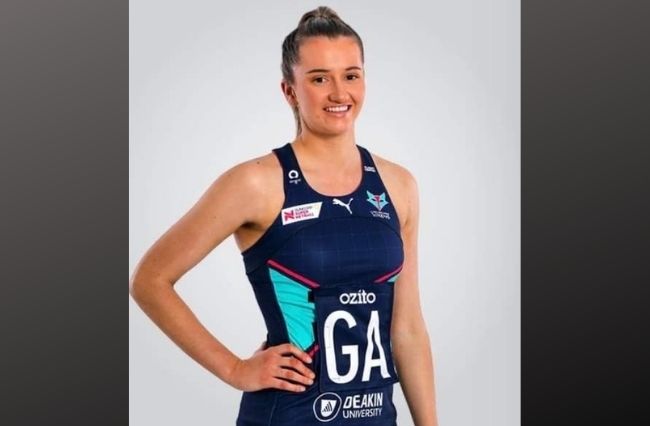 This Sunday, the Melbourne Vixens will compete in their first Suncorp Super Netball (SSN) Grand Final against the West Coast Fever. Despite the blockbuster final being held in Brisbane due to the coronavirus pandemic, the Vixens will be playing for their supporters in Victoria.

Unable to support her teammates from the stands, Barkmeyer will instead watch this year’s Grand Final from her lounge room with her family—the same way the 19-year-old goaler has watched every Vixens match this season.

It’s been a bizarre year of netball for all involved, but more so for Barkmeyer who has faced uncertainty at every turn.

In November last year, she received an exciting phone call from the Vixens offering her a position as a training partner, a group of players who are brought into the club environment to form an extended squad and assist with day-to-day training. They can also be named as replacement players if needed.

The hard work started immediately, the training partners hitting the court away from the main group with coach Simone McKinnis before full pre-season training commenced in January.

The fourth annual SSN season was scheduled to start in May, but was deferred until July due to government announcements surrounding the outbreak of COVID-19. It was later decided that the entire competition would follow the AFL and relocate to Queensland, causing teams to scramble to the sunshine state just 12 days out from the season’s new start date of 1 August.

This was an uncertain time for the Barkmeyer, who didn’t know what the move would mean for her opportunity with the Vixens.

“We weren’t sure of the squad size, of how many they could take,” Barkmeyer told upstart.

“Obviously, we knew that they wouldn’t just take the 10 (players) because that would be a bit hard on the bodies, so we thought the squad might get extended to 12,” she said.

After receiving clarification from the league, teams were informed that they could take as many players as they desired to survive the full 60-game season. However, this would be at the team’s expense.

A few days before the Vixens were set to travel to the hub and begin their 14-day quarantine period, the training partners were notified whether they would make the trip north. With coaching staff making their selections based on experience, Barkmeyer and fellow training partner Cransberg were left behind in Victoria.

“I didn’t expect to go because I’d just come in and a few of the girls are a bit older than me,” said Barkmeyer.

“At the start of the year, you wouldn’t expect the training partners to be involved so much and get so many opportunities on court.”

Barkmeyer says that she and Cransberg initially felt worried about being forgotten by the team, and struggled for motivation when training at home. However, she says the team put in extra effort to reach out and ensure they weren’t excluded.

“They gave us little gifts before they went away and they’ve got little figures of our heads in their team room and on their bus, so we’re still there with them… sort of,” joked Barkmeyer.

Meanwhile, being forced off the netball court during pandemic restrictions has also meant battling to maintain her own training regimen. Taking shelter in her hometown of Bendigo, Barkmeyer borrowed equipment to set up a home gym and swapped throwing partners Kate Moloney and Liz Watson for her dad and brother in the backyard.

And now, heading into this weekend’s Grand Final, Barkmeyer is confident that her Vixens’ teammates can triumph over the Fever and become the first minor premieres in SSN history to win the last game of the season.

“I’m sure the girls will be very nervous, but I’ve had lots of confidence in them every week to get the win,” she said.

Despite not being courtside when the final siren goes, Barkmeyer believes this season has been a real team effort between families, support staff and officials working across Queensland and Victoria.

“It will be tough watching from home and knowing that if I was there, I would in the stands celebrating,” she said.

“They’ll definitely hold a celebration for the whole Vixens’ family when they get home. It’s been quite tough on a lot of the people who had to stay back at home, and they’re still doing a lot of work for the team to get them across the line.”

Ruby’s Vixens teammates will play in the Suncorp Super Netball Grand Final this Sunday 18 October. The match will be broadcast live on Channel 9 from 1pm AEDT.

Article: Emily Patterson is a second-year Bachelor of Media and Communications (Sports Journalism) student at La Trobe University. You can follow her on Twitter @emrosepatterson