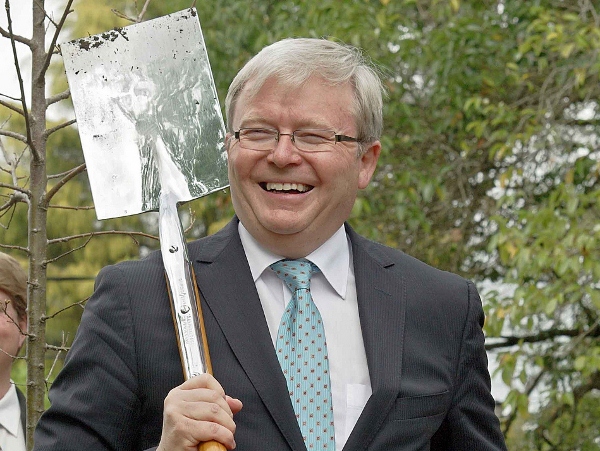 At least Kevin kept his word.

His party was publicly reduced to a farce, his leader was forced to withstand an opposition barrage, and ultimately, the Labor Party is doomed to being humiliated in the pending Federal election.

The dry kindling of leadership tension in Canberra was finally sparked into a full-blown blaze by Simon Crean yesterday afternoon. From the moment the now-deposed Crean uttered his mutinous syllables, we were off and running – hashtags and all.

Yet, after hours of ultimately empty chatter from many talking heads and not-so prophetic tweets from all angles, Labor’s alleged leader-in-waiting refused to step to the plate when push came to shove.

We shouldn’t be surprised.

In the aftermath of previous failed leadership challenges, Rudd made it clear that the only circumstance in which he would consider a return to the leadership would be if he was drafted by a significant majority and the position was vacant.

That simply was not the case yesterday in Canberra.

“I will be adhering absolutely to the commitment I gave to the Australian people and my parliamentary colleagues… I take my word seriously”, he said before slinking away to the backbench.

For all his gallant sentiments about being true to his word, the former prime minister didn’t challenge his usurper for a third time for one simple reason: numbers.

Which, according to all reports, Rudd did not have enough of. That fact that he waited until the proverbial last minute to rule out his return, proved that he was operating with his best interests at heart – and not that of the country or Labor party.

However, despite another proxy-defeat for Rudd, some continue to refuse to rule out a future challenge.

“The civil war will continue as long as Kevin Rudd and Julia Gillard are in the parliament.”

The predominant takeaway from a day of little consequence is that for some reason the spectre of Rudd – a Prime Minister who largely failed to perform – continues to haunt the Labor Party.

In the past 13 months, Rudd’s two failed attempts to retake his crown have inflicted unimaginable damage on his party, the one he supposedly has such deep loyalty towards.

With that in mind, only one course of action remains for Rudd.

He needs to bid farewell to Canberra, and relinquish any potential hopes he holds out for again leading the party. While discussing a potential return to the top, Rudd cryptically seemed to suggest that he would only step up should Prime Minister Gillard fall on her sword. But it’s clear that in fact he needs to impale himself.

He cannot be pushed, as any move would create further opportunity for the government’s detractors to destabilize the party. If the Queenslander is as behooved to his party as he claims, he would agree that a self-imposed exile was the best course of action for Labor.

But by refusing to step up to the plate today, Kevin struck out looking – without even taking a swing at his final fastball.