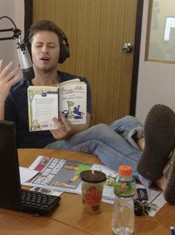 ‘Last week I MC’ed a wedding in a bar for a sex tourist to a working girl he’d met ten days earlier. It paid pretty well, but I was on breakfast radio the next morning. I would have preferred if it wrapped up earlier.’

Ryan Jon passed the remark off casually like it was an everyday occurrence, and to some extent it probably was. We were sitting at a sushi bar in Phuket, two streets away from Bangla Road, which had well earned the dodgy reputation in Thailand of ‘that place where the weird stuff goes down’. Life here tended to be a bit more interesting.

It was this ‘interesting’ life that was a major drawcard for the young Australian.

I have a vague recollection of Ryan as a student at La Trobe University, in a Broadcast Journalism tutorial that I taught in 2010.

While also studying a commerce degree with honors at Swinburne, he initially enrolled in a media studies graduate certificate at La Trobe University just to compete in volleyball. He won La Trobe their first gold medal in beach volleyball, and went on to represent the university at the World University Games in Siberia.

He was also an editorial team member of upstart.

He left me with the impression of a smart and capable student, and he was gracious enough to say that I was a decent teacher, despite the fact that I marked him hard on the final assignment.

‘I finally finished uni, and turned down a scholarship to study my PhD,’ Ryan says. ‘I tried to get ahead in radio, but it’s pretty hard to get a foot in the door anywhere. Finally I managed to get a decent job as a financial advisor, but I can’t say I miss the suit.’

Despite this initial success, Ryan was always drawn to moonlight in radio. ‘I would work in the evenings and on the weekends, for SYN radio and NovaFM. On top of all this I had a short film called Customer Service screening at the Melbourne International Comedy Festival. I had to stay at a hotel in the city for that month, just to sleep.’

‘One day a colleague at Nova noticed the ad for a radio presenter in Phuket. It’s the job I’d always wanted, I just had to go halfway around the world to get it.’

‘When I told my family the decision they were surprised, and didn’t entirely approve. I got raised eyebrows from the people at work. People leave the finance industry all the time, but for a job working the breakfast shift on radio in Thailand? That was a new one for them.’

The transition didn’t come easy – not only was he in a new country where he didn’t know anyone, but Phuket Live Radio was a small station, run on a small budget. Ryan admits that his dream job didn’t come with the dream salary attached.

‘I’m paid in Thai bhat (currency), so I’m earning maybe a third of what I did in Melbourne,’ he explains. ‘It’s a good wage as far as a Thai is concerned, but not if I were living in Australia.’

While he won’t rule out a move back to Australia in the future, for now he’s making the most of the opportunity at Phuket Live Radio – getting valuable experience that is hard to come by for someone his age.

‘There’s a lot of opportunity here if you want to take it,’ Ryan says. ‘There’s plenty of people and venues who will pay well for an MC who can speak English with a microphone, so the extra money from that helps. There’s a lot less competition in Phuket than there is in Melbourne.’

The drawback? There’s one. ‘More sleep would be good. Breakfast radio means an early morning, and everything in Phuket means a late night. Sleep is my new currency.’