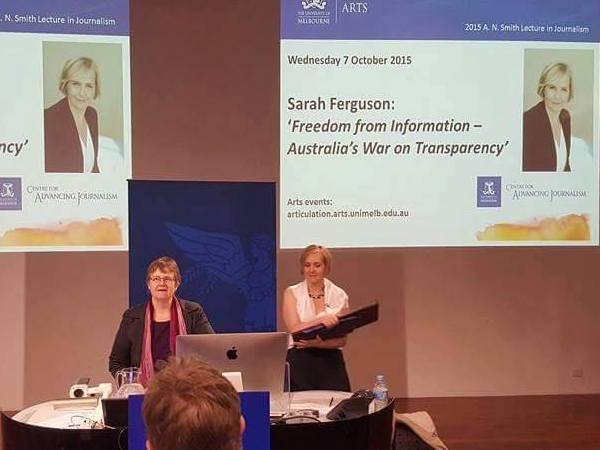 The ‘fourth estate’ is a rather endearing term, used widely to describe the important role the media plays in society.

Neatly summed up in his 1837 book, The French Revolution: A History, Scottish philosopher, Thomas Carlyle, observed the correlation between the rise of democracy and an independent press.

In this optimistic and altruistic phrase, that has been accepted for over a century, the timelessness of two words has become questionable.

What exactly is an ‘able editor’?

As the hegemony of market capitalism continues to infiltrate editorial content, it’s become difficult to identify whether there are any editors who remain truly independent.

Are editors still able to perform their role in contributing to a functional fourth estate?

The answer is yes, and the person who answered this question spoke at last night’s A.N. Smith lecture in journalism.

Her name is Sarah Ferguson.

Ferguson is best known for her work at the ABC, where she recently wrote and produced The Killing Season, a documentary about the internal turbulence of Labor’s Rudd and Gillard governments.

But Ferguson’s place of employment is fundamentally irrelevant when considering her value to democracy.

She says that while she happens to embody the ABC’s charter, she is not governed by it.

Rather, her ruthless self-regulation, and complex understanding of people and society, link to her unyielding thirst for the truth.

This allows her to create such compelling work.

“You can kid yourself the price is not too high, but you are kidding yourself,” says Ferguson, speaking about journalists succumbing to the contractual obligations of media departments.

Contrary to public debate over the ABC’s access to government and its members, Ferguson’s demand for transparency was not singularly directed towards one organisation.

In fact, her call to arms was to the fourth estate itself.

“I think we have to push back collectively against these demands,” she says.

Ferguson cites a story she investigated about live animal trade, where no interviews were granted, and the company in question prepared its own pro-active media plan.

“A year later, someone leaked to me the company’s media plan for countering our story – what information to release and when, what language to use, a strategy for using the rural press to undermine the story, with names of willing journalists,” she says.

“Organisations are not just determined to control the message, they now have the means.”

Ferguson’s strict ethical compass has allowed her to navigate through the maze of publicity and three-word slogans towards the entire truth.

She has managed this despite the attempts of governments, high profile organisations and other journalists to undermine due process.

When reflecting on the work of two of her idols – Russian war correspondent, Vasily Grossman, and American journalist, Nellie Bly – Ferguson offered an insight into the two questions she finds most pivotal to her work.

“I wonder, if I met Vasily Grossman or Nellie Bly, what I would tell them about the work that I do. Would I be able to say that I give voice to the weak and marginalised in the way that Nellie did? Could I say that I had the same unflinching eye for truth? The answer is clearly not as they did, but still, I think I’m asking the same questions,” she says.

Those ‘able editors’, who can both detach themselves from the notoriety that comes with being a modern journalist, and, remain committed to answering those questions, will contribute to a fourth estate that democratically moderates and regulates.

Sarah Ferguson is certainly one such able editor.