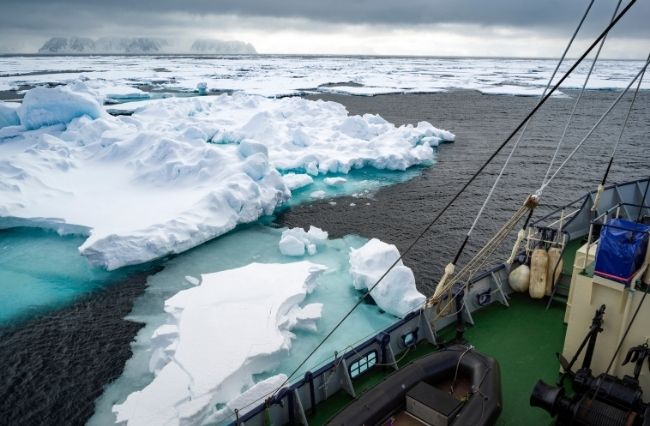 A large chunk of Greenland’s ice cap has broken off in the Arctic’s far north east. The area of ice is estimated to be 110 square kilometres in size, and scientists warn it could be evidence of rapid climate change.

The report comes as scientists outlined the climate regime had shifted in the region, evident by trends of escalated temperatures, melting ice and more prominent rainfall. The new research on the region was published on Monday by atmospheric researchers Laura Landrum and Marika M. Holland in the journal ‘Extremes become routine in an emerging new Arctic’ on Nature Climate Change.

The section of the Greenland ice cap that broke off is part of the Spalte glacier in the Nioghalvfjerdsfjorden fjord, which is roughly 80 kilometres long and 20 kilometres wide.

The thick sheets of ice once blanketing part of the Arctic ocean had turned into layer of soft slush seen floating above the waves.

The Geological Survey of Denmark and Greenland (GEUS) annual survey said that end-of-melt-season changes for the Arctic’s largest ice shelf in Northeast Greenland are measured by optical satellite imagery.

“We should be very concerned about what appears to be progressive disintegration at the Arctic’s largest remaining ice shelf,” GEUS professor Jason Box said.

Captain Paul Ruzycki, Canadian founder of Polar Navigational Services, has 35 years of experience navigating ice infested waters. From the deck of a research ship Ruzycki spoke of how rapidly the region has changed since 1996.

“Not so long ago, I heard that we had 100 years before the Arctic would be ice free in the summer,” he said. “Then I heard 75 years, 25 years, and just recently I heard 15 years. It’s accelerating.”

The Arctic temperatures have been rising resulting in shrinking ice cover that has been associated with climate change, revealing some of the lowest recordings in recent years.

This year’s minimum is set to be revealed in a few days time and it is expected to be one of the lowest expanses over four decades. The record low from September 2012 saw 3.41 million square kilometres of ice cover after a cyclonic storm broke up the remaining ice. 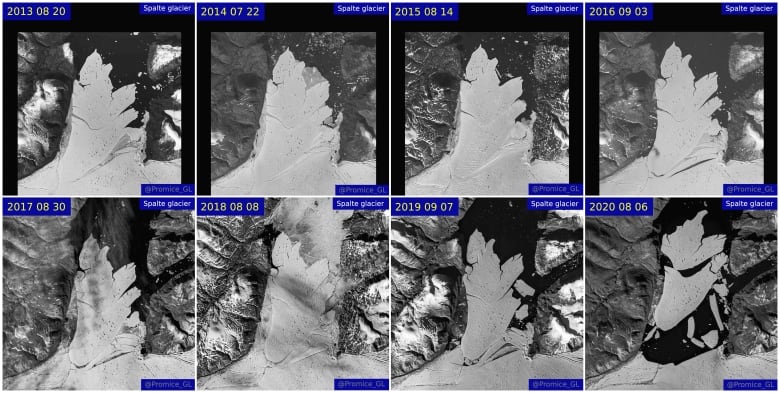 A combination picture shows satellite images of the Spalte glacier disintegration between 2013 and 2020. (EU Copernicus and GEUS/REUTERS)

Landrum and Holland’s research at the National Center for Atmospheric Research analysed data from 1950 onwards to project climate scenarios up until the end of the century. Computer simulations were used to predict the future of the Arctic, taking on the assumption that greenhouse gas emissions would continue with a high trajectory.

“The new climate can’t be predicted by the previous climate,” Landrum said. “The year-to-year variability, the change in many of these parameters, is moving outside the bounds of past fluctuations.”

A study from August showed that Greenland had lost a record amount of ice in 2019 with 532 billion tonnes of melt.

“Not only is the Greenland ice sheet melting, but it’s melting at a faster and faster pace,” said study lead author Ingo Sasgen, a geoscientist at the Alfred Wegener Institute in Germany.

Photo: Icebergs by Christopher Michel available HERE and used under a Creative Commons Attribution. The image has not been modified.