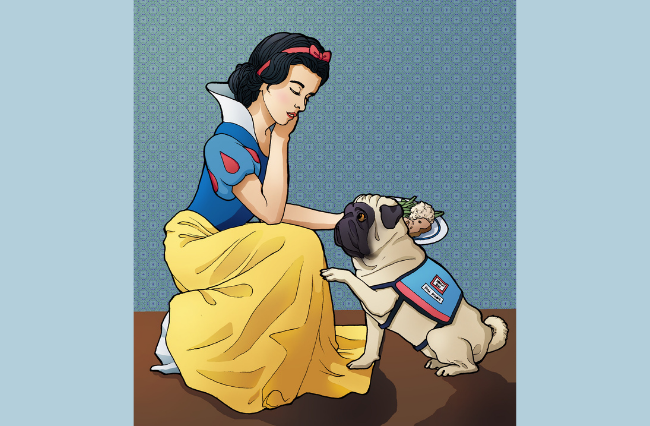 With the new exhibition ‘Disney: The Magic of Animation’ coming to the Australian Centre for the Moving Image (ACMI) in May, thousands of people are planning to revisit their childhood dreams. The exhibition is dedicated to Disney’s animation, which dates back to 1928, showcasing characters that taught us important values.

Entering a ball with a handsome prince is what almost every little girl dreams of, the fantasy created for most people by Disney. However, there was one little girl sitting at home who could not dream about herself being in those fantasy worlds.

Disability activist Hannah Diviney has always envied Disney princesses. Growing up with cerebral palsy, there were many times that she felt invisible as Disney did not provide a princess that reflects her reality.

“It would’ve shown me that someone who looked like me was worthy of having adventures and worthy of being the main character in her own story, which is something I have struggled with for a long time because I had no frame of reference for it,” she tells upstart. 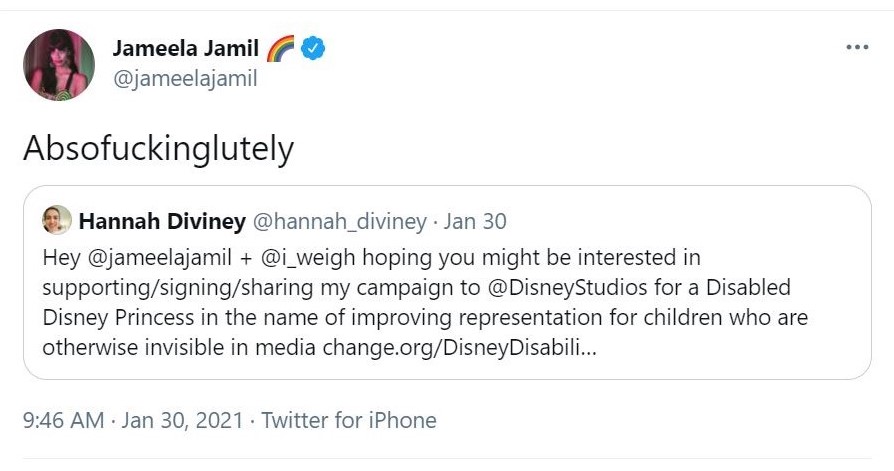 Last December, Diviney launched a petition on change.org that has received almost 35,000 signatures, with a letter to Disney stating there should be a disabled princess. High profiles including Jameela Jamil, Magda Szubanski and Martha Hun could see Diviney’s vision for Disney, and signed the petition too.

“They have the most visibility which means they have the greatest room for impact. A disabled Disney Princess would show disabled kids someone who was like having adventures, forming friendships, falling in love and generally being the hero of their own story,” she says.

Pixar’s Inside Out in 2015 is what led Diviney to push for a disabled princess. This children’s movie demonstrated that mental illnesses and emotions can be revealed to young children through movie magic.

Although Disney has not formally announced a Disney princess with a disability, a few might say that Disney are taking small steps.

According to Disability Studies Quarterly Elsa from Frozen was officially the first Disney princess to have a disability. Elsa’s disability is encoded with her magical ice powers, dealing with anxiety and fears that seem to take over her at certain points.

The film then used the device of two princesses; Anna with a typical princess journey and Elsa, with a narrative that depicts the isolation and ostracization that people with disabilities might experience. Elsa suddenly went from a villainous queen to a disabled teenager.

“Mental health and illness are always going to look different for everyone, but in my experience of anxiety and panic, I think Elsa is fairly accurate representation for what that can feel like and what some of the messaging toxic or otherwise can be in our brains around being in control,” Diviney says.

Disney have struggled to create real diversity in their characters in the past. Their depiction has been described as problematic and visually stereotypical. Dopey from Snow White and Seven Dwarves (1937), is an example of this. He can be viewed as disabled, however it is argued that he is drawn as a human with dog mannerisms. Drawing comparisons between disabled people and animals was not well received by audiences.

For American mental health advocate and illustrator Calion Smith, formerly known as Arien, his idea of a Disney princess is one that has a clear disability and that faces many challenges. However, what he does not want to see is a false reality with a top-notch ending, because disabilities don’t.

“Not magically getting better – that’s not a realistic tale,” he tells upstart.

To help his peers, and viewers of Disney, Smith drew famous Disney princesses with different disabilities. He incorporated service dogs to show a reality that seems to go unnoticed in the media. The public response to Smith’s artwork were similar to Diviney’s. Conversations were sparked, posts were shared, and viewers who related to these illustrations saw themselves, finally in the fairy tale world of Disney.

“I received so many messages saying I brought tears of joy and relief to people’s eyes just with these illustrations,” Smith says. “I hope if Disney sees this, it’s a call to action and representation. Disabilities need to be shown, it affects so many real people.”

Even if this end goal is not met, Diviney and Smith both say discussion about representation is a total win. Media coverage is crucial for the disability community, as there are not a lot of direction for kids to see what disabled adulthood could potentially look like. Diviney thinks that sometimes children with disabilities grow up and realise that the world is not always designed for them, due to what they watch on television, and the magical world that they see.

“Our community is really hungry for representation and inclusion, particularly of a colourful and positive type,” she says. “If the petition moves someone to start thinking differently or get talking around the dinner table, then I’ve done my job as a disability advocate.”

Photo: Snow White with a service dog supplied by Calion Smith. This image has been modified.