Halfway along a wide avenue to the west of Manhattan stands a red-bricked hotel. The facade is half-Victorian, half-Gothic, with wrought-iron balconies. You can stay here for a week, a month or a year. Many settle down for life in rooms that are nothing like traditional hotel rooms, which residents designed as works of art, created in their own image. Don’t expect a collection of bath oils, a full mini-bar or Bible in the drawer of the bedside table. 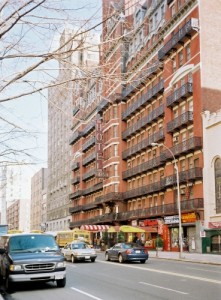 The Chelsea was the type of hotel where you could check in with a case of cheap Scotch and sit in your room, unapologetically smoking a carton of cigarettes, while you stared out at the gritty Manhattan view, working yourself up into a fit of angst, contemplate writing a novel, think about taking up painting, perhaps sending home a letter that you’ve decided to stay in New York permanently, and please forward all your mail to the Chelsea.  This is what possibly happened to Thomas Wolfe when he wrote You Can’t Go Home Again while living in Room 831.

In its relationship with the various art movements that flowed through New York, the Chelsea was always a noteworthy recipient of those fringe and sometimes mainstay figures that were active then. The list is long and fearsome, a parade of the famous, the infamous and the barely breathing who would make their way to the rickety elevator by the desk.

Chelsea residents all encountered tragedies and comedies. They wrote short stories, movie scripts and novels and painted their pictures. They completed their art within their heads, long before they actually took form. Some had fatal endings.

What was is about excessive drinking and the Chelsea that went together so well? While Wolfe lived at the Chelsea, he worked hard at his drinking. In the ’50s, Brendan Behan moved in after he was thrown out of the Bristol Hotel for his drunken antics. He continued them at the Chelsea while he wrote Brendan Behan’s New York. During his residency at the hotel, the poet Dylan Thomas — who reputedly inspired a young Robert Zimmerman to change his name to Bob Dylan — uttered his last words in Room 206, ‘I’ve had 18 straight whiskeys, and I think that’s the record’, before falling into a fatal coma. Charles Jackson — another Chelsea resident — wrote The Lost Weekend, the tale of a man destroyed by drinking.

The ghosts of other writers who’d lived at the Chelsea wander the hallways: O. Henry, Sherwood Anderson, Eugene O’Neill, Tennessee Williams and Arthur Miller, who supposedly moved there from the Plaza because he hated feeling as if he needed to wear a tie to go downstairs and check his mail.

The whole gang of Beats lived there on and off while in New York: the poet Allen Ginsberg and William S. Burroughs, who, under the influence of something decidedly stronger than whiskey, wrote Naked Lunch in his room. In another room at the Chelsea camped another world-class drinker, Jack Kerouac. Revved on Benzedrine, and wailing on a typewriter equipped with a special roll of endless Teletype paper, he cranked out On the Road in 20 days.

Painters also seemed to favour the Chelsea, some even donating their artwork to cover past-due bills. Jackson Pollock, Larry Rivers, David Hockney, Mark Rothko, Willem de Kooning all stayed at the Chelsea, favouring the upper suites for their better light. Robert Mapplethorpe was filmed in one of the studios getting his nipple pierced—an event of sufficient art-world import that it was later screened at the Museum of Modern Art.

‘I remember you well in the Chelsea Hotel/ You were talking so brave and so free/ Giving me head on the unmade bed/ While the limousines wait in the street/ Those were the reasons and that was New York/ I was running for the money and the flesh/ That was called love for the workers in song/ Probably still is for those of us left.’

Joan Baez was there, Donovan, Jefferson Airplane, Big Brother and the Holding Company, Country Joe and the Fish, The Band, Lovin’ Spoonful, Buddy Miles, Patti Smith, the Allman Brothers, The Winter brothers, Johnny and Edgar. Also in attendance were Quicksilver Messenger Service, Frank Zappa and The Mothers Of Invention, Iggy Pop and The Stooges. Jimi Hendrix lived, loved and experimented here, with drugs and other special treats.

Try hard and you can imagine the euphoria of somehow stumbling into the Chelsea, finding yourself surrounded by the people who at that time were gods.  You can envision the scene: wild music, borrowed guitar strings, borrowed groupies, LSD, Acapulco Gold, Panama Red, sex, drugs and rock ‘n’ roll at its zenith.

The Chelsea also has a place in film history. It was the home of Andy Warhol‘s stars, Viva and Edie Sedgewick, and the location for Chelsea Girls, his film featuring the transvestites Candy Darling and Holly Woodlawn. It was the setting for Sid And Nancy, another very Chelsea story commemorating Sid Vicious, bassist of the Sex Pistols punk rock band; Vicious stabbed his girlfriend, Nancy Spungeon, to death in Room 100. Arrested under suspicion of murder, Vicious died shortly thereafter of a heroin overdose.

If you were indigent and had a partying nature, then it was imperative you found a place for the night. If you didn’t already have a room to go to, then you would surely know someone who knew someone who knew where the action was, and this was invariably at the Chelsea. This partying vortex echoed the same moveable feast one encountered at Warhol’s Factory, when Andy and Edie, the young poet and photographer Gerard Malanga, and Andy’s ‘discovery’ Ingrid Superstar moved en masse around Manhattan. It was the networking style of the day.

Another member of Warhol’s Factory, Danny Fields, held an Assassination Party on the Thanksgiving after JFK’s assassination—to lift people out of their gloom. There he met Nico, a Teutonic vision of an ice-maiden, and introduced her to Warhol. He also took Leonard Cohen to visit Edie Sedgewick at the Chelsea. Edie was the daughter of an owner of the Southern Pacific Railroad. Leonard left her, greatly concerned at the way her room seemed to overflow with candles in what looked to him like a foreboding vision of the future. He wasn’t wrong. Edie was soon burnt out of the Chelsea and out of her apartment in separate incidents.

In 1967, the young designer Betsey Johnson resided in a long narrow room with a small bed at one end and sewing machine at the other. Over a sleepless three days, she completed the costumes for Ciao Manhattan, and although they were the most disturbing costumes she had ever designed, she became instantly famous for her mini-skirt (simultaneously with Mary Quant in London) and the Story of O dress.

Since Warhol’s movie, Chelsea Girls, the hotel has become a mythical place, exciting the imagination and continuing to attract artists from all over the world. As soon as you enter the foyer, you will discover a fabulous collection of antiques, period furniture and paintings signed by famous artists. Stairs with an intricate wrought-iron banister lead up to an antique glass dome.

The Chelsea is no longer the lair of lunacy it used to be but the atmosphere remains unique, disconcerting, secluded and intimate. It is just like a family house — albeit one belonging to the Addams family.