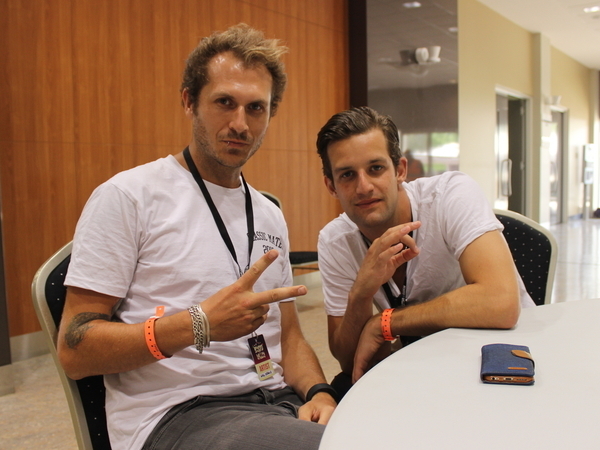 In 2011 the three Margin brothers Zaac, Sam, and Elliott as well as two mates Scott Baldwin and William Zeglis from the small country town of Menangle, New South Wales, got together and formed The Rubens.

That same year their debut single ‘Lay It Down’ came 57th in the Triple J Hottest 100 while their next single, ‘My Gun’, came 10th as well as picking up a nomination for Best Music Video in the 2012 ARIA Awards.

Fast forward to the present day and the boys are fresh off winning the Triple J hottest 100 of 2015 with the title track of their second album ‘Hoops’.

Upstart sat down with the guys to talk about their meteoric rise.

You guys made it big after your debut self-titled album reached No. 3 on the ARIA Charts and was nominated for a J Award for Album of the Year. After the aforementioned success of your debut album, what was it like touring overseas? Was it all it was cracked up to be?

Sam: It was fun; we had a really good time because we had never done it before. We did have some issues with our first single overseas because it was called ‘My Gun’ and there was really big gun issues at the time – there was the Sandy Hook massacre and suddenly anything with guns in it was a no-no on the radio so we were like ‘oh shit’, but yeah, besides that we had heaps of fun. Asia was the best; it was all new to us at the time so it was just like a holiday only we played music here and there. We spent a day or two in each country – just the whole thing was amazing.

Will: We played in Taipei at a festival that got completely rained out. They didn’t have the OH&S laws that we have here; all the instruments were getting wet (laughs).

Sam: I was getting electric shocks from my guitar.

Will: Yeah, it was real sketchy man – it was a great festival, just a bit different to what we expected.

Do you think there’s any sort of misconception from the general public’s point of view when it comes to the supposed rock star lifestyle?

Sam: Totally, I think there’s massive misconceptions but it’s awesome in a way that you wouldn’t realise. I guess it’s harder to look at it from a different perspective now and I guess you get used to things a little bit, so you kind of have to remind yourself of how awesome it actually is. I guess a good way for us to remember is to take a family member on tour or if they come to a festival or some mates turn up and you can see the look on their faces when they say things like ‘oh you get free beer!’ or just little things like that.

Right before you in a sense ‘made it’, was there any doubt lingering in the back of your mind before that?

Will: That’s always the thing you know, there’s no such thing as ‘made it’ – we still feel privileged to play these shows, even now we still feel nervous before we play. I think that’s human nature.

Sam: Beforehand I wasn’t that confident. I mean, I thought we were on to something and I thought we had a cool band maybe but that was it.

Will: Yeah, you never think that. You might think you’ll get a little bit of radio play but, even now when you hear it on the radio, it’s still a spin out to hear your songs.

Can you take me through your creative process?

Sam: The initial idea generally starts with Elliot or me – we write the lyrics so that’s sort of how it starts and, from there, I don’t know, it happens differently every time. Once we all start working together it might be that Zaac comes up with an awesome guitar riff which changes the whole song or someone goes ‘wait a second this section shouldn’t be here’ or whatever, so it has no set order. If someone has a cool idea we’ll use it, whether it be at the start of writing the song or at the end during recording.

Sam: The record name definitely is but the song is something different – it’s more about going around in circles in a relationship. We liked the sound of the name and the way it looked so we were like ‘right that’s going to be the name for the record’. It relates to heaps of things in the making of the record – jumping through hoops for labels and the bullshit going around in circles trying to get a record made. I think maybe it’s a little bit of a bitter name (laughs) but we’re happy with it.