One in five Australians improvise on sanitary products as period poverty continues. 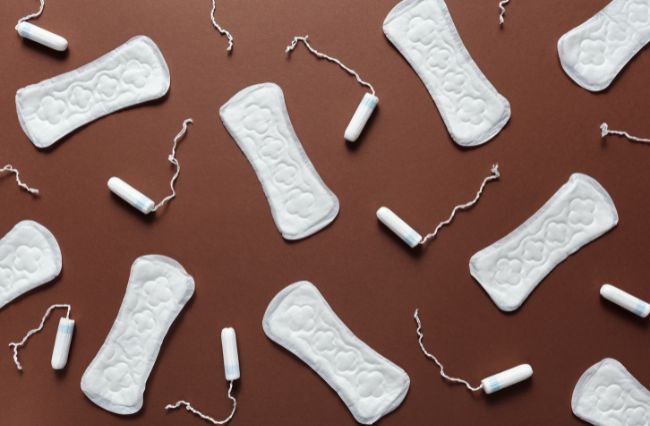 It’s a Friday night and you’re out at the pub. Not only have you just got your period, but you don’t have a tampon or pad on hand. Many can relate to that awkward call-out in the bathroom to see if anyone’s got one. Then there are those stuck at home while their friends are out because they can’t afford period products.

In Scotland, there’s no need to stay home or ask strangers for pads from the bathroom stall, because sanitary products are now free and accessible in public spaces.

Scotland is first country in the world to provide free period products for all, after Monica Lennon, Member of the Scottish Parliament, introduced the Scottish bill in 2019. In Australia, there are talks the ACT may implement a similar bill, however there are currently no plans for nation-wide legislation.

Lauren Sinclair, a Glasgow resident, says free period products – including eco-friendly options such as menstrual cups –are now available in cafes, libraries, and most public spaces. There are even loose products in public toilets, accompanied by boxes you can take home.

“It’s definitely made a big difference to me and other people that I know,” she tells upstart.

“I’ve got a very regularly heavy period that it was becoming unaffordable, because you’re talking like five pounds [approx. $8.50 AUD] for a box of tampons, and I would go through them really quickly.”

Here in Australia, there has been some progress towards making sanitary products free. So far most states are beginning to provide them in government schools, and former Australian Minister for Health and Aged Care, Greg Hunt, introduced a bill to remove the GST from sanitary products that came into effect in 2019.

More recently, Suzanne Orr, Member for the Yerrabi electorate in the ACT, the Period Products and Facilities (Access) Bill 2022 , which she says is currently at least six months away from coming into effect. Orr’s bill, which would see period products available freely, would also legislate accessible information on menstrual hygiene.

“We know that a lot of people and a lot of feedback that we got was that people have trouble accessing just the basic information and making sure that they’re right,” she tells upstart.

Orr says that period poverty, which is the lack of access to sanitary products, menstrual hygiene information, and general hygiene facilities, is more prevalent in Canberra than many realise. In fact, she says that 15 percent of Canberrans have experienced period poverty at some point in their life.

“Given we’re quite an affluent city, that’s actually quite a large number of people, something that shouldn’t be a problem for our community.”

According to the Period Pride Report conducted by Share the Dignity – a charity that aims to supply people with free period products – almost half of respondents admitted to wearing products for more than the medically advised four hours because they didn’t have any left, which can lead to higher risks of toxic shock syndrome.

It also found that one in five people have to improvise products during their period, which includes using items such as socks and toilet paper in place of period products.

Dr Jane Connory, Swinburne University lecturer and author of the Period Pride Report, says that improvising on products like this can impact menstruating individuals in many ways, not just physically.

“These things can be ineffective and uncomfortable and can lead to people missing out on school, work, sporting activities and social opportunities – directly affecting their ability to earn a living, get an education and maintain their physical [and] mental health,” she tells upstart.

According to the survey in the report, almost half of respondents missed classes due to their period, and four out of ten people missed work. In addition, over 52,000 respondents have trouble buying period products due to the cost either sometimes, regularly, or every month. Connory added that some are having to use Afterpay for sanitary products or even steal them, which can leave them with debt and criminal records.

University student Jamie Cantwell says that the rise of inflation is only making it harder to purchase sanitary products. She says that sometimes she has to choose between buying sanitary products or spending the money on food instead.

“There’s been a couple of times where we’ve literally only had the money for the food, because the food’s been more expensive, so I’ve had to go without [sanitary products],” she tells upstart.

Cantwell says that while you might be able to get by without sanitary products, it’s certainly not ideal. She says that Australians should have free access to period products, as it is a fact of life for those with uteruses.

“Biologically we can’t actually help what happens to us as young girls, as women.”

Brittiny Edwards, Share the Dignity’s Marketing and Communications Coordinator, says that in times of financial hardship, period products are often the first thing to be left out of the shopping cart.

“We have heard of families having to choose between paying their mortgage repayments or feeding their kids. This Dignity Drive we have the highest number of period products requested by our charities ever, with over 235,000 products requested,” she tells upstart.

“This is a decision nobody should have to make. Period products are essential items, not a luxury,”

While the ACT seems to be going further, it is unclear whether other states will follow suit. Greg Hunt says it is now up to future governments to decide.

“It would be a matter for a future Government to determine whether they wished to go further and remove or reduce costs for either all people irrespective of income or for concessional card holders,” he tells upstart.

If you’re looking for free sanitary products, look out for your nearest Dignity Vending Machine. Alternatively, head over to Ask Izzy, which can help you find everything from period products to housing.

Photo | “Sanitary Napkins and Tampons on the Brown Background” by Cliff Booth available HERE  and used under a Creative Commons License. This photo has not been modified.