Sports stars that have taken upon themselves to protest in the past have often been met with retribution from the fans, should this attitude change? 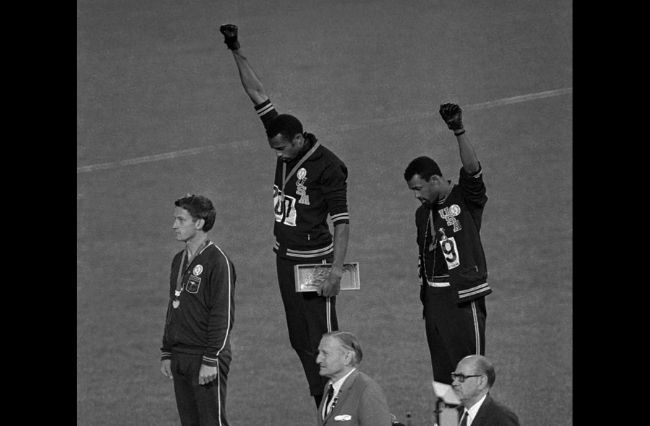 Sport and politics don’t mix, or at least that’s what some sporting organisations want you to believe.

Since its inception, the Olympic Games has had a rule that states athletes are not allowed to protest while participating at the games.

While no other organisation has such stringent rules, the act of protest by other athletes is still widely frowned upon.

Examples of such behaviour are rife in sporting history, highlighting that sport mixed with protest can still have ugly consequences.

Whether they be solo athletes such as American 200 metre gold and bronze medallists John Carlos and Tommie Smith receiving death threats after their black power salute at the 1968 Olympics or Australian swimmer Mack Horton being officially warned for not standing on the podium with convicted drug cheat Sun Yang at the World Swimming Championships in 2019.

Or individuals in team sports such as Adam Goodes who was booed out of the AFL after his war dance celebration in 2015 and Colin Kaepernick who is still unable to attain a place on an NFL roster after a series of kneels before the national anthem in 2016.

According to Associate Professor of Sport Management Daryl Adair as the amount of money in sport has grown so has the power of the athletes to champion social change.

“When sport was characterised by amateurism with athletes who were part-timers, it had limited profile and influence in society,” Adair told upstart.

“As sports have commercialised, featuring athletes who are full-time professionals, the profile of leagues, competitions, and participants has grown exponentially, especially with the rise of sports broadcasting and more recently, social media,” he said.

While protests have always occurred within sport the idea of athletes and sporting organisations using their platform for change is a relatively new phenomenon.

“Sports have increasingly made decisions to be as inclusive as possible. This has meant that groups on the margins of society, people with disabilities, varied sexual orientations, Indigenous, and so on, are made welcome by way of policy and practice,” he said.

The disparity between the traditionalists and the progressives allow for a large grey area when considering protest and sport.

Adair believes that sporting codes should use their powerful players unions to set clear direction around how players can protest without fear of retribution.

“Sport organisations should open up dialogue with athletes about issues of concern to them and work together in a respectful way to develop agreed upon protest protocols. It’s okay to set boundaries if they are consented to,” he said.

One of those powerful player unions is the AFL Players’ Association (AFLPA).

The AFLPA, the official voice of all AFL players past and present, is the direct line between the players and the AFL.

Part of their role is to coordinate education and support of players in all sorts of social justice issues.

“The AFLPA have a number of programs and services that help the players understand their own, and by extension, the community’s, issues, including gambling/drug abuse and addiction and mental health and wellbeing,” an AFLPA spokesperson told upstart.

“Players are also educated on issues such as domestic violence and racism and discrimination, which are mostly executed at club level.”

“These programs and services ensure players have an awareness of the issues at a basic level, allowing them to individually explore these interests further.”

Following the booing of Indigenous dual Brownlow medallist Adam Goodes after his spear-throwing incident against Carlton in 2015, the AFLPA saw an opportunity to strengthen their strategy on racism.

“Adam’s experience, along with other Indigenous members, led to a discussion at the 2019 AFLPA/AFL Indigenous All-Stars Summit, where players gave us permission to jump in and call out racist behaviour on their behalf without their consultation, which was a change to the previous strategy,” they said.

These changes along with recent developments in the Black Lives Matter movement worldwide have slowly begun to change the attitude of sporting organisations in regard to protesting in sport.

All AFL players took a knee prior to the commencement of their first games after the restart of the season to demonstrate their solidarity with Australia’s Indigenous community.

“Kneeling for Black Lives Matter at the beginning of the season was a player-organised initiative, driven mostly by our Indigenous Advisory Board with each member organising their teammates leading into their respective games,” the AFLPA spokesperson said.

Similar initiatives occurred in the NBA, National Hockey League, and Formula One as their respective seasons restarted.

Photo: 1968 Black Power Salute by Anonymous available HERE and used under a Creative Commons Attribution. The image has not been modified.

Article: Miah Shannon is a third-year Bachelor of Media and Communications (Sports Journalism) student at La Trobe University. You can follow him on Twitter @Miah_Shannon