The Victorian Junior Female Triathlete of the Year only started the sport in 2019. 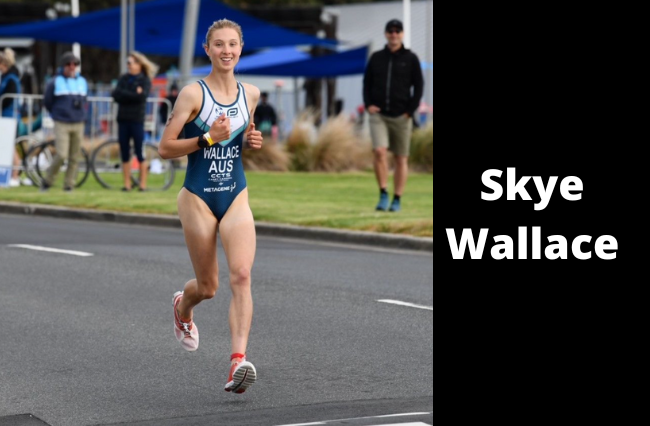 4:15am starts, 15 hours of training a week, and no days off, including Christmas. These are just some of the things 18-year-old triathlete Skye Wallace experiences on a regular basis.

The English-born Australian said that she feels a great sense of pride in representing Australia at the upcoming championships.

“I’m pretty proud that I managed to do it. Like it’s nice to know that all the dedication [and] hard work [is] paying off,” Wallace says.

Prior to her triathlon career, Wallace played representative basketball. But after the culture started shifting around her, the Victorian Junior Female Triathlete of the Year transitioned into the sport in 2019. Despite having little experience in her childhood, Wallace was eager to pursue triathlon.

“[I] always enjoyed cross country at school, and I [did] one of the Weet-Bix little kid triathlons a few years ago. I hadn’t thought anything of it but then I thought, ‘oh I enjoy cross country but I’ll probably get bored of just running’,” she says.

“So, I thought ‘oh what about triathlon?’ Then I didn’t really think anything of it. Like when I first started out, I was like ‘oh yeah I’ve got a bike’, like I can swim, I’ll have to do that, so then it just progressed from there.”

Wallace then registered at her local club, Casey Cardinia, and has been addicted to the sport ever since. She said that the triathlon community is what kept her coming back to triathlon in the early stages.

“Once [I started doing triathlons], I wanted to keep going, and it’s the whole community around the races, like everyone is friendly with each other, and it’s like the fact that you’ll have the professionals race on the same course, you’ll have like 80-year-old men doing it, everyone’s a big community together which is really nice,” she says.

It wasn’t long until Wallace was racing alongside some of her idols. The 18-year-old said that she had to remain level-headed coming up against these stars.

“I did the national championships in Devonport a few years ago, and I felt really star struck to be honest because we’re racing, with the big idols of the sport and then they’re in this same race as you…but then you’ve also got to remember that you’re there yourself,” she says.

COVID-19 negatively impacted millions of students around the world. For Wallace, she had to juggle VCE, alongside her triathlon commitments. However, Wallace said that she benefited from the lockdown, stating that her triathlon training became a release from school.

“I think overall in lockdown, I did pretty well. I enjoyed the freedom of school being online in the fact that I could do the work when I wanted, rather than having to be at school this time, and it also meant that I could do my training around school.”

“I could do my training and then fit in this school when I needed. So, I think that helps.”

Now Wallace is balancing her triathlon with a start in a physiotherapy career, undertaking the degree at La Trobe as part of the Elite Athlete Program.

The two-time National Triathlon Championships participant joined Momentum at the start of this year and says that under well renowned triathlon coach Michael Harvey, Wallace hopes to achieve the same feats that Harvey’s athletes have achieved.

“I’ve just moved over to Momentum at the start of this year…I’ve changed coach, so he coaches a few Olympic athletes… So, I’ve moved there in the hopes that he can teach me more, progress me further,” she says.

Jackson Mansell is a second-year Bachelor of Media and Communication (Sports Media) student at La Trobe University.  You can follow them on Twitter @jackson_mansell.

Cara Jeldres-Lovallo is a second-year Bachelor of Media and Communication (Journalism) student at La Trobe University.