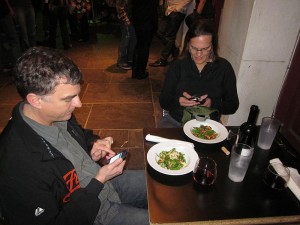 I contemplate whether or not I should turn back to get it and risk being late. My better judgement decides against it and I continue on my way to work, the whole time stressing that I could miss a vital part of information because I don’t have my phone; what if someone important tries to call me or needs me and they can’t get onto me? I fret for the whole day, feeling uneasy until I finally come home and see my phone: no messages, one missed call that was not important, and no emergencies.

For many, the feeling of being ‘lost’ and somewhat alienated from the rest of the world because they don’t have their phone on them is not uncommon. Earlier this year, studies indicated that 88 per cent of Australians own a mobile phone, with a further study showing that more than half of us own a smart-phone. Not surprisingly, 74 per cent of us do not leave home without our phones and 61 per cent use phones at restaurants and social settings.

Gone are the days when we used to call each other on the home phone to organise a catch up, always arriving on time because we had no way to let the other know if we were running late. Nowadays, if we’re running late for a friends gathering, it’s a quick text and everyone seems to be spending more time on their phones than making actual conversation with one another anyway.

As we start working full-time, get tied down with assignments and moving out of home, it becomes harder to meet up with friends. For me, seeing some of my closest friends is now a rare occurrence and when we do finally catch up, there is always one friend who can’t stop texting at the table or checking their Facebook, not to mention interrupting conversation to take a photo of the food for Instagram. Even on a recent overseas trip, my friend spent the entire time taking ‘selfies’ on the beach.

Last year marked the 30th anniversary of the mobile phone. Even after all this time, Australians admit to feeling panic stricken within five minutes of thinking they had lost their phone and Generation Y admitted to checking their phones as soon as they roll out of bed.

But it’s not just Australians that are physically attached to their phones. In correlation with the fifth anniversary of the iphone, mobile giant Gazelle surveyed 1,000 American iphone users. The results showed that 85 per cent of smart-phone users took their phones with them to the toilet  and 65 per cent admitted that their phone was the number one device they could not live without.

For many of us, this is not out of the ordinary. Most of us sleep with our phones within reach, walk aimlessly through car parks texting, completely oblivious to who or what is coming towards us. And how many of us have seen those red and blue flashing lights behind us as we get caught using our phones while driving because we can’t wait that extra five minutes until we get home?

The advancements in technology have made it possible for us to do almost all of our daily chores on our phones; there is an app for almost everything. ‘iAlcohol Life’ can tell you your blood alcohol content, every supermarket and major bank has its own app, and many of the latest smart-phones even have a personal assistant (Siri) to help you answer questions. It seems that the purpose of mobile phones has gone beyond being simply a means to converse with someone or in case of an emergency. Phones have become like a security blanket for most of us and their usage is like that of  a cigarette -they are addictive and have been reported to have health implications.

Our phones have become so important to us that they are interfering with our personal lives; we have forgotten how to communicate with others and have become anti-social. Author of The Good Manners Company, Anna Musson, suggests: ‘The rule of thumb is that the person who is in your immediate company takes precedence over the phone. Accessing your phone for entertainment or accessing social media sends the message that the people you are with are not as important or interesting as the phone.’

Maybe we should all take a leaf from Anna’s book and leave our phones at home from time to time.

Who knows, we might even make a new friend who’s not called Siri.