Every weekday, Daniel Verrocchi rides his bike to work – a restaurant in Ivanhoe called Floyd – where he is known by the regulars as one of the best baristas in the suburbs. For months now, while perfecting countless skinny lattes, cappuccinos and espressos, ‘The Verox’ has been talking and dreaming of his upcoming trip to South Africa, where he will witness the 2010 FIFA World Cup. 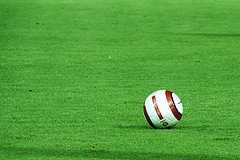 In less than two weeks, Daniel and thousands of eager soccer fans from all over the globe will unite in South Africa to see their respective countries compete for the most sought after prize in world sport. The FIFA World Cup is the most widely viewed sporting event in the world with an estimated 715.1 million people tuning in to watch the final of the 2006 World Cup, held in Germany.

After witnessing the breathtaking atmosphere of the 2006 World Cup first hand, Daniel could not pass up the opportunity to experience that again. ‘There is no greater or more patriotic feeling than standing up before the game and listening to the Australian national anthem being played. It makes you feel so proud, so emotional, part of something special and something that you will cherish for the rest of your life,’ he said.

Like many other Australians, Daniel became involved in soccer as a young child. He has played the game for years and recalls the days when he and his grandfather would sit and watch their favourite players, such as Gianluca Vialli (Juventus FC and Chelsea FC) on television.

For supporters like Daniel, soccer takes up a lot of time and dedication for the love of the game. ‘I follow Chelsea in the EPL (English Premier League) and Australia. Melbourne Victory is my A league team, and I also have strong links to Juventus FC because of my Italian background.’

When asked about his love for soccer, Daniel agreed that he is quite fanatical about the game. ‘I watch football every weekend… most of the time I read stories on Soccernet and other football related websites on a daily basis,’ he said.

Saving for the trip was not even an issue for Daniel, who said that ‘some things are worth a lot more than money… some experiences are priceless!’

Marc Jones is another die-hard devotee of the world game. He has recently moved here from London and is a passionate Manchester United supporter. A weekly ritual for Marc back home included putting on his United jersey and scarf before heading to the game with mates, or to the local pub. ‘There is no real experience like attending a live EPL match. It is not just watching 90 minutes of soccer, but the overall experience of getting to the stadium, walking to the gates with all the other fans singing and chanting and of course eating a meat pie at half time,’ he said.

But why is it the world game? What is it about soccer, the seemingly simple idea of kicking a round ball into a net, that so many people incorporate it into their everyday lives?

One of the principal attractions of soccer is the way the game brings people together. Enthusiasts from many different backgrounds and nationalities follow their team, and there is a real sense of community and equality amongst fans.

‘The strength of the sport is it doesn’t change in the way it is played from juniors to men, or women to men, or girls to boys. It’s a universal sport that can be played by all people in all countries,’ said Murray Ovens, director of football and senior men’s coach at the Eltham Redbacks Football Club.

Murray started playing soccer as a small child of just six, and since then has been in and around the game for years. As a player and a coach, he has witnessed the game grow enormously, particularly over the past decade. ‘Football in Australia can now employ men as full-time sportsmen, whereas before players were only able to be part-time footballers and had to supplement their income via some other occupation,’ he said.

Murray believes the game’s infrastructure has grown and now commands more media attention. The increased exposure means an ability to attract more sponsorship dollars. Venues such as AAMI Park in Melbourne have been constructed for the rising supporter base and popularity of Australia’s premier domestic soccer competition, the Hyundai A-League.

The A-League was founded in 2004 and provides young Australian players with a platform to develop their skills and prepare themselves for the world competitions. The league is currently marketing and promoting their competition around the idea that soccer is the one and only ‘world game’.

With such a competition, and the Socceroos qualifying for a second consecutive World Cup, Murray says the potential is there for soccer to become the elite sporting code in Australia.

‘As a professional in this country, you are now able to earn a good living from playing football and also represent your country in the same sport, whereas AFL and NRL can’t offer that… the challenge is that there are so many other sports to compete with. That’s the challenge for Australian sport, that we don’t have the population base to be able to support all of those sports for the time being,’ he said.

Murray has also seen soccer grow hugely in the country as a participant sport. ‘Australia is now able to support and fund better structured and organized competition, and elite competition where children show promise and have the opportunity to train at a semi-professional level under well-trained structured football programs run by the governing bodies, the FFA (Football Federation Australia) and the FFV (Football Federation Victoria)’, he said. ‘This gives them the chance to perhaps even work towards becoming a professional player themselves’.

With soccer in Australia still emerging, Daniel Verrocchi believes that the success of the world game in Australia will depend greatly on Australia’s success at the World Cup. ‘The more successful Australia becomes as an international football nation, the more the sport will grow,’ he said.

Four years ago, Australia was the last country to qualify for the World Cup, but now, after the Socceroos have proven they can compete on the world scale, the expectations are much higher.

The players’ intensive training has begun, and fans await what could possibly be the Socceroos’ most successful attempt at holding the glorified World Cup.

Daniel Verrocchi and thousands of Australian fans will be there, chanting ‘oi oi oi’ with the Australian cheer squad and soaking up that buzz that is soccer – one of the world’s universal sporting languages and, without a doubt, the world game.