The Sci-Fi storytelling device that may be the economic future of space commerce. 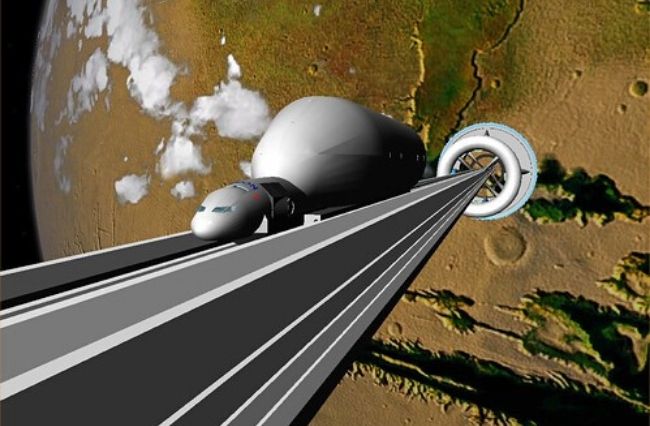 On 12 April 1961, Russian cosmonaut Yuri Gagarin was the first man in space. On 20 July 1969, Neil Armstrong took “one small step for man” on the surface of the Moon. More than half a century later, a lot of progress has been made in the space industry, and one particular project, a space elevator, could be the next “giant leap for mankind”.

While it sounds straight out of science-fiction (and it is), a program funded by the NASA Institute for Advanced Concepts (NIAC) have described a complete space elevator that can be constructed, deployed and operated using “current or near-term technology”.

The idea is to build a 100,000km long cable – around a quarter way to the Moon – attached to a space anchor that would transport a cable car from an Earth-based spaceport, carrying people and equipment, to a space station in geosynchronous orbit positioned roughly 36,000km above.

Establishing a space elevator could make rockets designed to escape Earth’s orbit completely obsolete. Since there would be an easier and permanent way to get payloads of passengers, cargo and equipment into space and back down, the revenue available from its carrying capacity would remove the economic obstacle of the cost of sending rockets into space.

Earth observation and scientific space missions would be expandable in number and capability too.

Currently, commercial space business is only profitable in the case of communications. But with lower access cost to space, many other types of commerce, like asteroid mining would be cost-effective. Some 5km wide near-Earth asteroids are estimated to hold hundreds of thousands of tonnes of precious mineral resources, such as gold and platinum, and holds the potential to move the mining industry into space.

Plus getting to Mars would be way easier, and human and robotic exploration, as well as colonisation, would be possible at a much lower cost.

The NIAC program head, Doctor Bradley C. Edwards, concluded that a space elevator would reduce operating costs to around US$250 per kg with a payload of 1000 tons per year, making mining asteroids particularly lucrative and overcoming economic obstacles.

Doctor Brad Tucker, astrophysicist at the Australian National University, explains rocket technology is too expensive to make commercial space operations possible, even with SpaceX’s advancements in this field.

“Right now, the rockets are too inefficient, it takes a lot of fuel to get where you need to go and to bring it back down,” he told upstart.

“People are working on solutions to this, but then there’s also the issue [that] it’s costly to extract [minerals from asteroids]. It’s just costly to do everything right now in space.”

But private organisations like asteroid mining company Planetary Resources and satellite communications company OneWeb, were still hell-bent on taking business to the stars. Even so, there have been some setbacks, and the profitability of successful asteroid mining is economically questionable.

Planetary Resources was acquired by ConsenSys, a blockchain technology company, on 31 October 2018, before their first asteroid prospecting mission could be launched. And OneWeb, which was attempting to bring global internet via satellite, announced bankruptcy on 27 March 2020, even after 74 successful satellite launches.

Money is the biggest issue commercial space enterprises are facing, and both companies were unable to secure enough funding to continue operations. Dr Tucker says it’s unlikely a private company could succeed in building a space elevator without the backing of an entity with the overhead only a government agency can provide.

“You’re talking billions upon billions of dollars, so you have to have someone who is essentially a government partially invested in it,” he said.

“If the government is providing infrastructure in the long term, well they will play the long-term game. [Governments] don’t worry necessarily about short-term profits, but ultimately want the long-term win.”

A balance between private enterprise and government could provide the backing and security which Dr Tucker says would result in an end-user committed to seeing space commerce ride the elevator to orbit.

“We can’t say that it can’t happen soon because now, in lots of different cases, private corporations are working together with the Government,” he said. “I think that does give promise that things like [the space elevator] can work in the future if that right relationship from the beginning essentially happens.”

Based on current commercial prices of single-walled carbon nanotubes Professor Khlobystov estimates a cable with a diameter of  5cm and length of 96,000km, would cost about $300 billion, but says the costs will go down substantially as the scale of nanotube production goes up.

“Carbon is the most sustainable chemical element, there is no shortage of carbon on our planet. This is a big advantage of carbon nanomaterials over other materials,” he said.

However, research into CNTs’ mechanical performance found that a single atom out of place can severely compromise the strength of CNTs, among other problems. But Dr Tucker says the biggest principle is that nothing is impossible and “once money makes it possible, it’s done”.

“Someone will find a way. There are lots of people interested in these things, the money is being made out,” he said.

“The realisation is that these things are possible, and it really is this kind of an interesting mix between private and government agencies because they have their own goals and then it’s finding that right balance.”

Article: Gianni Francis is a second-year Bachelor of Media and Communications student majoring in journalism at La Trobe University. You can follow him on Twitter @giannifrancis6

Image: Space Elevator on Green Mars By: FlyingSinger, this image is used under a CC BY-NC-SA 2.0 license and is available HERE, the image has been resized.