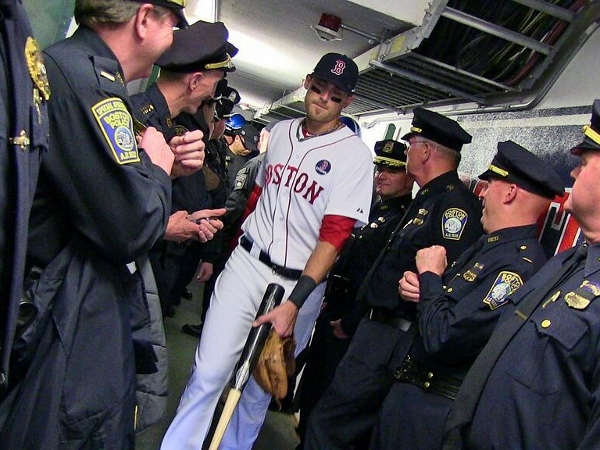 Mic up, thousands of eyes fixed on him, the words funnelled out of Rene Rancourt as he performed the ritual he had done so many times before.

About 20 seconds later, the soloist singer went silent and allowed the full TD Gardens crowd to sing the rest of the Star Spangled Banner, as he motioned the beat with his right hand.

It was a powerful moment during a tough week for Boston.

After the game, Bruins star forward Patrice Bergeron described the moment to the Toronto Star as a special moment for the suddenly taut city of Boston, “The city’s a winner, for sure. It was something very special to be a part of. It’s one of those games you really wanted to get — not only for the team, but for the city.”

Ryan Miller, who started in goal for the visiting Buffalo Sabres and was the starting goalkeeper at the 2010 Olympics for the United States National Ice Hockey Team, called the moment big for Boston but the country as a whole.

The game – held on Wednesday, was the first major sporting event since the marathon bombing on Monday.

The atmosphere at the game on Wednesday had been concentrated: military personnel on hand with assault rifles, metal-detecting wands and random car inspections.

The emotional pre-game ceremony began with a video tribute to the marathon, and soon followed the aforementioned rousing national anthem. Even if you were not in that arena, or from the United States, a hair on your neck stood as you watched the scene unfold and the citizens of Boston get right back up, after hitting the ground so hard.

The inspirational scene, rousing with national spirit and pride, had been reminiscent of the American scene seen many times in prior years.

It does not take many clicks of the mouse on YouTube or the internet to find highlights of the New York Yankees stirring run to the World Series, post September 11.

The Yankees, the often abhorred team in Major League Baseball, suddenly became the proverbial sweethearts and a symbol of American resilience.

The Yankees first game following the attacks on September 18 against the Chicago White Sox also featured an emotional ceremony that acknowledged the tragic events that had only taken place seven days prior – a controversial decision that many felt it had been too soon to play sports.

In what is usually hostile territory, the Yankees lined up along the foul lines were cheered.

Despite contested opinions, George Bush’s Game Three Pitch was a moment of reparation for the scarred American psyche.

In any other year, the Diamondbacks would have been the cinderellas and America’s darling. But in 2001, as they claimed the World Series from the Yankees, they were viewed as the spoilers of the party, the disliked ones — a position the Yankees had usually been in themselves.

Over the past week in Boston, it has been interesting to observe the role that sports played.

It served as a temporary relief for grievance anxiety, fear and the unknown; as evidenced by the Yankees who lifted the American nation and distracted them from the horrific stumble they endured two months prior.

As the saying goes, “sports do not build character, they reveal it.”

In this instance, it not only revealed, but also nurtured the strength of an entire city.

Mark Gorokhovski is studying on exchange at La Trobe University from Carleton University. You can follow him on Twitter: @MarkGorokhovski