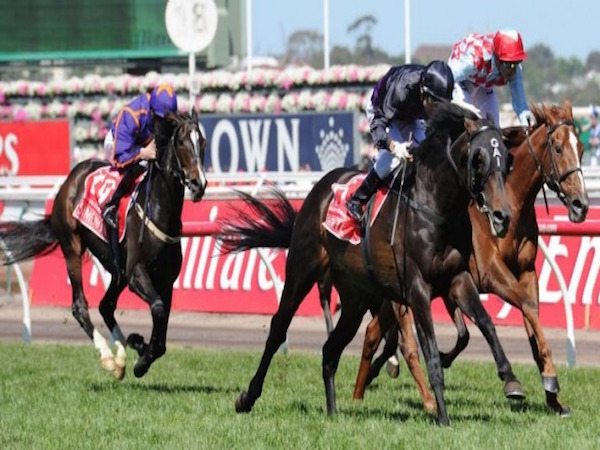 As the business end of the racing calendar approaches, it’s time to whip out the fascinators and form guide.

The spring racing season is not just for racing purists, but also any once-a-year punters.

In part one of upstart‘s Spring Racing Carnival guide, we’ve examined five horses from abroad who are expected to make an impact.

This powerful six-year-old is arguably the best horse coming to Australia this year, and possibly the best ever. The Japanese raider has so far won $2,789,484 in prize money, and looks poised to make a big play at the Caulfield and Melbourne Cups. Fame Game was unlucky not to win the 3200m Tenno Sho, one of the biggest races in the world, after weaving through early in the straight before motoring home down the outside, only to finish a head behind Gold Ship.

He is a genuine staying superstar who has won up to 3400m, and boasts an electrifying turn-of-foot.

You can see his run in the Tenno Sho here.

Now eight-years-old, Hokko Brave will also make the journey down from Japan after running in the Tenno Sho. He finished sixth in the race, but was only 1.8 lengths from the winner. Racing in limited room to the turn, Hokko Brave worked well towards the line and showed that he can run-out a strong three kilometres at the top level of world racing.

Craig Williams has recently been booked to ride Hokko Brave in both the Caulfield and Melbourne Cups, which should give punters plenty of confidence in the horse.

Trained by Peter Chapple-Hyam in England, this five-year-old stallion is a lightly-raced middle-distance galloper with potential to be a big star. Arod was last seen in the Sussex Stakes, finishing just half a length away from unbeaten superstar, Solow, despite carrying 61kg on his back.

He is one of few international runners officially invited by the Moonee Valley Racing Club to the Cox Plate, and all suggestions are that he will be here and ready to run a very bold, front-running race.

You can see his run in the Sussex Stakes here.

Highland Reel enters one of the major Spring Racing Carnival targets with a winning formula. Trained by champion trainer, Aidan O’Brien, this four-year-old Irish horse has already turned heads across the world in just nine races. After racing well in Europe, Highland Reel followed the path of his ex-stablemate, Adelaide, and travelled to the U.S. to compete in the Secretariat Stakes.

Adelaide, the eventual dynamic winner of last year’s Cox Plate, won the American race before travelling down to Melbourne. Highland Reel managed to repeat history this year with a blistering performance in the Secretariat Stakes. He will enter the Cox Plate this year with the same path, same form, same trainer and same weight as Adelaide, so it definitely isn’t hard to make a case for this speedy galloper.

If you don’t know who Red Cadeaux is, then you’ve probably missed the last decade of racing. The nine-year-old veteran has amassed $8,108,268 in prize money, perching him on top of the ladder for prize money earned by a British galloper.

In recent years, Red Cadeaux has stolen our hearts, and seems to reserve his best racing for Australia. After being the runner-up in an unbelievable three Melbourne Cups, he travelled down for a short stint in autumn, resulting in a brilliant second place in the Queen Elizabeth over the unsuitable 2000m journey.

He will have every punter on his side this spring and might eventually shake the ‘bridesmaid’ tag to clinch that very elusive Cup.

You can see his very first Melbourne Cup here, where he lost by the shortest margin in history.

This is part one of two-part preview. The next preview will focus on five Australian horses to watch out for.