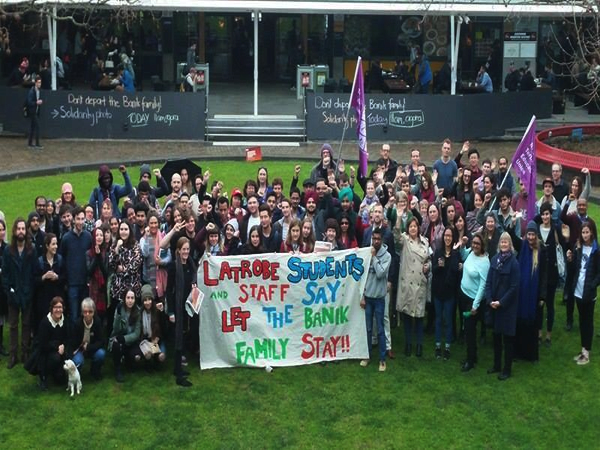 Supporters rallied at La Trobe University on Wednesday morning to express solidarity for the Banik family, who have been forced to deport.

Around 100 supporters joined and raised a fist in solidarity for a photo with Sarmin Sayeed, organised by La Trobe University’s Student Union.

The family submitted an application for permanent residency in December 2014, however they found out in July 2015 that the immigration tribunal rejected them because their son, who suffers mild autism, is considered a ‘burden’ for the Australian health system, which would need to support him.

Sayeed says she has been contesting the decision ever since.

“My supervisors are trying to keep me up for the whole time because this has been going on for almost one and a half years,” she tells upstart.

“La Trobe has been supportive from the very beginning,” she says.

Rally at La Trobe University this morning in support of student Sarmin Sayeed and her family pic.twitter.com/UZiD45fZjV

Sayeed works as a general practitioner and completed her PhD with La Trobe University.

Her husband, Biswajit Banik, is a medical academic at Monash University, which also held a similar campaign in July. RMIT had also shown support.

“We don’t know what will compel Mr. Dutton to intervene our case but we have been trying top stay positive and keep trying whatever we are doing,” Sayeed says.

“We are trying to get as much support as we can. So that hopefully Mr. Dutton at some point feel[s] some compassion to intervene the decision.”

Sayeed says as soon as her employers found out about her circumstance they contacted La Trobe’s Vice Chancellor, John Dewar, who has since written a letter appealing the decision to Mr. Dutton.

In July her employers, Health Watch Australia Pty Ltd initiated a change.org petition, which was also directed at Mr. Dutton.

Two weeks ago the petition numbers were around 6,000. Currently it stands at 37, 000 supporters.

In 2013 Enamul Kabir, a statistician and his wife Siuly Kabir, a biomedical engineering researcher, requested permanent residency but were rejected because their son suffered mild autism.

The Kabir’s appealed to then Immigration Minister Scott Morrison and launched a change.org petition which attracted just shy of 70,000 supporters.

As a result of their efforts Mr Morrison intervened and the Kabirs were granted permanent residency.

Sarmin says she strongly believes the law needs to be changed after what her family and families before her have experienced.

“I think something should be changed with this law because we work here,” she says.

“We don’t want to go to the public place and say ‘look I have this issue can you please support me?’ It’s been very hard to open up your whole life in front of everybody.”

In an interview with SBS, Banik said the ordeal had been very stressful.

“It’s just shattered our life and … I lose my dignity as a father that I couldn’t support my son when he needed me the most,” he said.

For Sayeed, the tribunal’s perception that her son is a burden isn’t right.

“It was very hard because im a doctor myself, I treat thousands of people. Lots of them have different kinds of disabilities,” she says.

“And when it comes to my son he has been labeled as having a disability and it is the reason for not having a permanent residency.

“It’s been very hard for us to get used to my son as a burden. He’s not a burden on anyone.”