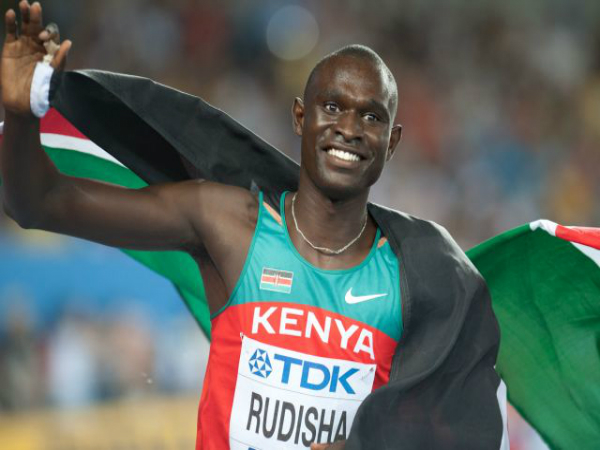 The fastest man ever over 800m and London Olympic gold medallist, David Rudisha, is confirmed to start his 2015 campaign in Australia. It’s an appearance that has Australian athletics fans buzzing with anticipation.

In what was a huge coup for Athletics Australia, Rudisha will race in Melbourne on Saturday night at the IAAF World Challenge following his performance at the Sydney Track Classic a week earlier.

Rudisha is set to race the 800m against Australia’s best as the Australian Athletics Tour wraps up after two months of sensational competition across the country.

One local competitor who could challenge Rudisha is Victoria’s Alex Rowe. Rowe made headlines last July after equaling the long-standing 800m Australian record set by Ralph Doubell during his gold medal-winning performance at the 1968 Mexico City Olympics.

Rowe has been in impressive form recently. He ran a World Championships qualifying time of 1:45.38 in Canberra earlier this year and comes into Melbourne at his peak fitness.

It’s expected that the inclusion of Rudisha will push Rowe even closer to surpassing the time of 1:44.40, but the 22-year-old will have some considerable ground to cover if he wishes to match the Kenyan. Rudisha’s best time, the world record he set in London in 2012, stands at 1:40.91.

Speaking to athletes and coaches at Melbourne University on Wednesday night, Rudisha was thankful for the opportunity to travel to Australia to start his competitive season.

“I really like running in Australia, everyone is welcoming, and hopefully this will be the beginning of a good year for me,” he said.

But Rudisha won’t be the only Olympic gold medalist on Saturday night, with Australia’s ‘golden girl’ of track, Sally Pearson, contesting the 100m hurdles.

Pearson will enter the race as clear favorite, having not lost in her preferred event in Australia since 2005. Pearson, who opened her season with a 12.74 run at the Queensland Track Classic, will also be looking for some form before she heads to Beijing for the World Championships in August later this year. Lining up against her will be Youth Olympic Games medalist, Michelle Jenneke, from New South Wales.

But of course the focus won’t just be on the track.

Australia’s very own Kim Mickle will be competing in the women’s javelin, the event which saw her claim gold at the recent Glasgow Commonwealth Games.

Mickle’s throw at last year’s IAAF Melbourne World Challenge saw her break the Australian record and reach an incredible 66.83m. Her lead up to Saturday’s meet hasn’t been ideal, however, with the reigning national champion recently returning from an injury break due to an achilles problem. Yet it seems she is not out of touch, posting an IAAF World Championship qualifying throw of 63.87m one month ago in Perth.

But by no means will this be an easy victory for Mickle. She will have to face Glasgow 2014 bronze medallist Kelsey-Lee Roberts, South African Commonwealth Games silver medal winner Sunette Viljoen, and Asian Athletics Championship medallists from China, Li Zhang and Lingwei Li.

Minds will be thrown back a few years as Tasmyn Manou-Lewis makes her triumphant return to the Australian athletics scene. Manou-Lewis, now 37, will race in a competitive women’s 400m that will also include national champion Morgan Mitchell, as well as Glasgow 2014 semi-finalist Caitlin Sargent.

Nina Kennedy, who will compete in the women’s pole vault event, is a rising star to watch. Kennedy excited the athletics world last month after the 17-year-old jumped 4.59m and broke the under-20 world record at Perth’s Jandakot City Track Classic.

Kennedy, coached by the legendary Alex Parnov, had already qualified for the World Championships as she surpassed Sweden’s Angelica Bengtsson’s previous world record of 4.58m on her third and last attempt.

The Melbourne IAAF World Challenge will give sports fans the chance to see some of the world’s best athletes in action. Regardless of knowledge of the athletes or the sport, Melburnians will be treated to a celebration of athletics, and inspiring performances are almost certain to take place.

The full entry lists, schedule and additional information are available from Athletics Australia.

Jake Stevens is a third-year Bachelor of Journalism (Sport) student at La Trobe University with a passion for infographics. You can follow him on Twitter: @CobbaStevens.