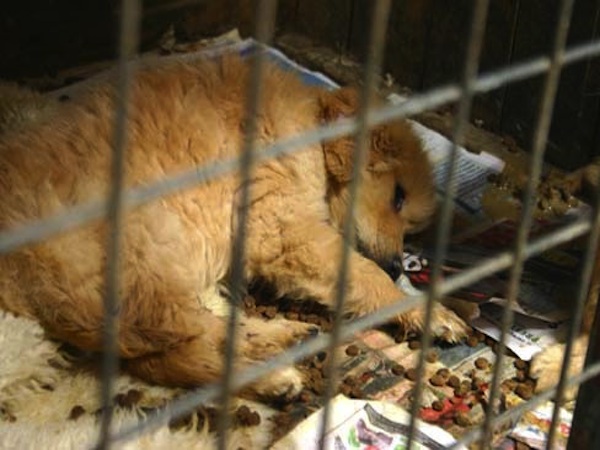 About two months ago my family and I decided that we wanted to find a playmate for our 11-year-old Labrador, so we went to the RSPCA where, to our horror, we received an unexpected insight into true nature of the puppy farming industry.

Just about every dog available for re-homing had been rescued from mass breeding facilities and nothing could have prepared us for the gut wrenching sight of “man’s best friend” cowering and whimpering at the sight of a human being.

This is a sad reality across Australia with thousands of puppy farms operating as supply chains for the pet shop industry. Using cruel, indiscriminate breeding practices in the pursuit of profit, dogs are confined to filthy cages with little or no access to veterinary care or opportunities for exercise and socialisation.

Thanks to organisations such as the RSPCA and Oscar’s Law who have long fought for better protection for breeding dogs, in Victoria the puppy farming industry has taken a significant hit with pet shop sales down 25 per cent.

However, the state’s flawed Domestic Animals legislation has consistently undermined the efforts of these organisations to stamp out the puppy farming trade.

Part 4 of the Domestic Animals Act (DAA) makes it an offence for puppy farms to operate unregistered, whilst also bestowing power upon local councils to ensure the businesses comply with a state wide Code of Practice.

However, the founder of Oscar’s Law, Debra Tranter, has told upstart that the regulations are problematic because they still allow many cases of cruelty to slip through the cracks.

“The code may have gone from a five page document to seventy pages, but it has changed little in terms of the protection it offers to animals,” she says.

“We reported a puppy farm operating without a permit last month, but under the rules we can’t actually shut them down because they need to be given the opportunity to apply for a permit and become legal.”

The underlying problem stems from the structure of the code of practice. Although the DAA legislation provides local councils with broad powers to ensure compliance with the code, enforcement is largely discretionary thanks to haphazard drafting of the code’s provisions.

Words such as “should” are often used instead of more authoritative terms such as “must”, which encourages the perception that the code is more akin to best practice guidelines as opposed to binding rules.

To make matters worse, the loophole was widened in April this year when the state government amended the code to allow for a change in vet checks and the limit on the amount of litters breeding dogs may rear in their lifetime.

These changes came despite a three year government review of the regulations that included over 30 000 public submissions.

Ms Tranter believes these changes are indicative of state government rubber-stamping of the puppy farm trade.

“It’s basically a free pass for cruelty,” she says. “I

t’s pretty disgusting that our premier, a vet himself, would ignore a three year review and thousands of submissions in favour of the commercial interests of a handful of puppy farmers.”

The RSPCA agrees, with the organisation’s chief executive Maria Mercurio telling the ABC in April that the amended code now defeats its own purpose.

“To take away the limit on the number of litters a breeding bitch can have just undermines the whole intent of the code,” she said.

“To say that the safeguard is to have a vet check is just ridiculous, it’s laughable.”

The state government has consistently maintained that it has not watered down the animal welfare regulations, however the difficulties associated with ensuring regular compliance it is difficult to disagree that looser laws are of no benefit when it comes to eradicating cruelty in puppy mills.

Ms Tranter says this is because organisations such as the RSPCA and Oscar’s Law are often strained of resources to monitor cases of animal cruelty.

“Even if we had the best laws to protect these animals, we just don’t have the resources,” she says.

“There’s just not enough man power to get out there to check on these puppies which means many of these farms will just self regulate.”

Currently the RSPCA has a pool of just 19 inspectors covering the entire state of Victoria. Although nearly 10 000 cases of animal cruelty were investigated last year, it still costs the not-for-profit organisation $3 million to maintain it’s inspection program.

Adding to this are legal costs for prosecuting offenders and expenses for long term boarding and veterinary care for rescued dogs, all of which must be maintained with miniscule government funding.

Despite a pledge from opposition leader Daniel Andrews to increase funding for RSPCA inspectors, Ms Tranter remains convinced that little is going to be done to tighten the rules for puppy farmers and that it is now up to consumers to force them out of business.

“If the state won’t stand up for these dogs, people can,” she says.

“It’s a consumer driven industry, so don’t reward a cruel trade – choose rescue dogs or go through registered breeders and take the market away from them.”