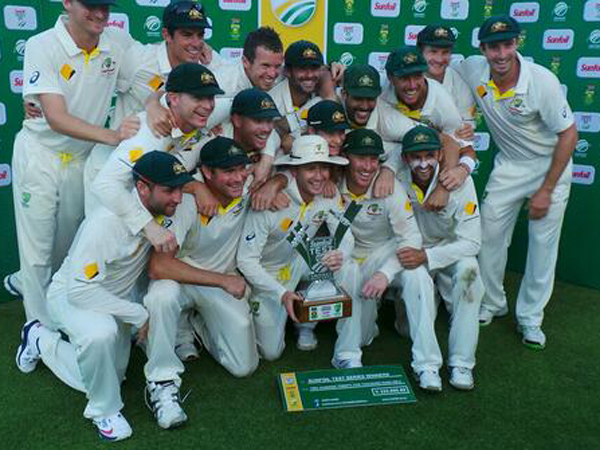 Following Australia’s most recent heart-stopping victory over South Africa in Cape Town, the summer Tests have concluded, albeit in March.

One of Australia’s all-time great summers of cricket was one that four months ago seemed impossible. Directed by Michael Clarke, a team of apparent misfits played cricket that seemed beyond their abilities after the disastrous tour of England. Amazingly, that was less than 12 months prior to this week’s series win over South Africa. Couple the astonishing turnaround with a chemistry that evolved the team into a steadfast unit, and the Australians played with unprecedented success.

Even on that last evening at Newlands, with time working against his team and overs quickly running out, Clarke launched one more assault on the opposition. One more spell of short bowling, one more push to show the world that the team he leads means serious business.

Australian won, and it was only fitting that they did.

Aside from the second Test against South Africa in Port Elizabeth, there has been an odd air of inevitability about Australia’s summertime dominance. Wickets seemed certain to fall whenever Mitchell Johnson bowled, while David Warner became more and more dangerous with the bat. It was not supposed to be this way in November, pre-Ashes.

Hindsight is a virtue, but when the squad for the first Ashes Test was announced, Twitter collectively sighed with anguish at the inclusion of Johnson – another chance for a seemingly wasted talent. Warner was still there, but despite promising performances, the public still saw him a player with more ego than ability. Brad Haddin was ageing, Steve Smith was raw, Chris Rogers was a fill-in, Ryan Harris was a one small injury away from retirement and Nathan Lyon was the best of a poor bunch.

When Stuart Broad ripped through the Australians on day one in Brisbane, the Ashes felt further away than ever.

But victory in the first Test at the Gabba was significant. And when Johnson went through England at the Adelaide Oval the series was suddenly over. The sheer desire, intimidation and skill of Australia had ripped England apart. Just as Shane Warne so easily spun England’s batsmen out at the same venue in 2006, Johnson had finished off the enemy with mental and physical aplomb.

Every player had a moment (even George Bailey) and Australia looked untouchable. The side wasn’t complete, but it was enough. A series white-wash against England instilled confidence, but South Africa would not be so compliant. England had folded. Their team was in disarray and players were dropping like flies. The world’s best team wouldn’t be like this, surely.

Australia then waltzed into South Africa and defeated the best team in the world, dominating them in two of the three matches. The Australians claimed more victims along the way as the series previous did, with Jacques Kallis getting out of the way of the oncoming train before it got to the station – and South African captain Graeme Smith getting off at the final stop.

Aside from the ever-classy and robust efforts AB de Villiers, Australia was on top for the majority of the series.

Australia’s dominant summer was exemplified by arguably two of the most divisive figures in the side prior to the summer becoming national heroes. Johnson went from wasted talent to being labelled a once-in-a-generation bowler that Dennis Lillee famously talked about, while Warner who talked-the-talk, backed it up and showed not only the Australian public, but the entire cricketing world, he can walk-the-walk.

But, perhaps nobody has typified this summer quite like Ryan Harris. Reflecting the team as a whole, Harris wasn’t expected to string together multiple games, let alone of quality. Instead of being one delivery away from injury, during the summer Harris increasingly became one delivery away from glory. In the final Test against South Africa, it was fitting that Harris was the bowler who lifted a gear when his team needed it, and possibly for the final time.

Harris’ unbelievable final over has become a moment that will be remembered. Bowling through visible pain and playing a major role in a remarkable victory will become a trademark of Harris’ should he choose to end his short and injury-interrupted career.

And he might just do that. Having elected to undergo surgery on his knee, the veteran quick will be 35 years of age by the time the Australian summer comes around again.

Harris delayed the surgery on his knee to participate in these last few months. Now, having won the Ashes and helping Australia knock the number one team off its perch, he might decide against ‘going around’ again.

But it wouldn’t be the first time the cricketing public has written-off the bowler. With sustained success looming, he may just be inclined to give Test cricket another crack. And with the team heading the way it is, who wouldn’t want to be a part of that?

Josh Barnes is a second-year Bachelor of Journalism (Sport) student at La Trobe University. You can follow him on Twitter: @barnseyy.