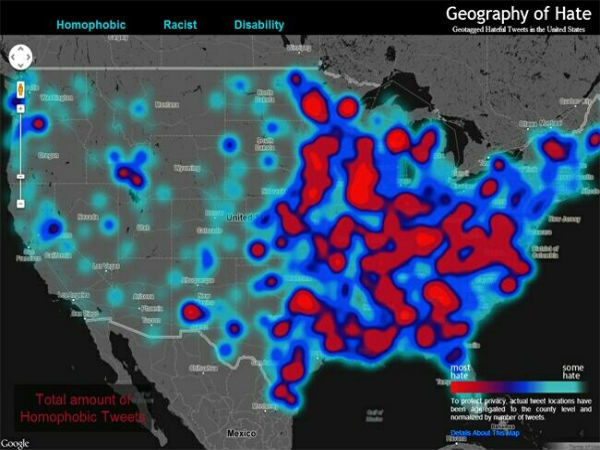 A study conducted by researchers at Humboldt State University has shown which areas of the United States make the most racist, homophobic and anti-disability remarks on Twitter.

By collecting and manually sifting through every geocoded tweet made in the United States from June 2012 to April 2013 containing these ‘hate words’, researchers were able to find and map out 150,000 cases where these terms had been tweeted.

The result was a map, the Geography of Hate, which showed the majority of these tweets to have originating from the east of the country.

According to Floating Sheep, only 1.5 per cent of tweets are geocoded, yet the tally still managed to reach 150,000, illustrating how ingrained this kind of language is within society.

This is the “Geography of Hate” map created by CSU Humboldt students based on hateful tweets. Look at Placer County. twitter.com/rolandodiaz16/…

Another study conducted by Mark Hatzenbuehler in April 2011, which investigated the link between social environments and LGTB suicide attempts, found that LGBT teenagers are five times more likely to attempt suicide than heterosexuals (21 per cent versus 4.2 per cent). The study also found that LGBT teenagers are 20 per cent more likely to attempt suicide if their social environment is unwelcoming.

This becomes concerning when considering the Twitter counter shown below. Created by ThinkB4YouSpeak, a campaign that raises awareness about prevalence and consequences of homophobic language, this live counter shows how many times ‘gay’, ‘dyke’ and ‘so gay’ are used on a day-to-day basis. Considering the numbers below, it looks like the campaign organisers have a long way to go before they can reach their goal of zero.

But, sticks and stones, right?

According to the Government Funded LGBTI Health Alliance, 38 per cent of same-sex attracted females and 44 per cent of males aged between 22 and 27 have experienced depression in their lifetime as a result of psychosocial stress.

This problem was recognised by the Gillard government in 2011, when $1.1 million was allocated to LGBTI  suicide prevention.

Minister for Mental Health and Aging, the Hon Mark Butler spoke of the higher levels of depression, anxiety and other mental health problems that can result from prevalent homophobia in society.

“The medical and scientific evidence concerning increased suicide by queer people is clear.

“Evidence suggesting they are 3.5 to 14 times more likely to attempt suicide than the general community,” he says.

Business Development Manager for It Gets Better Australia, Jacob Thomas expresses a similar urgency for change in social stigma.

“Recent studies in the past two decades have shown us consistently that where the perceived environment around a DSG [diverse sexualities and genders] identifying person seems unwelcoming that they are less likely to openly express their alternate sexuality,” Thomas says.

“My ‘coming out’ was delayed by a number of years. I felt terribly uncomfortable to even consider that I was anything other than ‘normal’ and this sparked a reluctance in me letting myself be a free agent at an earlier age,” he adds.

Thomas elaborated on how dangerous these words can be, stressing the way in which this language can impact upon a person’s future, if they are to have a future at all.

“This incorrect use of their [LGBT] identity can promote feelings of confusion and have them question whether they and similar individuals are accepted and respected.

“The consequences of these actions can result in anything from isolation and low self-esteem, to non-suicidal self-infliction (NSSI) or even suicide.

“It is important to recognise the impact that these seemingly small remarks can make on a person in this circumstance,” he says.

Let me put it this way, would you find it socially acceptable if you heard someone negatively say ‘that’s so black’ or ‘that’s so Asian’? Because that’s what people are essentially doing when they say ‘that’s so gay’ – they’re pinpointing a certain minority and equating them with something awful.

I’m not personally offended because you coughed “fag” at me as I walked past or because you called your homework “gay”. What offends me is the arrogance of anyone who believes that they are able to use either of those words in either context without comprehending the idea that it could having a destructive effect.

So next time the bus drives off without you or there’s a particularly long line at your favourite coffee shop, expand your mind and maybe think of another word with which to describe your disdain. Just think before you speak.

On that note, I leave you with a question from Thomas.

“Why use ‘gay’ to articulate your frustration when language is filled with thousands of words to express you and your state of being?”