Students rally one year after the release of the Australian Human Rights Commission sexual violence survey. 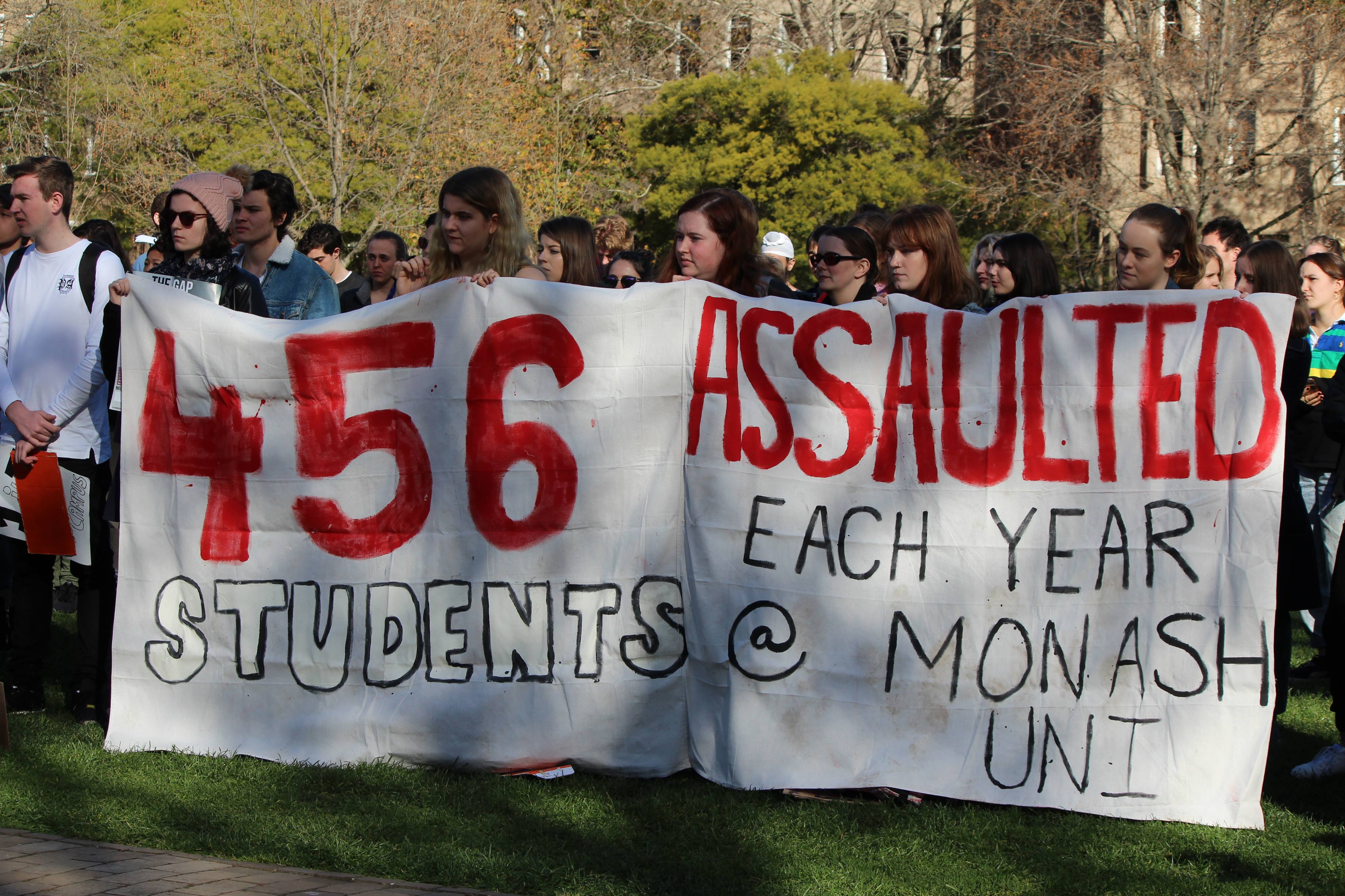 “In a society where we continue to have pervasive victim blaming attitudes, it is still a radical act to actually believe someone when they tell you that they have been sexually assaulted.”

These are the words of journalist and End Rape on Campus ambassador Nina Funnell.

Last week, students across Australia rallied at university campuses in a National Day of Action to acknowledge survivors of sexual violence.

These students came together to put pressure on how universities address sexual harassment and assault on campus, one year after the ‘Change the Course’ report was released.

Victorian students gathered at the University of Melbourne to present ten demands to the university.

These demands focused on funding and support for sexual violence services, education and training for staff and students, and requested an “annual release of all data that pertains to sexual violence on campus”.

The students also presented university management with a banner covered in handwritten personal stories of sexual violence on campus.

Funnell says that public events such as rallies not only raise awareness, but they help survivors of sexual violence heal.

“There would’ve been a lot of people who turned up to the event yesterday who were themselves survivors, and I think for them, having the public spaces to come together and acknowledge past and current wrongs is beneficial not just in terms of catharsis but in terms of solidarity,” she told upstart.

“It also goes for others who might be witnessing and not be aware of this issue on campus. It might put something on their radar that hasn’t previously been there before.”

But rallies aren’t the only platforms for speaking out against sexual violence.

According to Funnell, writing letters and discussing these issues with friends can also help to defeat the stigma surrounding sexual violence.

“That everyday localised activism…that’s where cultural change will come from,” she said.

Released by the Australian Human Rights Commission, ‘Change the Course’ detailed the prevalence of sexual harassment and assault on university campuses.

It surveyed more than 30,000 students from 39 Australian universities.

The survey found La Trobe University to be the worst campus in Victoria for sexual harassment, where 30 percent of students reported being sexually harassed at university in 2016.

Deakin University ranked highest in Victoria for sexual assault, where 2.3 percent of students reported being sexually assaulted at university.

“As a woman it is so terrifying knowing that your school ranked the worst campus in Victoria for sexual [harassment] and you don’t know that when you apply,” she said.

Funnell says she was disappointed with the way the initial report had presented the data.

On the anniversary of the report, the Australian Human Rights Commission released an updated audit of universities.

The audit states that “universities have made significant progress towards implementation of the recommendations since the last audit was conducted in December 2017.”

One such implementation was the University of Sydney’s new portal for reporting sexual violence, which was launched last week.

The portal was criticised by students for being “unethical and irresponsible” and has already proven to be faulty.

Various other Australian universities have been criticised for their responses to the recommendations since the initial report was released.

Monash University student Despina Skourlis says that while her university has taken some action, it is still not enough.

“We have the Respect Now taskforce but there should be so much more. There should be everything demanded at the NDA as the bare minimum,” she said.

“University is supposed to be a place where you go to learn not somewhere you go and you’re scared of what might happen to you.”

Nina Funnell, who wrote a report on sexual violence and hazing in residential colleges, says that universities need to focus on teaching students how to recognise harmful situations.

“You can’t just give people bystander skills if you don’t also teach them when those skills are needed,” she said.

“Universities need to actively educate students on consent, and take swift and firm actions when sexual assault incidents are reported,” she said.

“Most importantly, they need to ensure that there are support systems in place for survivors so that they feel safe, and are able to report incidents knowing that the university will support them and take action.”

If you are in need of support, the following services are available to help: