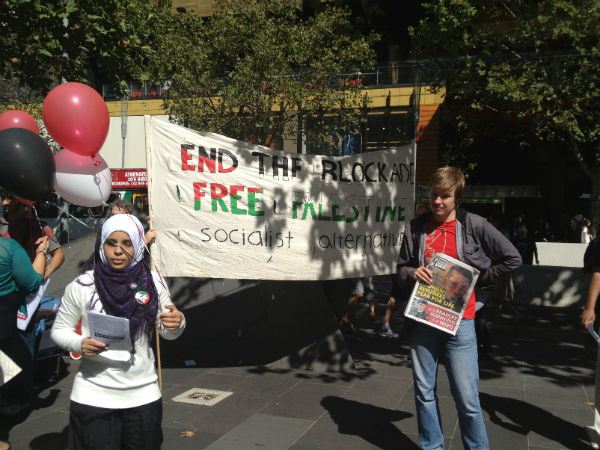 Hot on the heels of a recent victory against Israeli company SodaStream, student group Students for Palestine has focused their attention on another major company – BAE Systems.

Armed with placards and balloons in the colours of the Palestinian flag, hundreds of students from several universities marched from the State Library into RMIT University on Wednesday in protest of the University’s relationship with a company renowned for supplying weapons to the Israeli army. Frequent chants of ‘free, free Palestine’ accompanied the crowd on their march, while a strong police presence was felt but ultimately not needed.

BAE Systems is currently the third-largest arms manufacturer in the world and is a major sponsor of RMIT’s aerospace engineering department. The University is also known to conduct postgraduate research for BAE. The UK-based weapons manufacturer has strong links with the Israeli military and have previously provided them with weapons and military technology, as well as ‘Head-Up Displays’ for F16 fighter aircraft.

Students for Palestine, in conjunction with the global BDS (Boycott, Divestments and Sanctions) campaign are attempting to urge RMIT to boycott the products provided by a company that contributes to Israeli apartheid. This follows a similar BDS campaign to the one previously launched against chocolatier Max Brenner, which had strong links to the Israeli Defence Force.

Whether or not the efforts of this pro-Palestinian group will succeed remains to be seen, but they can certainly take faith in the successful venture of Leeds University in the UK whose students recently voted 826-804 in favour of cutting ties with BAE due to its association with Israel.

RMIT’s link with BAE Systems was a recent discovery for Students for Palestine, who are determined to keep up their campaign in order to raise awareness of RMIT’s relationship with BAE. As organiser Yasemin Shamsili said, “today is just the beginning, future events have already been planned.”

Isabelle Laskari is a third-year journalism student at La Trobe University. You can follow her on Twitter @msisabellel