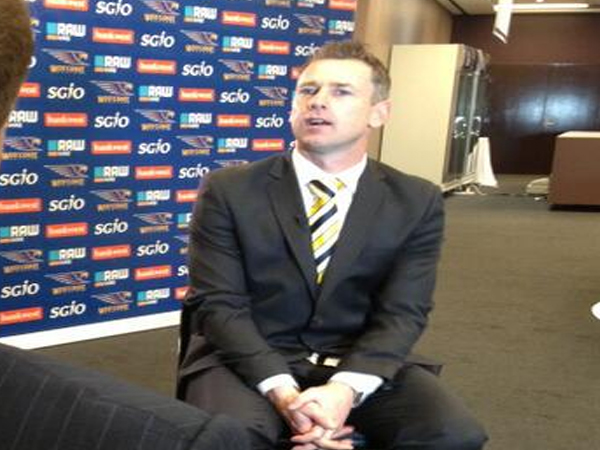 Renowned for his football smarts throughout a 306 game career at North Melbourne, the next logical step for Adam Simpson was coaching.

After a four-year apprenticeship as an assistant coach at Hawthorn, he now moves in the senior coaching position at AFL heavyweight West Coast, a job described as the biggest job in Western Australia.

Michael Itsou: Congratulations on getting the job as the newly appointed West Coast Eagles coach. At what point during your playing career did you first think you’d like to head down the coaching path?

Adam Simpson: I was 28. You start looking at what you want to do after football and I wanted to teach players. After I retired I was fortunate to get a job immediately as an assistant at Hawthorn.

MI: It’s been a big month, being an assistant coach with Hawthorn during the finals campaign and going through the interview processes at both Brisbane and West Coast. How were you able to manage the coaching side of things whilst putting together a presentation of your coaching credentials?

AS: It was tough. You’re trying to win the premiership but you have this on your mind as well. I was spending every minute away from the club working on analysing teams and preparing. I spoke to Melbourne, Brisbane and West Coast so there was a lot of preparation involved.

MI: Can you describe what was involved during the interview process with West Coast?

AS: On the Monday after the grand final I flew over, had a meeting in the morning and then a presentation in the afternoon. On the Tuesday I then spoke with the board. Wednesday I did a three hour psych test online and then they asked me to come back on the Thursday. West Coast also did a reference check on me, roughly thirty people including former teammates, coaches and players I coached.

MI: When you prepared for the interviews, did you have people that assisted you in your presentation?

AS: I did. I’ve got four people I speak to for advice, they helped with the preparation side. Football’s week to week so you need people to call on. During my career I did informal preparations. I also did business management studies to improve my skills in that area

MI: Did you seek out advice from Alastair Clarkson or anyone at Hawthorn?

AS: Not really. We were focused on the finals and didn’t really get into things. I did have informal chats, but it was to keep things transparent. I didn’t want them to open up a paper and see my name in there without knowing what’s going on.

MI: Saturday you’re at the grand final, Monday you’re in Perth presenting to West Coast. How did you manage the transition from the elation of winning the premiership to walking into an interview to become an AFL coach?

MI: You’ve taken over from John Worsfold. How challenging is it taking over from someone who had been in charge of a team for over a decade given the relationships he developed with players and staff?

AS: I haven’t really spoken to the players as most are on holidays. I’ve spoken to some of the staff but the players I can’t really comment on at the moment. Obviously the club went through a down season finishing thirteenth but the list certainly doesn’t reflect that. It was time for a change and the club recognized that.

MI: The final two candidates for the position were former Eagle Peter Sumich and yourself. Was there backlash from supporters given you’re coming over from Melbourne?

AS: So far the response has been positive. The club monitors social media, I’m not sure exactly how, and the feedback has been generally positive. People are excited about a fresh approach.

MI: On the Thursday you were asked to fly over to Perth, uncertain you had been successful. What’s going through your mind as you flew over?

MI: Coming from Melbourne, is there much difference in the scrutiny and coverage football and in particular West Coast is given in the media and the public?

AS: Coming across you don’t really appreciate how big the club is and how driven the club is for success. It’s definitely a smaller environment over there compared to here.

MI: You played under Dennis Pagan at North Melbourne and coached alongside Alistair at Hawthorn, both being dual premiership coaches. Are there aspects of their coaching styles and player management methods you will utilise?

AS: You take things on board, but I want to be my own coach.  I watched how they changed over time. I’ll probably change myself after five years.  There are certainly aspects you take on board. But like I said to West Coast during the interviews, I’m not Dennis Pagan, I’m not Alistair Clarkson. I’m Adam Simpson and I will be my own coach.

MI: What can we expect from an Adam Simpson led West Coast side next season?

MI: Finally Adam, where do you believe you can take the West Coast Eagles?

AS: Everyone is aiming for one thing. I’m not going to make broad statements, but we want to be playing finals. We want make the top four to give us the best chance at winning premierships.

MI: Adam thanks for having a chat and all the best with the Eagles next season and beyond.

AS: Thanks very much, no worries at all.

Michael Itsou is a first-year Bachelor of Journalism (Sport) student at La Trobe University. You can follow him at on Twitter @Mky_Itz