The talent has again been named in Australia’s top team. 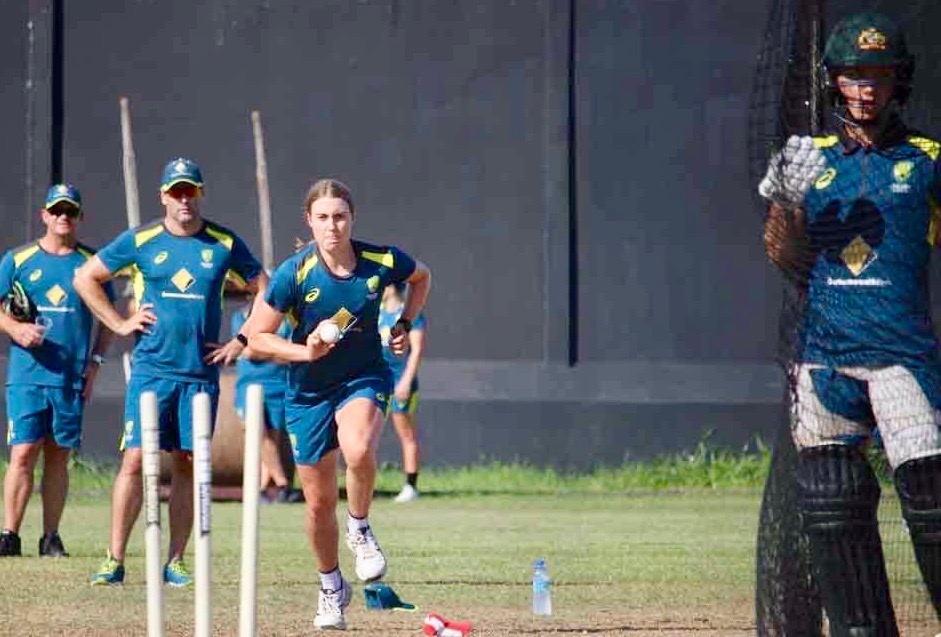 In an announcement made last week, Australian women’s cricketer Tayla Vlaeminck has once again been included in the Australian squad of 15 to compete in next month’s ICC Women’s Twenty20 World Cup.

When she was invited to her first National Performance Squad camp with Cricket Australia back in 2018, Vlaeminck had no idea just how quickly her elite sporting journey was going to take hold.

Identified as part of the next group of players to represent Australia, the then 18-year-old was younger than the other girls, hadn’t played a lot of cricket, and was largely unknown due to injury absences.

“I literally played that one camp [at the National Cricket Centre] and from then got picked. I think it was just so out of the blue,” she told upstart.

Vlaeminck made her Australian cricket debut late in 2018 at the ICC Twenty20 World Cup in the Caribbean. At the time she was yet to play a single domestic Women’s Big Bash League (WBBL) game.

“Once you get into the Aussie team you kind of just have to take a breath and realise where you are,” she said.

While her progression through representative squads was quick, 21-year-old Vlaeminck has been continually held up with serious season-ending injuries, including two complete anterior cruciate ligament (ACL) knee reconstructions and a dislocated shoulder. A recent setback for Vlaeminck, a partially torn ACL sustained during the 2018-19 WBBL season, occurred in the lead-up to the most prestigious moment of her career: a potential Ashes debut.

“I was pretty shattered about it because I thought I’d finally got over the brunt of it (injuries) and was getting some time on the park,” she said.

To forge a new path to the Ashes series, Vlaeminck spent a lot of time in the gym with Cricket Victoria’s Physical Preparation Coach, Noel McCarthy. She speaks of his dedication and willingness to work beside her through the entire rehabilitation process, and how his conditioning enhanced her case for inclusion in the tour of England and beyond.

“He single-handedly got me right,” she said.

For Vlaeminck, the dream was to play a test match for Australia, so finally being recognised with baggy green no. 176 was a surreal moment.

“When Mitch Starc’s presenting your cap, you’re so star struck you can’t really take anything in that he’s saying, until you go back to your apartment that night and watch the video again and realise just how cool it was,” she said.

Vlaeminck’s latest selection into Australia’s Twenty20 World Cup squad comes after her first outing sporting the green and gold on Australian soil, competing in the CommBank T20I Series against Sri Lanka in October last year.  Throughout the series, Vlaeminck troubled the Sri Lanka batting unit taking a wicket in every game.

However, with the prospect of defending Australia’s title in front of friends and family, Vlaeminck admits that playing with the home advantage can add to her nerves.

“It kind of caught me off guard a little bit how nervous I was, looking around there [the Sydney Cricket Ground] were probably four or five-thousand people all dressed in Aussie colours watching on,” she said.

Playing consistently has also allowed Vlaeminck to develop in different areas, build up her confidence and unleash pace and bounce on the crease. Already renowned as one of the quickest women bowlers in the world, Vlaeminck’s distinct right-arm hyperextended technique continues to grow more powerful with practice.

Often labelled as a point of difference within the Australian line-up, Vlaeminck utilises her speed to execute her role, put simply, to run in and bowl as fast as she can.

“Running and trying to bowl fast is my job, and I’m really enjoying doing it,” she said.

Considering where she’s been and what’s still to come, Vlaeminck is happy soaking up her current opportunity, approaching things both on and off the field in a not too serious, light-hearted way.

“I know I’m playing my best cricket when I’m having a good time,” she said.

Tayla and her Aussie teammate’s efforts to go back-to-back in the Women’s T20 World Cup begin on February 21 at the Sydney Showground Stadium, after completing a warmup T20 Tri-Series against India and England in Canberra and Melbourne.

Article: Emily Patterson is a first year Bachelor of Media and Communications (Sports Journalism) student at La Trobe University. You can follow her on Twitter @empatterson_ltu