For Calvin, life has been rough, but the flats have always been a place of community. 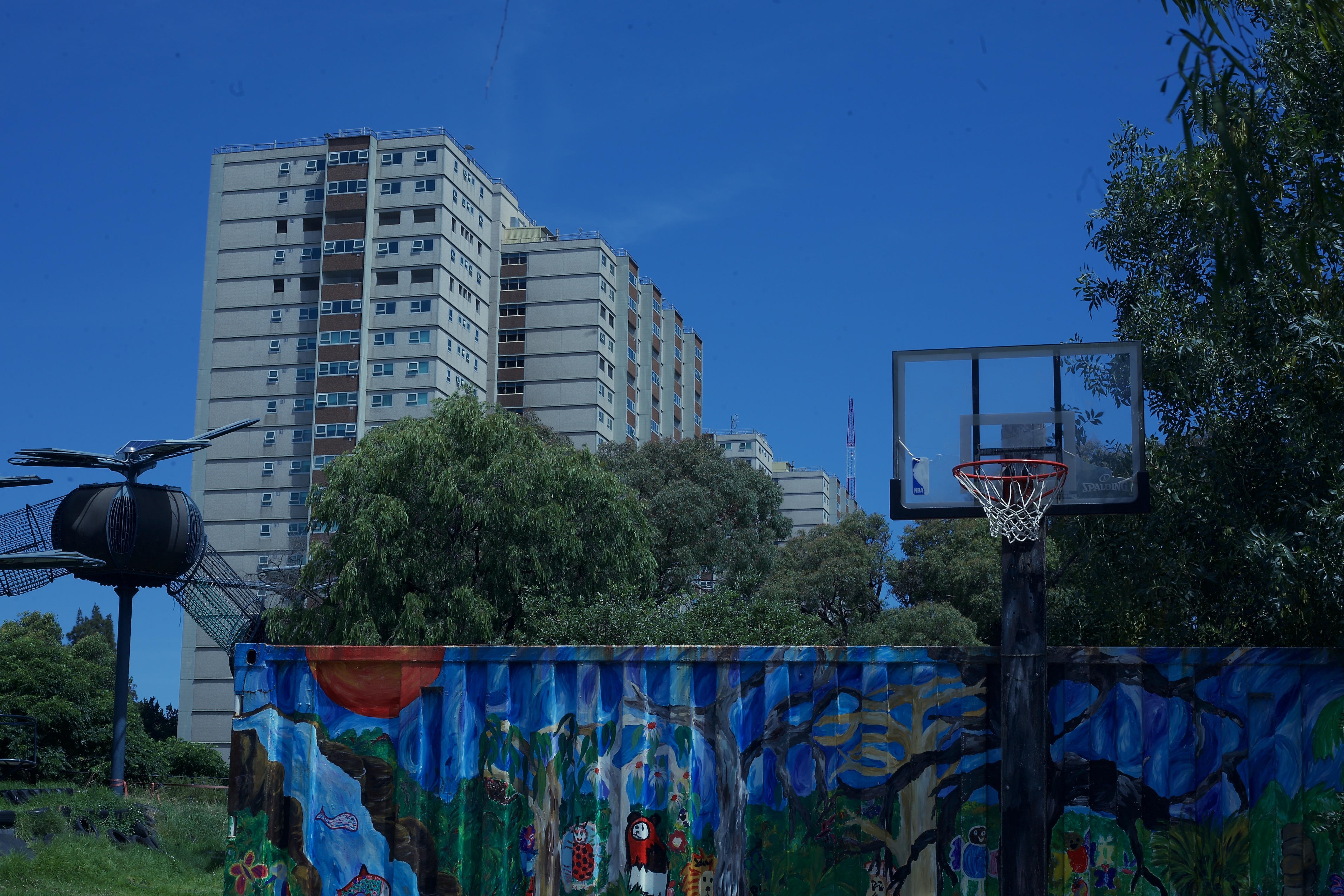 It takes a while to finish my interview with Calvin. He cancels or pushes back the time we’ve arranged to meet so many times that I have to admit, I nearly gave up on him.

For the third interview, we finally get to meet in person. Calvin arrives late on a stolen motorbike. We make a stop at the supermarket where he buys a pack of Winfield Blue, a bottle of Coke and a Fanta, and of course, a red lighter. He always buys red because red “is a gangster ass colour”.

Calvin has tattoos across both hands and arms. On his neck the words ‘loyalty, respect, family and honour’ are written in Japanese scripture. He lives in commission housing, sleeping from flat to flat. He got out of jail recently and smokes ice. He’s had it tough and he looks it, but he’s also a man who describes himself as a butterfly.

He starts off explaining to me the system for defying the system. It’s all about disguise, he says. He tells me how to dress to pretend you’re one of the food-delivery services, so you can slip under the radar. All you’ve got to do is get a top or bag with the logo and just wear some black jeans.

“You know those ugly baggy ones like… the ones you’re wearing,” he says to me.

Dressing nice is important to Calvin. On a good day, he likes a fresh haircut, his eyebrows done, fresh outfit and of course fresh shoes.

“[I] feel like a million bucks yeah, and that’s how I like to feel every single day,” he says.

His shoes were his prized possession before getting locked up. He had 125 pairs but got robbed of everything when he was in jail.

Charged for drug trafficking, Calvin got out after one month because it was his first offence.
He calls jail a holiday.

“Like eating three times a day and you know you get sleep. It’s like camp,” he says.

Calvin and his family have been living in multiple flats across the Fitzroy, Collingwood and Richmond commission housing estates. The rooms he’s found temporary refuge in make up only a small piece of the 20-30 storey complexes that stand unhidden in the Melbourne skyline.

Calvin is twenty now, but says he did most of his growing up at eight. He’s got seven siblings that he knows of, but his dad has a lot of kids, too. He says he had a lot of responsibility put on him early on.

“I was always independent. I was pretty much growing up at a young age way too fast. ‘Cause like living in the flats and obviously ‘cause my mum and dad weren’t together.”

Growing up, he lived with his mum sometimes but spent a lot of time with his dad and his girlfriend, and two little brothers.

“You could say she was my step-mum, but f-ck yeah, they’d have domestics or whatever, and then sometimes me and my little brothers sometimes be living down the streets or cops and sh-t come. Or they’d be taken by DHS or like they’d both leave and then they won’t come back for a couple days, and we’d be eating people’s leftovers and staying at neighbours and sh-t’s house.”

Calvin describes the flats as a community, though. And again the notion of camp is applied, as he talks about public housing having its dorms and surrounding neighbours.

“Like you know everyone and everyone. You know who’s good and who’s your friend and who’ll look after ya,” he says.

“You always look after each other you know, even though they might have something on.”

Calvin preaches kindness a lot, and the importance of family and community. He surrounds his whole life around this notion of looking out for people and emphasises that the flats and the people in them are mistakenly given a bad name. Sure, it’s “the ghetto” he says, but it’s also a community of people who have each other’s backs, and more so than they do in the city, he thinks.

These days, his mum has her own place and a partner. Calvin’s lived with her for a lot of his life too, but since getting out of jail he’s been back in the flats with his dad. He says he couldn’t bear to live with his mum after she found out what he’d been up to. Calvin and his dad stay between flats with different people.

I asked him what he needs to improve his situation and to get off ice. The key he says, is stability. For now though, he doesn’t want to get off ice because it helps him with his ADHD, and he hasn’t found anything else that makes him feel “normal”.

He says he tells everyone that he could get off it if he wanted to, and he’s got a plan for when he does.

“Find myself the perfect misses, settle down, go back to work. And enjoy, make money, feel like I’m on top of the world again.”

He says his past relationships haven’t been “the ones”, though. His last relationship sent him into a downward spiral and left him feeling suicidal. He said she had a lot of mental health issues and that she tried to stab him once and would start throwing punches while he was driving.

Calvin says he’s a real family man and he definitely wants kids someday, but it’s got to be with the right woman, he says. I asked him what kind of life he’d want for them. He told me “you can’t give them the world”. He’ll give them what he can and that they can do what they please, as long as they’re open about it, because he’ll probably have already done whatever they’re going to do.

When Calvin was a kid he wanted either to be a tradie or to work at a zoo. His fondest childhood memory was also at the zoo. He says it was his dad’s proudest moment, too, because he accomplished taking all of the kids out on his own. Calvin speaks of the butterfly enclosure and how all of those “niiice looking butterflies, like elegant yeah” would land on his clothes.

“It’s peaceful and it brings something to ya, and then it goes. That’s how I look at myself. Because some people have a big impact in your life and some people don’t. But then you always be nice, like not attacking and sh-t. Like have you ever seen a butterfly attack someone before?”

I asked him why he took this interview and why he was so willing to be completely honest and share his life story with a stranger. Despite it being hard to get hold of him, it’s always been clear he wants to tell his story.

“Because of people that are in the same state as me. Some people are embarrassed…or just don’t say anything and just leave it as it is. Whereas if someone else can say it, and just say it how it is, and speak-up it’s alright. And then they can actually be like, ‘ah well’, since someone else has said something, maybe I should say something. And that’s how protest and freedom of speech movements happen. If one speaks up, then eventually they all speak up.”

Article and photo: Sofia Jayne is a first-year Bachelor of Media and Communications (journalism) student at La Trobe University. You can follow her on twitter @SofiaJayne_