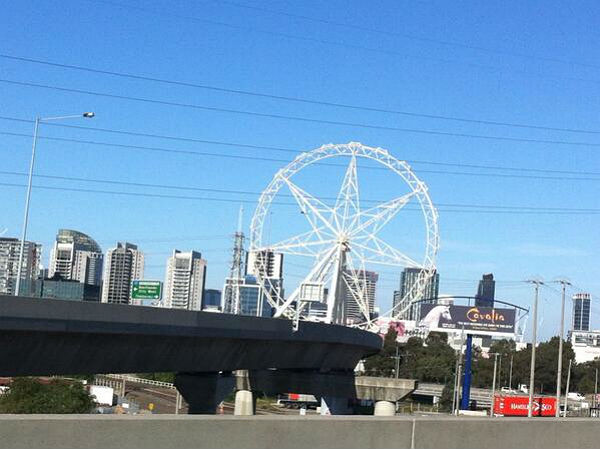 In December 2008 news articles began to trumpet the imminent opening of what was supposed to be a premier Melbourne tourist attraction – one that could rival London’s Eye.

This week the Melbourne Star had the first of its 21 cabins attached, signalling a change in the project’s drawn out history.

In 2006 when construction began on the wheel, the Bracks government reportedly budgeted $40 million.

“I think it’s going to be one of the key places where people gather as a part of the 2006 Melbourne Commonwealth Games,” Mr Bracks said at the time.

Both projections proved to be unrealistic.

Anyone know why the wheel is still not working on Melbourne pic.twitter.com/SZtDmGaxBI

The wheel opened for the first time in December 2008, almost two years behind its scheduled opening date.

Just 40 days after it opened to the public, the wheel was shut down.

Fourteen cracks were found in the steel frame, causing significant buckling to the wheel. While developers blamed Melbourne’s searing summer temperatures, structural issues were eventually found to be responsible.

In November 2011, another setback occurred when strong winds caused the wheel to shatter its restraints, forcing construction workers to flee the site. The opening date was pushed back again, this time to April 2012.

Since then, developers ING Real Estate and construction magnate Hansen Yuncken, have continuously delayed the opening date. Spokesman for ING, Ken Davis, has laid the blame squarely on Melbourne’s fluctuating and unpredictable weather.

“The construction of the Southern Star is heavily influenced by Melbourne’s weather, including wind and rain, and 70 per cent of available construction time is being lost each week as cranes and lifts on the site cannot operate in bad weather,” Davis said.

The wheel was originally the centrepiece of a $900 million revamp of Melbourne’s Docklands district. While the remaining projects surrounding the precinct have been completed, the wheel remains the last, and largest, piece of the puzzle.

The Docklands revamp attracted excited traders eager to cash in on their piece of the tourism pie. Instead, with the wheel remaining unfinished, the expected influx of tourists has not eventuated and local businesses are struggling.

Some business owners, including restaurateur Josh Wallace, are even considering closing their doors.

“During the week, it’s a ghost town, not Harbour Town,” Wallace told The Age.

“Turnover is terrible. If we don’t do good numbers, there’s the possibility of the place being handed back over.”

Other owners have said they simply don’t trust any rumours from shopping centre management regarding possible opening dates for the wheel.

Melbourne’s Lord Mayor, Robert Doyle, has claimed the opening of the wheel is critical to the survival of businesses in the Docklands district.

In August 2012, Doyle was heard on ABC Radio discussing the possibility of having the wheel “up and running by New Years Eve”.

That interview was met with a statement from ING saying the wheel could open in January 2013, but only if there was “no wind and no rain for the next four months”.

With the wheel still at least six months from completion, the original price tag has blown out to a staggering $100 million.

Geelong is in desperate need of a 32-bed, urgent care facility to alleviate pressure on staff at Geelong Hospital. Such a facility would cost between $30 and $40 million. Without the wheel, three could be built.

Thirteen new schools need to be built to support Melbourne’s outer western and northern suburbs, at a cost of roughly $19 million each. Without the wheel, Victoria could afford another five.

Instead of a thriving tourist attraction, the Melbourne Star Observation Wheel is an eyesore that dominates the inner northwestern skyline. It’s a project with no set completion date that continues to frustrate local business owners.

It’s unfathomable that an observation wheel – one seemingly built solely to compete with the likes of London’s Eye and the Singapore Flyer – could take precedence over community necessities like schools and hospitals.