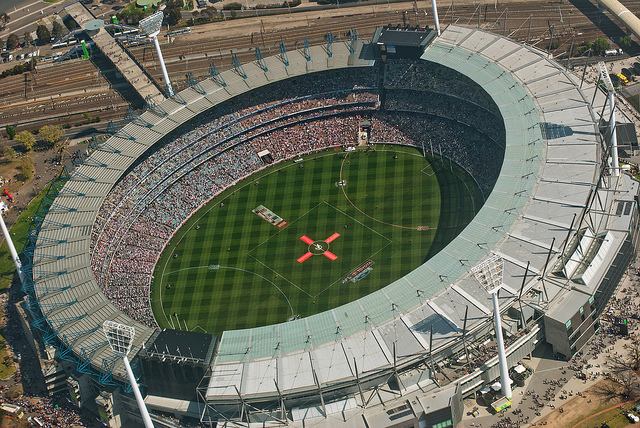 Goal after goal the margin continues to increase. Sections of the crowd begin to pack their bags and exit the MCG as their beloved AFL team endures yet another loss.

The Carlton Football Club will go down in AFL history as one of the strongest and most successful teams in the league. Lately, however, the team risks being remembered for its recent period of consistent losses as they embark on an era of “rebuilding”.

After only attaining one win in the 2018 season thus far, Carlton remain at the bottom of the ladder. The probability of acquiring the wooden spoon has become ever more realistic.

He recently told AFL Tonight that he believes the Blues are going to “lose a generation of supporters”.

Meanwhile, supporters have taken to social media to express their dissatisfaction with the team’s performance.

One Instagram user declared their frustration, “breaking up” with the club online.

“@carlton_fc have some serious soul searching to do. I’m done. That hurts to say, but I’m out,” they wrote.

Another supporter claimed he was now too ashamed to support the club he has followed since he was a young child.

Many teams have gone through similar, dark periods during restructures. Back in 2013, the Western Bulldogs commenced their list “regeneration”, which did not initially contribute to any significant development. Then, in 2015 off-season, the club endured a loss of over 700 games worth of experience to high profile trades. Unbeknownst the club at the time, this would ultimately contribute to their 2016 premiership.

Hawthorn finally paved the road to success back in late 2004 when Alastair Clarkson began to strategically restructure the playing list. Although it took a two-year period on the bottom half of the ladder and a bitter sweet loss in the second elimination final of 2007, it would eventually lead to nine finals and four flags.

If there is one lesson to be taken from these past examples, it’s that these restructures demand fortitude from fans. What do AFL clubs do to maintain morale?

“We trust in the process and believe in where we are headed as a football club,” he said.

“We’ve been upfront with our members regarding our rebuild process and have made it clear that laying the foundations that house success takes time. In striving to achieve sustained success, we ask our members to trust the journey, even if it takes time.”

The numbers tell a promising story, with the club currently holding the highest number of memberships in the club’s history. Sitting at just below 54,000, Carlton Membership Manager, Alex Jolley, believes the club is on track to hit 55,000 members in 2018.

“We are of the firm belief that we should not let on-field performance impact one’s engagement with the club or their want to be a member,” he told upstart.

“Being a member of a football club means more than just the team winning on a weekend.”

While some frustrated fans have broken up with the team via social media, others agree.

Lifetime member Jess Sultana continues to purchase her premium membership each year. She is staunchly of the view that she will never support another side.

“Why only support the team during their good times? You have to stick by them through thick and thin,” Sultana told upstart.

New member Nasia Iero has grown to love the club in a different way during their rebuild. She claims that she’s never been so actively involved in attending matches than she is now.

“This year I wanted to completely support the club I’ve grown to adore. I want to be up front cheering for them at every possible moment,” Iero told upstart.

Another who has maintained loyalty despite team performance is Cheersquad ‘Godfather,’ Risto Kurilić.

Kurilić began supporting Carlton due to their multicultural connections with his local ethnic community during his teenage years. After maintaining his membership for 43 years, he claims the club has allowed him to meet his new family.

“I attend every game; both home and away, interstate or in Melbourne,”Kurilić told upstart.

“We’re a family that travels together. I’ve been to [Cheersquad members’] weddings, birthdays and even funerals.

“We can see that the club is rebuilding, and if you’re a true supporter you don’t run away. If your son comes home from school with a D on his exam, you’re not going to kick him out. It’s the same thing. We will prove them wrong.”

Monique Naumovski is a first year Media and Communications (Journalism) student. You can follow her on Twitter @moniquenaum