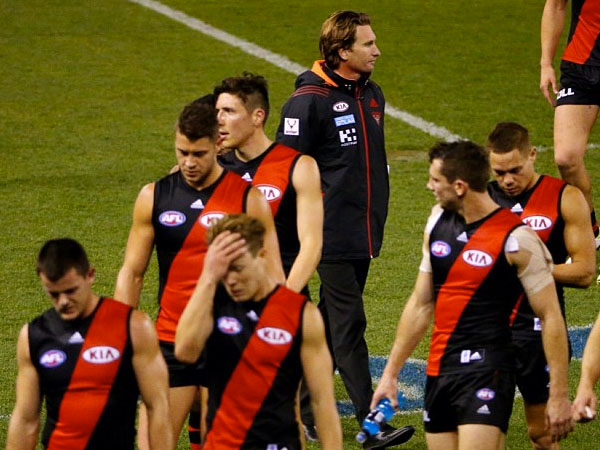 Amidst the reporting of the drugs scandal which has engulfed the Essendon Football Club, it was perhaps only a matter a time before someone wrote an open letter to AFL chief executive Andrew Demetriou demanding a speedier process to resolve the matter.

In The Sunday Age, Guthrie – who is an Essendon member – wrote a piece which argued the club has already endured enough and the process has taken far too long; “time” has been served, says Guthrie, and all should be forgiven. Or at the very least, only a small punishment should be handed down.

A closer examination of Guthrie’s arguments shed light on why what many Bombers fans continue to argue don’t quite stack up.

The first contention of Guthrie’s is Demetriou, or the AFL, doesn’t “seem to have turned up anything illegal” and that the players “have done nothing wrong”.

There are a couple of problems with those statements.

The first is that there’s little evidence in Guthrie’s piece, other than what his “lawyer friends” believe, as to what evidence the AFL will produce at the hearing scheduled for August 26.

More importantly, there is an ongoing ASADA investigation into Essendon, which is yet to result in a final report. The current charges faced by Essendon are based on the interim report delivered by ASADA to the AFL, as well as the club-commissioned Ziggy Switkowski report.

Let’s consider those two separately for a second.

The interim ASADA report is labelled an “interim report” for a reason.  As part of its investigation into organised crime and drugs in sport, ASADA has, between February 7 and May 30, reviewed 50,000 documents and conducted 113 interviews. The statutory body is reluctant to provide running commentary on the Essendon matter, but media reports suggest more interviews have been conducted since. However, ASADA is yet to finalise its investigation.

And so, there is a real possibility ASADA could allege players have been injected with prohibited substances, and perhaps knowingly so. Until the final report is handed down then, we cannot say for certain that players have been cleared.  The AFL has itself said this, and that the players will not be charged “at this point in time”.

Of course an entire debate can be had on whether delivering an interim report is the right course of action. Either way, it’s perfectly legal. A quick look at the ASADA website reveals why.

Under clause 4.21 of the National Anti-Doping (NAD) Scheme, the ASADA CEO is entitled to disclose information to a sporting administration body (such as the AFL) in connection with ASADA’s investigation. Further, under Article 4.7 of the AFL Anti-Doping Code, ASADA has an obligation to report to the AFL on the exercise of its anti-doping functions, including its investigative functions. These are the bases on which the interim report has been provided to the AFL.

While the interim report was supposed to remain a confidential one, parts of it have been leaked to the media – as is often the case with big stories.

Here’s the wording of the first charge by the AFL, which has been reported by ABC broadcaster Gerard Whateley on AFL 360 and Offsiders.

Alternatively the club is unable to determine whether players were administered substances prohibited by the code.

The first part of the charge clearly shows that what the AFL is asserting is that this is more than just an issue of governance. This is very much about the alleged use of prohibited substances as it is about procedural matters at Essendon. Therefore, Guthrie’s “so you will have to go the governance route” argument doesn’t quite stack up either.

As for the Switkowski report, Guthrie says: “Ziggy might be a well-respected businessman with particular skills in running a telco, but I’m not sure he has any expertise as an investigator.”

Forgetting the fact that the Switkowski report is a damning one for the club, the author’s credibility has not been one of contention. Dr Switkowski has more than just “particular skills in running a telco”. He’s the Chancellor of RMIT University, and has a PhD in nuclear physics – which he obtained at just 24 years of age, mind you. In addition to “running a telco” (in case you’re wondering, that’s Australia’s largest telecommunications company, Telstra), he was the chair of the federal government’s inquiry into the viability of a domestic nuclear power industry and remains on the board of several large institutions. He was also asked by the, former, Essendon chairman to conduct the review into the club’s governance processes, which covers the period between August 2011 and May 2013.

But given this is all very complex, luckily Guthrie makes several suggestions as to how Demetriou can proceed.

The first is for Demetriou to reflect about what’s happened over the past year. Sage advice, because apparently it’s doubtful Demetriou has done that.  However, as a throwaway comment not to be taken lightly, Guthrie claims: “If the goal of the investigation was to force Essendon and all other teams to improve processes and protocols, it has surely served its purpose.”

Except of course, that’s not the goal of the investigation. ASADA says it’s investigating because: there have been possible anti-doping rule violations committed in sport; there’s a threat to the integrity of sport through the potential infiltration of organised crime; and there’s a major health risk for athletes who may have taken substances not approved for human use. And so, until the final ASADA report is delivered and these questions have been dealt with, the investigation has not served its purpose.

The claim that the four senior Essendon officials who have been charged by the AFL are “poor managers, maybe, but not drug cheats” and that if the AFL persists “the whole thing will be stuck in the courts for years” ought not to be a factor in this discussion at all.

The club, players and senior officials are all, of course, deserving and entitled to the presumption of innocence. No one can dispute that. But they are charged with a serious allegation and if they choose to appeal any findings and defend it in court, so be it.

Yes, the game will be hurt. It could have serious ramifications for the club, its fan base, its sponsors, and the health and wellbeing of those at the centre of the investigation. We’ve already seen the personal toll it has taken.

But what’s the alternative?

Sports that have failed to deal with anti-doping behaviour and dodgy practices – such as international cycling and baseball in the US – have caused damage to themselves which are almost irrevocable. This cannot be allowed to happen here.

It’s commendable that Essendon self-reported to ASADA at the start of the year. And that the AFL is taking the issue seriously.

Sure, debates can be had about the process, leaks to the media and the like. But when analysing the matter, we need to be able to go beyond looking through red-and-black coloured glasses.

Because the alternative is that journalism suffers as much as the sport has.

And that is too horrible to contemplate.

Erdem Koç is a lecturer in journalism at La Trobe University. You can follow him on Twitter: @erdemkoc