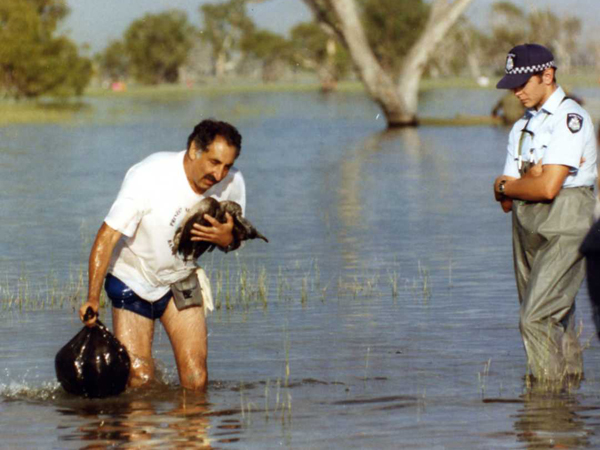 Laurie Levy has been a vocal opponent of duck shooting for the past twenty years.

As the campaign director of the Coalition Against Duck Shooting (CADS), he has made protecting the native water birds of Victoria his life mission.

His team of rescuers risk their lives to go into the duck shooting zones and save wounded ducks left behind in the water by hunters, all while garnering important media attention.

CADS first entered the scene in 1986 with fifteen protesters against 100,000 duck shooters. Today, duck hunters numbers have dwindled down to 20,000 while Levy’s team has expanded.

Between the 16thof March and the 10th of June it is open season for the shooting of game ducks in designated areas across Victoria.

To some, duck-shooting season is vital for Victoria’s tourism industry as well as for the conservation of its wetlands.

To others, including Levy, it is legalised cruelty that endangers the lives of some of the rarest birds in the world.

Levy thinks his peaceful activism is vital for the safety of the feathered targets.

“I see our role as being similar to a public relations company and the birds are our clients. We have to get publicity for them, as that how you win your issue. Years ago the pen was mightier than the sword, well in today’s age the camera is certainly more powerful then the gun,” he says.

Duck shooting has already been made illegal in New South Wales, Western Australia, the ACT and most recently in Queensland in 2005; yet Victorian duck-shooting seems to be holding firm despite changes in public opinion.

The most recent poll by Roy Morgan found that 75 per cent of the public believed the shooting of native water birds should be banned within Victoria.

“Every time a duck shooter pulls the trigger they spray 200 steel pellets. Pellets that lodge near nerves, bones and vital organs. It’s been recognised now that at least one in four birds that are shot will fly away wounded and that’s unacceptable,” says Levy.

The RSPCA has said that as many as six are crippled for every ten that are killed. Even the Victorian government’s own Animal Welfare Advisory Committee has called for recreational duck shooting to be banned on the grounds of cruelty.

This season to date, 334 shot ducks found left to rot, 161 of which are non-game species & 84 are rare freckled ducks. Well, @PeterWalshMP?

Levy and his team of rescuers have had first-hand experience dealing with wounded ducks that have been left behind in the water by hunters.

“It’s like a war zone. I’ve always seen our role as similar to the Red Cross, we go into the war zone to help the innocent victims and we’re picking up broken bodies. We don’t like it but we have to be there,” he says.

Some argue though that duck shooting season serves a positive purpose. According to the Department of Primary Industries, excessive flooding between 2010 and 2012 has boosted the population of native ducks for this coming season. As such, hunting could ostensibly serve a second purpose this year: conservation.

However, this is a contentious assertion as many – including the RSPCA – believe high water bird numbers are actually beneficial to their local environment, as they control pests such as snails.

One of the key conflicts in terms of conservation is that rare and endangered birds often fall victim to duck shooters, despite being protected from hunting.

The Freckled Duck, for instance, is native to Australia and is one of the ten rarest water birds in the world. Levy has recovered hundreds of illegally shot Freckled Ducks bodies during his work, including almost two hundred in the Box Flat massacre in March.

There are serious concerns for the future of the species within Victoria.

Another perspective from hunting advocates is that duck hunting provides a much needed boost to the tourism economy in these areas. However, Levy says that the tourism industry could be redirected to work with the environment instead of against it.

“Once duck shooting comes to an end, Victoria could be a major wetlands tourism destination. There’s a whole wonderful history that goes back some 40,000 years. There are 100 million bird watchers overseas and once the shooting goes it could be bringing tourists in and have a vital wetlands tourism industry here, which would bring in money,” says Levy.

With the numbers of duck shooters now only making up 0.4 percent of Victoria’s population, Levy strongly believes that duck shooting being banned in Victoria should be an inevitable fate.

“Duck shooting is one of those old activities that belongs in the past, it really has no place in the 21st century,” he says.