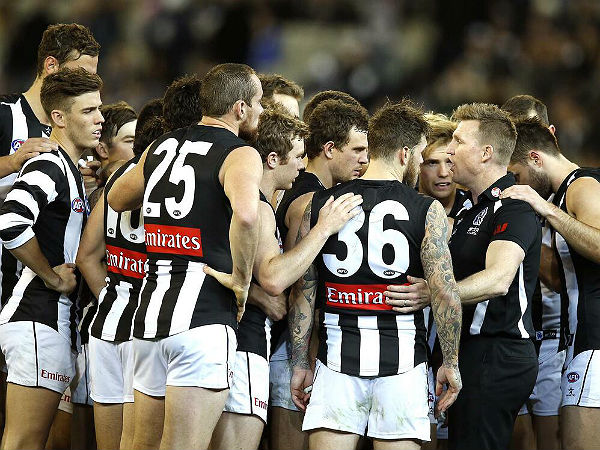 “Some scribes were saying during the week that (Carlton) have been better than us this season. It’s not about Carlton versus Collingwood, but I reckon it’s time for a reality check to assess where we are at. We’re doing all right.”

Nathan Buckley’s Pies made a statement on Friday night. 28 points down midway through the first term, Collingwood kicked 15 of the last 20 goals to thrash their old rivals Carlton by 41 points in front of a packed MCG crowd.

Without Harry O’Brien, who was granted personal leave after an alleged falling out with Buckley, Collingwood’s intensity and pressure was near the best its been in season 2013.

Rebounding from a thrashing at the hands of Port Adelaide last week, Collingwood put three games between themselves and the Blues in the top eight and sent a message, or spelt it out in Buckley’s case, to the rest of the competition – write us off at your own peril.

After four straight wins, Richmond was brought back to earth on Saturday afternoon by a rampaging North Melbourne outfit, losing by a massive 62 points at Etihad Stadium.

The Tigers looked lethargic and unable to contain the explosive Brad Scott game plan, with the Roos banging on eight unanswered goals in the second term to rush to a 53-point half time lead.

It was a severe reality check for Richmond, who looked to be cruising after some rather comfortable results of late. Yet to beat a side above eighth on the ladder, the Tigers are showing vulnerabilities to be blown out of contests.

With unconvincing defeats coming against Geelong, Essendon, Collingwood and now North Melbourne, Damien Hardwick’s men still have a lot of work to do before they can dream big in September.

The curse lives on

It has now been five years, 1562 days and 11 games since Hawthorn beat Geelong; since Jeff Kennett gave his famous speech; since the Kennett curse began.

On Saturday night, the Cats dished out even more misery to the Hawks, with a brave 10-point win in front of over 85,000 at the MCG. Geelong raced out of the blocks and into a 33-point lead early in the final term, however typical of this rivalry, there were more twists and turns to come.

Five Hawthorn goals in less than 10 minutes, including one from an incorrect interchange infringement decision, brought the margin to within a kick. But Geelong had the mental edge. Josh Caddy steadied the ship; Jordan Murdoch iced the win.

It was pure delight for the Cats, who moved level at the top of the ladder with Hawthorn. But Geelong would now love nothing more than to meet the Hawks once more in season 2013 – on the final day in September, where they could make right the ultimate wrong.

Jobe to miss a month

Many called for Essendon skipper Jobe Watson to be stood down last week after admitting to taking the banned substance AOD-9604. While he may not have been stood down as such, he will now miss a month of football after breaking his collarbone in the Dons’ 30-point win over Port Adelaide.

Watson copped the knock late in the first quarter and was immediately substituted off the field by Essendon’s doctors. However the Bombers stood tall despite his absence to hold off a spirited Power outfit.

Essendon has now won four matches in a row to seal up third spot, however will have to the Bulldogs, GWS, Hawthorn and Collingwood without their influential skipper.

Player of the Week – Joel Selwood

Not many Geelong players like losing to Hawthorn, but none more than their skipper Joel Selwood.

The Cats hardman was at his best on Saturday night, racking up 34 disposals (19 contested), eight clearances, seven tackles and kicking a goal.

Selwood was in and under at every contest, never shirking responsibility and leading from the front as the Cats recorded their 11th straight victory over Hawthorn.