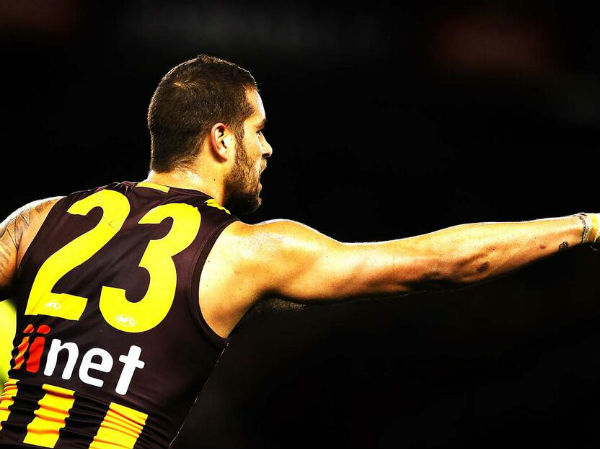 As the Essendon drugs scandal escalated towards its seemingly brutal conclusion, the Bombers’ on-field performance on Friday night reflected arguably the worst seven days in the club’s long and rich history.

Essendon was completely swept off the field by a clinical Hawthorn side, who cemented their spot on the top of the AFL ladder with a 56-point win at the Etihad Stadium.

However in much more important matters for the Dons, they watched as coach James Hird was hounded by the press for his involvement in the situation, while chairman David Evans resigned just 24 hours later.

With ASADA likely to hand out their findings and subsequent penalties on August 5, there could yet be more dark days for Essendon in the coming weeks, months and potentially years.

Greater Western Sydney made Collingwood work for their win on Saturday evening, pushing to the final siren on the back of seven goals from young forward Jeremy Cameron.

The Giants’ first-half performance was inspired by a sensational seven-goal haul from Cameron, with the 20-year-old remarkably booting seven straight from his first seven kicks.

GWS may still be without a win in season 2013, however the performance is likely to please coach Kevin Sheedy, who celebrated his 372nd and final match at the MCG in the loss.

It wasn’t pleasant viewing on Saturday as two contests finished with 100+ point thrashings.

North Melbourne began the proceedings when it overran Melbourne in the second half to win by a whopping 122 points.

Then, on Saturday night, St Kilda was held goalless in the second half as Geelong ran rampant at Simmonds Stadium to win by 101 points. The Cats were at their blistering best after a sluggish first term, kicking 17 goals to one after quarter time to record a triple figure margin.

Touted by many as the premiership favourites at the beginning of the season, West Coast’s finals chances are all but gone after a 22-point loss to a spirited Western Bulldogs on Sunday afternoon.

The young Bulldogs showed a sign of things to come, with rising stars Luke Dahlhaus, Tom Liberatore and Koby Stevens combining with older heads such as Adam Cooney, Ryan Griffen and Robert Murphy to hold off a poor, albeit injury depleted, Eagles squad.

The loss leaves John Worsfold’s side three games outside of the eight with five games remaining in the season, and with Port Adelaide and Carlton both registering wins on the weekend, their finals hopes are in tatters.

Player of the Week – Lance Franklin

Returning from a two-week break on Friday night, Buddy Franklin hardly looked a player that has been dubbed out of form, injured and distracted throughout season 2013.

Franklin continued his fantastic record against Essendon, with the star forward booting eight goals in a dominant display as Hawthorn won by 56 points to seal their place at the summit of the AFL ladder.

The in-demand Hawk has now kicked an incredible 45 goals against the Bombers in his last seven matches against his most favoured opposition, with his eight goals on Friday complimenting earlier hauls of nine, nine and three sets of five.

Along with his final tally of 8.3, Franklin had 19 disposals and took five marks inside 50 throughout the night.