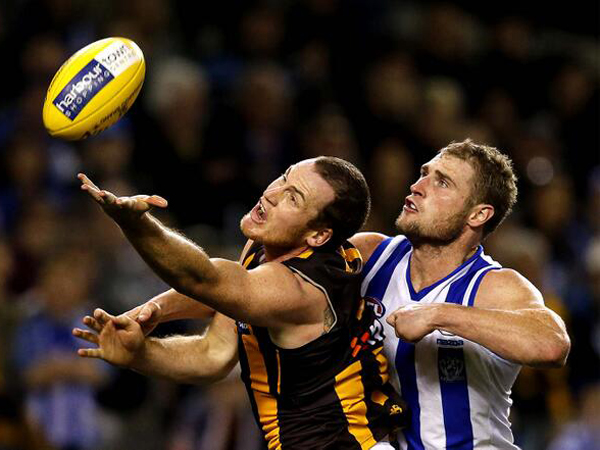 A tale of its season

North’s season was reflected in its thrilling 14-point loss to Hawthorn. Just like much of its season, the Roos got the jump on their highly-fancied opponents, leaping out to a 26-point lead, before fatigue kicked in, and it struggled to hold off the inevitable Hawthorn comeback.

There were plenty of positives, but again Brad Scott’s men couldn’t find the winning formula. The narrow defeat was the tenth loss under 16-points this year for North.

With September right around the corner, many Kangaroos fans will be thinking of what could have been.

Geelong proved that it’s ready to hit finals football head-on, with a convincing 44-point victory over Sydney, at Simonds Stadium.

The Cats were on top from the outset, and completely outplayed the reigning premiers.

With all of the news, rumours, press releases, accusations, denial, grandstanding and statements that have played out in front of Melbourne’s insular AFL-centric media this week, it was easy to forget that Essendon still had an important match to play on the weekend.

Yet for some, it wasn’t to be a game quickly forgotten.

In an epic, although scrappy, contest, Essendon prevailed over Carlton through a solitary David Zaharakis goal, with under 30 seconds remaining, in what may well be James Hird’s last game coaching Essendon.

The Dons fought bravely to secure the victory amid increased speculation that Essendon will be stripped of its 2013 premiership points, for bringing the game into disrepute.

Hird is also likely to be sanctioned with a 12-month suspension, although he hinted in a post-match press conference that he may return for season 2015.

With the official penalties likely to be confirmed today, the football world could be in for another big week. This rollercoaster certainly hasn’t stopped.

Just a week out from September, Fremantle has given Port Adelaide a teaser of what to expect come finals time, defeating a young and relatively inexperienced Power side by 74 points.

While Port Adelaide has improved dramatically under Ken Hinkley this season, Saturday night highlighted just how far it is from the top teams, as Fremantle’s dominant forward line fired at Patersons Stadium.

Fremantle forwards Matthew Pavlich and Hayden Ballantyne both bagged four each, while Michael Walters kicked three, as the Dockers stormed out of the blocks to comprehensively beat their opponents.

With a trip to Melbourne, to face either Collingwood or Richmond at the MCG, in the first week of September, Port Adelaide must improve if it is to be competitive.

Player of the Week – Steve Johnson

A player gifted with flukish talent and an abundance of skill, Geelong’s Steve Johnson has added brutal consistency to his game in 2013.

Moving into the midfield, since coming back from an injury early in the season, Johnson has been able to dominate games and dictate the tempo of matches. On Saturday evening, against Sydney, one of the best sides – and midfields – of the competition, Johnson did exactly that.

The Cat racked up 26 disposals, four clearances, five tackles, five inside 50s and kicked 4.3 in a fantastic display.

His ability to get the ball and find space at stoppages, as well as move forward and kick goals, has been outstanding this year. He is a deserved winner of the Player of the Week.

Riley Beveridge is a second-year Bachelor of Journalism (Sport) student at La Trobe University. You can follow him on Twitter: @RileyBev