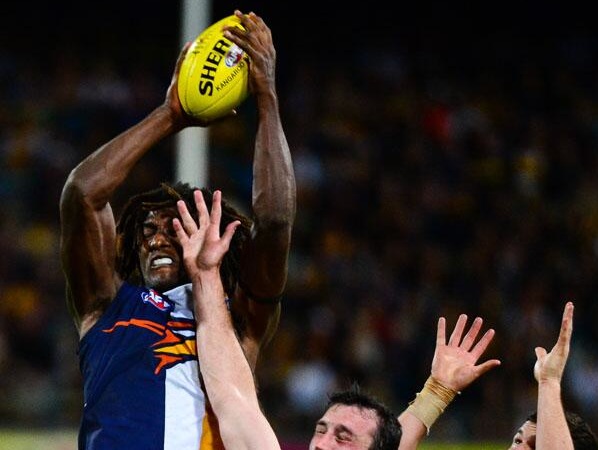 Nic Naitanui lived out a childhood dream on Friday night, goaling after the siren to hand West Coast a thrilling two-point victory over North Melbourne at Patersons Stadium.

The match will remembered for Naitanui’s heroics, but North fans were left fuming following a controversial free-kick paid against captain Andrew Swallow late in the match. From the resulting kick, the Eagles powered the ball inside 50 and Naitanui took an explosive pack mark.

The umpire may regret his words “high on the second tackle,” as replays showed there was no second tackle. Although, contact was initially made to the head of Selwood and a free-kick was seemingly justifiable.

North Melbourne should instead be more angry at the fact Naitanui was allowed an unimpeded run and jump at the footy, despite there being 36 men inside West Coast’s attacking half of the ground.

The defensive efforts weren’t good enough, and Naitanui made them pay.

In jumpers resembling those worn in Brisbane’s 2001, 2002 and 2003 grand final victories, the Lions turned back the clock to record a gutsy 10-point win over a lackluster Essendon side on Saturday afternoon.

Coming off the back of yet another demoralising defeat, the Lions kicked the opening three goals of the match to race clear of their much-fancied opponents.

Essendon lacked intensity, and despite recording a staggering 61 inside 50s to Brisbane’s 39, they failed to retain the ball through weak defensive efforts. Brisbane, on the other hand, pressured its opponent brilliantly and won the tackle count 72 to 49, highlighting the sustained efforts throughout the match.

Can this be the spark that ignites Brisbane’s fledging season?

Sam Reid took 11 marks in Sydney’s dramatic draw with Fremantle on Saturday night, none more important than his goal-saving effort in the dying seconds of the match.

Michael Johnson’s floating set-shot from just outside 50 could, and to Ross Lyon’s frustrations, probably should have been knocked through for a score to clinch the win. Instead, Reid flew and latched onto a superb contested grab to ensure a 70-all draw.

It was a tactically enthralling clash between the AFL’s two best defensive sides. Sydney, for the most part, controlled the match, and even led by 27 points at the 14-minute mark of the final term. However, three goals in four minutes for the Dockers completely turned the tide.

Suffering from injuries and suspensions, as well as coming up against the only remaining unbeaten side in the competition, Collingwood had its backs against the wall against Geelong on Saturday night. But, as the Magpies do best, they produced a courageous effort to down the Cats by six points in a fantastic contest at the MCG.

Collingwood made a fast start and led by 28 points in the second term, only for Geelong to weather the storm and make a superb comeback.

The Cats kicked eight goals to two in the third quarter to completely tilt the momentum of the match and take a 13-point lead into three-quarter-time.

It was just another setback that the gritty Pies side would have to overcome. They kicked the final three goals of the match – including Andrew Krakouer’s late match-winner from the boundary – to run out six-point winners and hand Geelong its first defeat of the season.

Player of the Week – Daniel Hannebery

Sydney’s Daniel Hannebery continued his fantastic season with another superb outing in the Swans’ thrilling draw with Fremantle on Saturday night.

These attributes were highlighted on Saturday night, with Hannebury racking up 27 disposals and five clearances, as well as moving forward and kicking four goals.