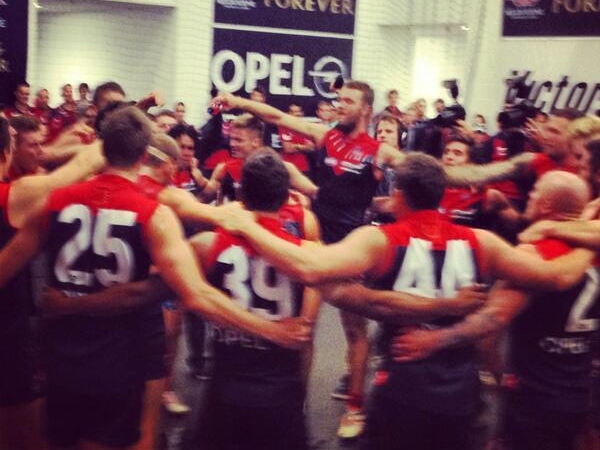 Geelong is the real deal… Richmond isn’t – yet

Geelong’s top four credentials were bolstered on Friday night after a riveting 21-point victory at the home of the reigning premiers, Sydney. Both sides were full of run early, with 15 goals booted in the first quarter alone. Geelong ended up grinding out their opponents, with Joel Selwood racking up 31 disposals and 10 tackles in a real captain’s performance.

The Cats continued to move as quietly under the radar as ever, while in contrast Richmond failed to live up to the nauseating hype against a rampant Collingwood on Saturday afternoon.

In front of 81,000 at the MCG, the Pies simply outclassed the Tigers. Despite holding a half-time advantage, Richmond couldn’t cope with Travis Cloke’s third-quarter heroics as their defensive deficiencies came back to haunt them. Alex Rance was monstered in the air, with Cloke booting four in the term and seven for the match as the Pies ran out 34-point winners.

Geelong and Richmond, as previously mentioned, are the polar opposites in terms of hype and anticipation. But at the moment Geelong, as they have so often when written off, continue to impress, while Richmond still looks a few years from their best.

Roos, Blues and Dees finally on the board

North Melbourne, Carlton and Melbourne are finally on the board for season 2013 after recording 0-3 starts to the year.

The Kangaroos were at their scintillating; fast-moving best in a 63-point win over Brisbane at Etihad Stadium on Sunday night. North raced out of the blocks and into a 32-point half-time lead before erasing any doubts of yet another third quarter fadeout by drilling seven goals to two for the term. Brisbane kicked some consolation goals late in the match, but it was a comfortable victory for the Roos.

Carlton finally broke its drought under Mick Malthouse with a gutsy 24-point victory over West Coast in Perth. Chris Yarran was brilliant with three third quarter goals to break the match open, before the Eagles staged a mini-fightback late in the term. However, the Blues held their opponents goalless in a brilliant final quarter display to claim their first win under Malthouse.

From the change rooms pic.twitter.com/XhiB7HcaxU

Meanwhile, Melbourne finally got some much-needed respite with a come-from-behind victory over GWS. It seemed as though the Dees’ season was about to go from bad to worse when they trailed the Giants by 19 points going into the last quarter, however a 12 goal last term was enough to change the tide and hand Melbourne a rare victory.

Hawthorn’s premiership ambitions may have taken a knock with key defender Ryan Schoenmakers ruled out for the remainder of the season with an ACL injury.

Despite a 42-point victory over Fremantle, the Hawks’ day was soured when the young defender went down in the second quarter. Ex-Bulldog Brian Lake is adequate cover for Schoenmakers, yet the veteran was brought in to help take the strain of Hawthorn’s tall backs, not shoulder all of their work.

Even though it’s early in the season, Schoenmakers’s injury could prove a detrimental factor for Hawthorn’s premiership ambitions.

It was one of the most anticipated debuts in memory, and it lived up to the hype when Sudanese-born Majak Daw goaled with his first kick of AFL football for North Melbourne on Sunday night.

Daw’s athletic ability was showcased by a strong mark over the back of a pack just 60 seconds into North’s clash with Brisbane. If you thought that raised the roof at Etihad Stadium, it was blown clean off when he went back and drilled the set shot.

However the party ended after just 19 minutes when Daw was involved in a serious head collision with teammate Ben Cunnington and was substituted out of the match.

Player of the Week – Travis Cloke

There’s no doubting that Collingwood’s Travis Cloke changed the game against Richmond on Saturday afternoon.

With Collingwood trailing at half time, Cloke bagged four of the first five goals of the third quarter to put the Pies well and truly in the ascendency.

He ended the game with seven goals, as well as 20 disposals and 14 marks in a match-winning performance.