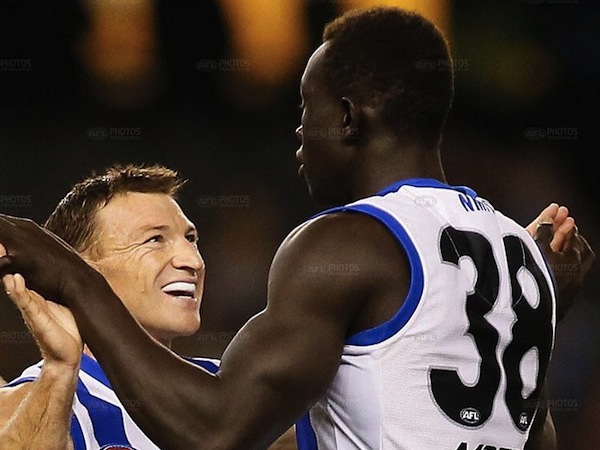 Geelong is now the only unbeaten team for season 2013, after defeating Essendon by 28 points on Friday night.

The Cats, once again led by their speedy and youthful midfield brigade, got on top of the Bombers in the second half, with a six goal to one third quarter putting the result beyond doubt.

With the likes of Steve Johnson (36 disposals), Matthew Stokes (24 disposals and three goals) and Steven Motlop (28 disposals) all winning the ball out of the middle, Geelong looks a top-four certainty and a genuine premiership contender.

Their stranglehold on the competition is immense. If they win a Saturday night showdown against Collingwood next weekend, they’ll strengthen their ambitions to make it four premierships in seven years and further entrench themselves as one of the greatest teams in the games history.

End of the line

Things just can’t go on like they are at the moment for Melbourne. Things have to change. A 60-point belting at the hands of Gold Coast on their own MCG turf quite simply is not good enough.

The type of humiliation Melbourne supporters are put through every week is now bordering on ridiculous. It’s no surprise there were more seagulls inside the MCG than fans.

It’s the end of the line for Mark Neeld. Although the football world feels for him and acknowledges the magnitude of the task he’s attempted to take on, he hasn’t been able to stamp his authority on the playing group. As a result, someone new has to come in.

Someone has to change the utterly disgraceful, lazy, shameful mentality of these Melbourne players, and Mark Neeld isn’t that man.

Majak hits the Dogs for six

Majak Daw took the competition by storm with his first mark and kick in AFL football against Brisbane, but in just his fourth game he showed his full capabilities with an outstanding six-goal haul against the Bulldogs.

The Sudanese-born forward/ruckman tore the Dogs to shreds and kicked 6.4 in a display that showcased his sheer strength and aerobic ability. As well as his six goals, Daw finished with 18 possessions and a game-high seven marks inside North’s attacking 50.

His potential has been hyped for years now, not just at Arden Street, but finally the 22-year-old has a performance to hang his hat on. With virtually no natural match-up for him in the competition, mark it down as the first big bag of many in what could be an illustrious career.

The wounds of 2012’s grand final loss still run deep at Hawthorn. However, a comfortable 37-point win over Sydney, the cause of last season’s agony, went some way to gaining redemption.

Luke Hodge also offered Hawks fans a thought of what could have been had he been 100 percent fit last year, racking up 32 disposals and 10 inside 50s in a clinical display.

The Hawks have now cemented their spot inside the top-four with what could be percentage boosters against GWS and Gold Coast in the next two matches.

An injury depleted Fremantle side withheld a late Collingwood fightback to claim a thrilling 27-point win on Saturday night.

Already missing Kepler Bradley, Aaron Sandilands, Zac Clarke, Nat Fyfe and Matthew Pavlich, the Dockers lost Stephen Hill prior to the first bounce, as well as having Jonathan Griffin go down with a season-ending ACL injury early in the first quarter. But they produced a scintillating first-half, leading by as much as 44 points midway through the second quarter.

Collingwood fought back and even hit the lead early in the final term, only for Fremantle to rally yet again, kicking the last five goals of the match to get home off the back of some spirited play.

The Magpies’ defeat leaves them teetering on the brink of being outside the eight, and they could still end up there if Carlton beats St Kilda in tonight’s fixture at Etihad Stadium.

Player of the Week – Tom Lynch

I can quite honestly say that I never thought I would be handing out my Player of the Week award to Tom Lynch. Out of nowhere, the former St Kilda forward bagged a stunning 10 goals against Greater Western Sydney as the Crows belted the AFL’s newcomers by 135 points at Skoda Stadium.

Lynch incredibly didn’t kick his first goal until midway through the second term, with a six-goal third quarter catapulting the 22-year-old on what will surely be his finest individual day in AFL football.

It may have been against GWS, but nothing will take away from a 10-goal match in which he also racked up 21 disposals and took 11 marks. Tex who?