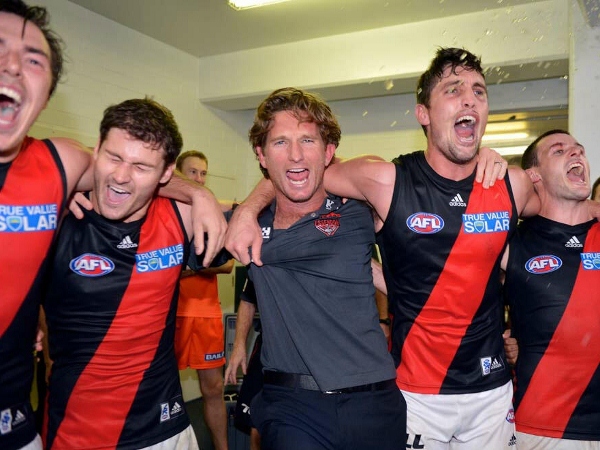 After one of the most turbulent and explosive weeks in the history of the Essendon Football Club, the Bombers managed a thrilling four-point victory over Fremantle in the most exhilarating contest of the round.

James Hird had endured a week where his credibility was questioned, as he was thrust into the limelight as the new ‘drug cheat’ at Essendon. Revealed text messages between he and Stephen Dank put forward the prospect of the Bomber great knowing about his players being injected, while exclusive stories suggested he himself was injecting illicit drugs.

On the field, having only kicked one goal and trailing by 36 points at half-time, you couldn’t blame pundits for thinking the strain of yet another week filled with drugs controversy at Windy Hill was finally taking its toll. But a seven-goal run to begin the third term put an end to the doubts, with Essendon managing to hold off Fremantle’s late forays forward to record a famous win.

It must have been one hell of a half-time pep talk from James Hird.

Q-Clash lives up to the billing

Brisbane held on for a memorable two-point victory over Gold Coast in the fifth installment of the Q-Clash on Saturday night.

Jonathan Brown was outstanding for Brisbane, kicking five goals in a match-winning performance and handing the Lions their first victory of the 2013 season.

In a seesawing contest from start to finish, the Lions looked to have sealed the victory when Irishman Pearce Hanley goaled with just two minutes remaining to restore an eight-point buffer for Brisbane. However, Michael Rischitelli soccered through an incredible goal with just under a minute left to ensure a tense finale.

The Suns won the centre clearance, however, couldn’t penetrate a packed Brisbane defensive 50 as the Lions held on by the skin of their teeth.

Hawthorn has sent out a premiership warning to its rivals, defeating Collingwood by 55 points on a rainy Sunday afternoon at the MCG.

Having come off a demoralising round one loss to Geelong, the Hawks have since backed up the defeat with convincing victories over West Coast at Patersons Stadium and Collingwood.

Hawthorn found themselves 22 points down midway through the second quarter, but a huge momentum shift, led by captain Luke Hodge and star forward Lance Franklin, turned the match on its head.

The Hawks booted 15 second-half goals to Collingwood’s six, with Franklin bagging four of his own, including an incredible major from 75 metres out after hurdling an opposition player.

Port Adelaide has started the season with three straight wins after recording a come-from-behind nine-point victory over their arch rivals Adelaide in the Showdown.

Forward Justin Westhoff sparked the comeback with two goals in a minute as the Power kicked 10 of 11 goals from the 13-minute mark of the third quarter. Westhoff finished the match with four, while Showdown Medalist Travis Boak kicked three from midfield in an inspirational performance.

Port stretched their lead to 25 points in the last quarter, before quelling a late Adelaide comeback to snatch their third win in as many games under new coach Ken Hinkley.

Player of the week – Jake Carlisle

The 21-year-old Essendon defender completed a stunning turnaround from potential trade bait to number one defender in the Bombers’ four-point victory over Fremantle on Friday night.

Not only was Carlisle’s defensive work exceptional, but he also racked up 18 disposals of his own and sent the ball inside 50 seven times in a coming-of-age performance.

With the margin of victory so small in the end, Carlisle’s ability to contain a champion of Pavlich’s ability was crucial to the Bombers recording their third straight win.