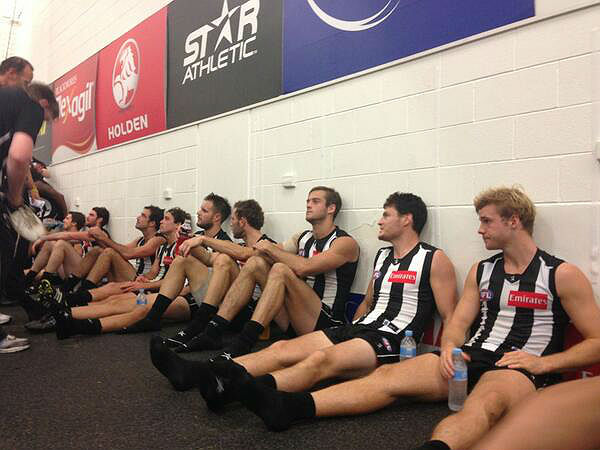 Bucks comes out on top

It was dubbed the battle of Buckley v Malthouse, but in the end a crowd of just fewer than 85,000 witnessed a hard-fought contest between two desperate teams, and Collingwood came out on top.

It was an enthralling match at the MCG, with inconsistent bouts of rain causing slippery conditions throughout the clash. Both sides showed courage in abundance, with all 44 men putting their bodies on the line. While the Blues may have edged the first three quarters, Collingwood fought hard and kicked eight of the last 11 goals to win by 17 points.

When push came to shove, it was a host of unheralded Magpies that carried Collingwood across the line.

Some tired but very, very pleased Collingwood players take it all in after the game #lovetohatecarlton pic.twitter.com/0cfvAXq3K4

20-year-old forward Jamie Elliott proved the unlikely hero for the Pies, booting five goals in the win. Quinten Lynch’s heroic effort in the ruck – forced by the absence of the injured and subsequently substituted Darren Jolly – was also outstanding.

The ladder continues to surprise football fans after round two. Port Adelaide sits in second position after another comprehensive victory, this time over GWS. Richmond fans are in a state of delirious joy, after their side went two-from-two on Friday night. The Tigers’ resilient 17-point win over St Kilda was on the back of a seven-goal haul from Jack Riewoldt.

Essendon, who had a tumultuous off-season, and Geelong, who many believed were on their last legs, are also enjoying a 2-0 start.

Meanwhile, the improving North Melbourne, the Mick Malthouse-led Carlton, the flag favourites West Coast and the NAB Cup champions Brisbane have all suffered two losses from their opening two matches to start the season. Not ideal by any stretch.

At least Melbourne is keeping us sane – two losses and a percentage of just 28.4 anchors them to the bottom of the ladder.

After watching Melbourne get thrown from pillar to post last week against Port Adelaide, I thought the only positive for Demon fans was that it could only get better – I was wrong.

A 148-point drubbing at the hands of Essendon highlighted their horrible attitude problems, their laziness, their astounding lack of effort and just about every other football-related flaw you could think of. For a side to lay only 35 tackles for the entirety of a match, it’s pathetic.

I feel for Mark Neeld – whose players looked disinterested and showed nothing for their loyal supporters – but you have to wonder if he’s responsible for his team’s performance. How long has he got until the Melbourne hierarchy assesses his position? It might be harsh – given he has only had a year to rebuild an utterly appalling squad and culture – but everyone’s positions, from the top to the bottom, need assessing.

While the majority of the football world was focused on what was going on across the road at the MCG, the contest between Geelong and North Melbourne at Etihad Stadium packed just as much drama.

Firstly, the roof issue. Yes, it rained. Yes, the roof was left open, but the ball was wet for Geelong as well. The Cats are an extremely good side in the wet – one of the best in the business – but they produced a 45-point turnaround to win the match. That, under rain, hail or shine, would be worrying for North Melbourne.

The 50-meter penalty awarded to Jimmy Bartel with 33 seconds to go ultimately won the game for Geelong, but was it warranted? Michael Firrito kicked the ball away after the umpire paid a free kick for holding the ball. It was a line-ball, split second decision. In the context of the game, it was too close for the umpire to make such a contentious decision. But if you’re being stringent with the rules, Firrito wasn’t in the motion of kicking when the whistle went. It’s a prickly situation, but who’s to say Bartel wouldn’t have nailed the goal from 30 regardless?

Player of the Week – Jack Riewoldt

After being held goalless in round one, Jack Riewoldt turned it on at the MCG on Friday night.

The reigning Coleman Medalist booted an incredible seven goals as the Tigers held off St Kilda to win by 17 points.

It was a stunning display by Jack – while his cousin Nick was amongst the Saints best, kicking four goals and racking up 20 touches.