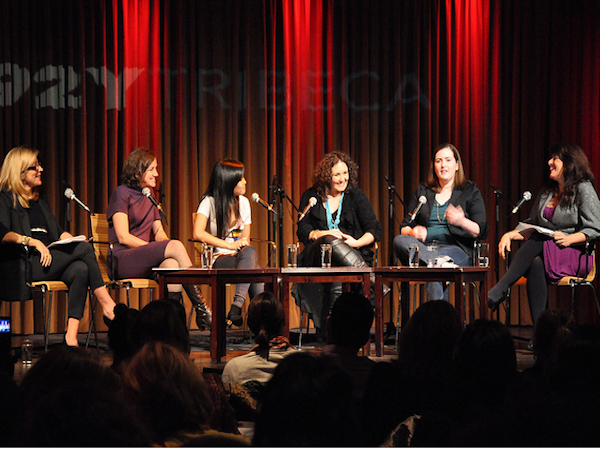 Gender equality has become a regular talking point in Australia’s political sphere, surfacing almost weekly in the media. The misogyny dispute even prompted a rewording of the term in the dictionary. But what exactly are these political debates teaching young women?

It is not educational for students to hear continuous analysis of Julia Gillard’s misogyny speech accusing men of sexism, nor is it didactic to learn what Abbott’s view of “women of caliber” entails. What young women do want to know is how to make a difference in their community and have the chance to achieve their dream career regardless of their gender.

Left Right Think-Tank is Australia’s first independent, non-partisan youth-led organisation, and has made it its mission to inspire young women through one of Australia’s largest young women’s empowerment events, HEELS.

Helping Education & Empowering Leaders in Society is an event that aims to empower, encourage and inspire confidence in young women to become involved with and strive to lead in the media, government, business and the broader community at large.

But has the feminism battle already been won?

Many women currently don’t associate with being a feminist. A study conducted by YouGov found that only 28 per cent of women consider themselves a feminist and 20 per cent believe feminism is no longer relevant. Women have achieved equality in many areas that 50 years ago would have seemed unattainable – with the election of a female Prime Minister being a notable example.

But according to the 2012 Australian Census of Women in Leadership survey, only nine per cent of executive positions among the Australian Stock Exchange’s Top 500 companies are held by women. Of the 500 companies surveyed only a mere 12 had a female as the CEO.

These statistics suggest as long as the majority of positions of power in education, business and politics are still occupied by men, the feminist fight is not over.

Meabh Loughnane is the Communications and Events Manager of HEELS and has put her blood, sweat and tears into creating a platform that celebrates the involvement of young women in the community.

“As generation Y we’re often being accused of being disengaged, apathetic narcissists, this is simply not the case. There are so many young people who are passionate and this event hopes to nurture and inspire confidence in these people to lead with hard heads, soft hearts and young minds,” said Ms. Loughnane.

HEELS will be a one-day networking conference featuring a panel discussion, question and answer session and networking lunch with successful female leaders Stella Young, Jamila Rizvi, Susan Carland, Penny Williams, Samah Hadid and Viv Benjamin. This event will provide a platform for young women to access and experience advice and support from females who have already achieved leadership roles in the community.

The event aims to get the message across to disadvantaged students who otherwise would not have the life-altering opportunity to be inspired by these stories – such as how Penny Wiliams became Australia’s first global ambassador for women, or how Viv Benjamin has made a significant impact fighting extreme poverty with the Oaktree Foundation.

Ms. Loughnane suggests it is imperative that people from underprivileged upbringings also receive this awareness.

“It’s important that young females from disadvantaged backgrounds whether that be indigenous women, refugees, disabled women or women from low-socio economic circumstances aspire for leadership roles and be inspired and empowered by female leaders,” she said.

Ms. Loughnane understands that feminism strings from a complex historical, societal problem, but believes that the long-term solution involves educating and inspiring students while they’re young – which is exactly what she plans to do. She hopes that achieving the objective of women in position, politics and power will soon be a reality, rather than an ambition.

Bridget Rollason is a Bachelor of Journalism student and a member of the upstart team. You can follow her on twitter @didgereidoo.