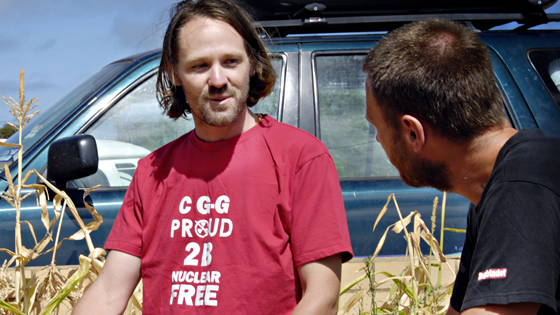 While most people felt the pinch when the global market collapsed, it made plans extremely difficult, if not impossible, for some families in Western Australia, who were trying to establish ecovillages to create a more sustainable lifestyle. Nervous banks either denied or withdrew support from what they thought was too experimental in an unstable economic climate. We look at two struggling projects, the Geraldton Urban Ecovillage and Somerville Ecovillage, near Perth.

In Geraldton, Ben Clarke and Laura Fewster show us the site of what was once planned as a groundbreaking urban development in remote Australia; a high-density ecovillage within walking distance of the town centre. But despite their planning efforts and good local support, their dream looks impossible to realise in the current economic climate.

In the offices of GreenEdge Projects in Chidlow, we meet Dom Carlino and his wife Vida. GreenEdge is the driving force behind Somerville Ecovillage, and they also took part in the planning process of the Geraldton project. Along with Robyn Antonelli, Dom and Vida started the innovative property development company back in 2003. That is, they had worked together for some years already, but in 2003 they formalised the company.

‘A few years ago it was really only part time work, trying to help Somerville push forward,’ says Dom.

‘We never ever thought we would be able to create a business or a living out of what we do. We thought we were doing this Somerville because that’s where we were going to live.’

Having traveled extensively, looking at around 60 ecovillages and intentional communities around the world, the trio had gained so much insight into what it meant to a green community, and they had learnt so much about the process that they wanted to share this knowledge and help others in their strife.

‘It’s like what Max says – Max Lindegard from Crystal Waters in Queensland – it’s all about standing on each other’s shoulders. Everything that we learn and the models that we have used, we are able to teach somebody else,’ says Vida.

The vision was simple: they aimed to develop community groups that brought people together, building sustainable homes, reducing the carbon footprint – living and leading as an example. Bringing the vision to life was another story entirely.

Somerville ecovillage was going to be a life-changing project, not just for them, but for tens of families who invested money and time on getting the project off the ground. It would take around $8 million and a lot of hard work.

The project developed. Interest increased, more people became involved in Somerville. Permits were sought, plans were drawn up, they applied for funding. In 2007 the bank came through, in 2008 the building plans were approved… and then came the GFC…

Hope and positive outlook was replaced with a nasty financial battle to get the bank to stick to their agreement.

‘We have definitely been through the wringer with the bank,’ says Dom.

‘As far as the development of Somerville goes, there has been no progress since your last visit [in 2009]. The development is up for sale – by St George Bank who has taken control of the assets.’

Three years on, the approvals are still in place and the project could still proceed, but Somerville ecovillage is well into the 11th hour of its fight for existence. Unless the financing issues will be resolved soon, the approvals will lapse.