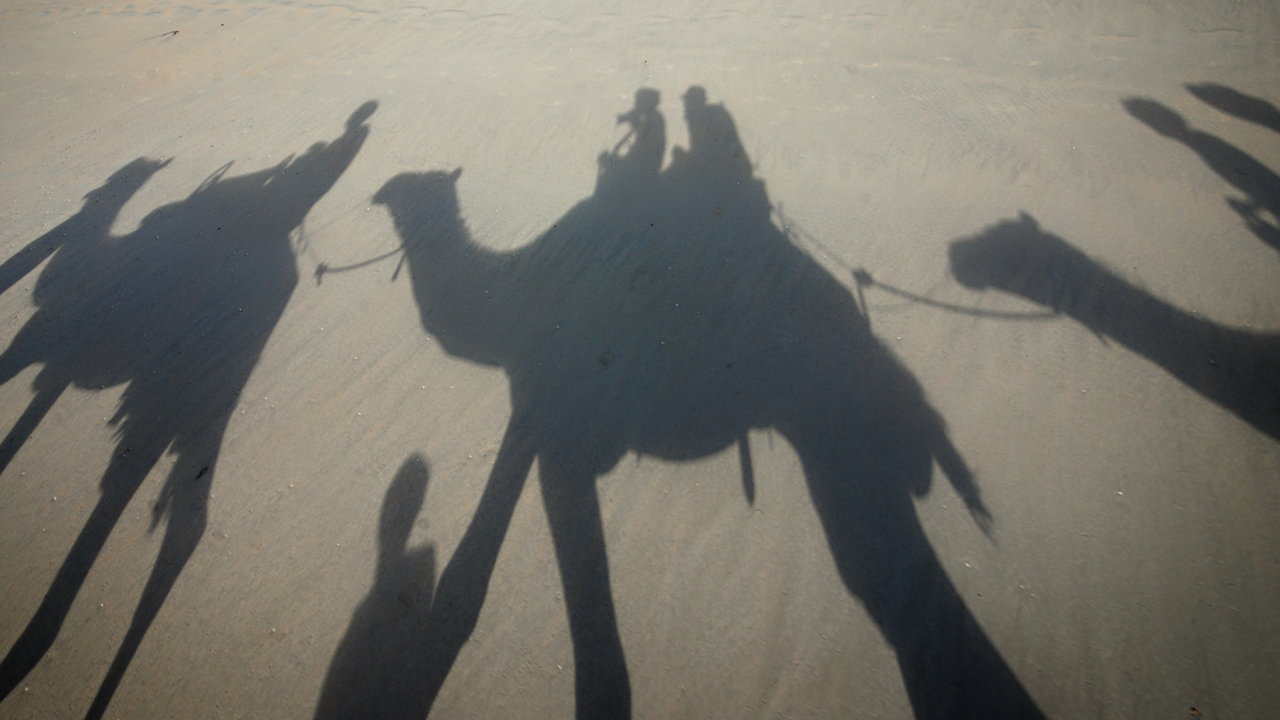 TIS pt. 8 | The road from Darwin to BroomeTHUMB

The week between Christmas and New Year’s Eve was something of an endurance test for us, as we drove more than 2,000 kilometres in three days, through some of the most spectacular landscapes that Australia has to offer. We met local bull enthusiast Tex Kitchen at Willare Bridge Roadhouse. And as we finally arrived in Broome we finished the year on the back of a camel, as we searched the desert for 120-million-year-old dinosaur prints.

See photos from the road here.

The lake may be under-used by people, but freshwater crocodiles love it here. It has the highest density of freshwater crocodiles anywhere in Australia. Apparently these beasts are safe to swim with – and the lake certainly looks like the perfect place for a dip. We are carefully reminded (twice!) by the official Lake Argyle website that ‘swimming in Northern Australian waterways is totally at your own risk’. And, if you’re really unlucky, there could be a saltwater croc or two hiding amongst their more humble relatives.

Between Darwin and Broome, entire townships had shut down between Christmas and New Year’s Eve.

Entering Broome was something entirely different. This is tourism central, and apparently the population almost triples here during tourist season. Seeing as we were having something of a holiday while in Broome, we wanted to do something really touristy. We opted for the camel safari, which isn’t as exotic as it sounds.  We sat on a camel, on a beach, for about fifteen minutes in nice and hot weather.

See our photos from our Broome “holiday” here.

As mentioned in the episode, Australia’s wild camel stock has grown, and many regard it as a threat to the fragile inland ecosystem. There have been two main suggestions as to what can be done in terms of culling the population.

One proposal, by then Prime Minister Kevin Rudd, suggested launching an air strike against this unnatural enemy. Outrage rippled at the suggestion, both at home and across the sea. In the US, CNBC’s Erin Burnett, most famous for her market reports, lashed out at Rudd, calling him a serial killer on live television.

Then of course, there was the other option of making camel meat more accepted in Australian households.

You can read Eirik Laugerud’s take on the camel’s place in the Aussie cuisine in his blog Don’t smoke the camel, eat ’em!

And if you want more in-depth information about Australia’s issue with the ‘feral ships of the desert’, read Nicholas Rothwell’s article No country for old camels.

Beyond being one of the Top End’s major tourist machines, Broome – and more specifically Cable Beach, on which we were sitting on these camels – has had a particular historical significance for Australia. This very beach was the point from which, in 1889, Australia was first connected to the rest of the world; with an underwater telegraph cable to Java in Indonesia.

The white sand beach stretches 22 scenic kilometres, and the sun dips into the ocean every night. It looks perfect for a swim, but then again, like with the inland Lake Argyle, there are dangers that keep you from jumping in.

Between November and April there are small, yet very deadly, box jellyfish present around the coast, and of course there may be saltwater crocs.

Still, people do seem to enjoy the beach life in Broome, and there are still a few daredevils that venture into the water. Additionally , for the keen public exhibitionist, the north side of Cable Beach offers Australia’s most famous nudist beach. Speaking entirely for myself here (and not the rest of the crew), it’s probably more likely you’d find me in the water than sprawling on the north side.