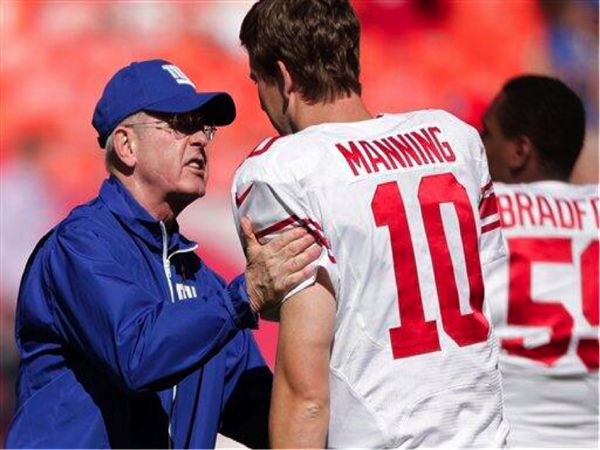 They are American football’s first family.

The Mannings – first patriarch Archie, then sons Peyton and Eli – are arguably the most recognisable name in NFL football today.

Peyton is regarded as one of the best, if not the best quarterback of all time. A quick scan of his achievements reveals a staggering list, including a Superbowl ring with the Indianapolis Colts, 12 Pro Bowls and four league MVPs. He is also the all-time franchise leader for total yards gained at the Colts.

Due to unfortunate neck injuries, and several corrective surgeries, Peyton was released a year into his $90 million – five year – contract with Indianapolis in 2012, and he signed with the Denver Broncos as a free agent.

Younger brother Eli doesn’t boast as storied a career as Peyton, but wears two Superbowl rings – both won against New England Patriots legend Tom Brady. The Giants have been perennial threats while Eli has been at the helm.

However, 2013’s NFL season has revealed a staggering gap between the pair.

Peyton’s Broncos are 6-0, and have outscored their six opponents by over 100 points. They’ve scored 265 points, at an average of 44 points a game. That points total is the most in the history of the NFL over six games.

He threw two touchdown passes in Denver’s win against Jacksonville. Prior to that, he had 20, over five games, which was again the most in NFL history. In six games this season he’s only been intercepted twice.

After the Broncos beat the Cowboys in a shootout, 51-48, and Manning threw for 414 yards and four touchdowns, he passed Dan Marino on the all-time NFL yardage list. He’s now in second place, with 61,371.

Even more impressively, Peyton has done all this largely without throwing long passes. Injuries have affected his ability to throw the deep ball.

His receiving corps at Denver includes former New England receiver Wes Welker, who has the luxury of upgrading from Brady to Manning. Welker thrives on short passes that build yardage, and this complements Peyton’s style of play perfectly.

Big, physical receivers like Demaryius Thomas, Eric Decker and Andre Caldwell, as well as developing tight end Julius Thomas round out the targets. It took the best passing performance of Dallas Cowboys quarterback Tony Romo’s career to come within three points of Denver – nobody else has looked like beating it at any stage so far this season.

Meanwhile, the Giants and little brother Eli sit rooted to the bottom of the worst division in the NFL. Having failed to win a game so far this season, Eli is copping the brunt of criticism for the poor performances.

In the six games this year, Eli has thrown as many interceptions (15) as he did in the entirety of 2012. Against the Chicago Bears in week six, he threw two interceptions in his first two offensive drives. One was returned for a touchdown. He has thrown at least one interception in every single game so far this year.

In an embarrassing display against the Carolina Panthers, where the Giants were routed 38-0, Eli was sacked seven times and threw an interception. It was the greatest win in Carolina’s history, points-wise, and the largest loss of Giants coach Tom Coughlin’s career.

How would you #CaptionThis photo of Eli Manning and Tom Coughlin? Best ones get read later in the show! pic.twitter.com/MnicOVfDrG

While there are currently massive gaps between the brothers, it’s important to consider why. Peyton has 22 touchdown passes and two interceptions because he doesn’t give opposition defences many chances to intercept the ball. He throws short and often to receivers well drilled on their routes.

Eli suffers from a result of a weakened offensive line. The guys that are supposed to protect the quarterback are either injured and have rookies starting in their place, or are suffering the worst season of their careers.

Where Peyton has Welker, Thomas, Decker and Caldwell to throw to, Eli has virtually no tight ends and only two receivers physical enough to make plays in Victor Cruz and Hakeem Nicks. The latter struggles with injuries, yet is the second-most prolific receiver on New York’s offence.

The fortunes of the Mannings are staggeringly different. Both would have come into the season expecting to make runs at the playoffs and ultimately the Superbowl. For Peyton, a guaranteed Hall of Fame player, a second ring with Denver at the age of 37 will almost certainly cement him as the greatest quarterback of all time.

For Eli and the Giants, it seems playoffs are no longer an option. Instead, the younger Manning must live in his older brother’s shadow, and – with the results he has produced so far this season – fight for his job as the quarterback in a town that demands results.

Jordan Witte is a second-year Bachelor of Journalism (Sport) student at La Trobe University. You can follow him on Twitter here.