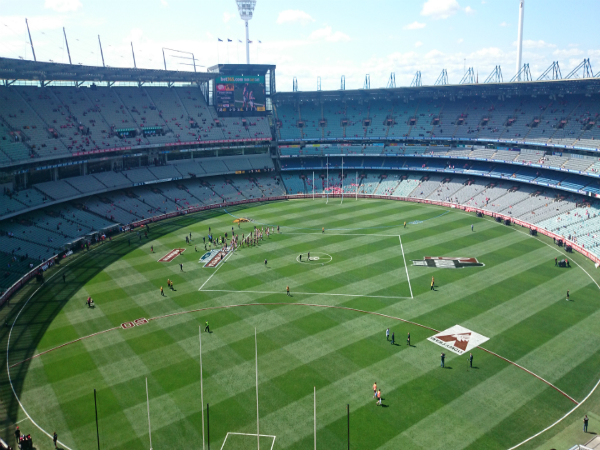 Tactics have had to adapt and evolve through gameplay and strategies of competing teams.

More time is spent at training, developing and mastering on-field strategies, and coaches are constantly looking for ways to revolutionise the sport and find a game plan solid enough to reach the finals.

With the increased frequency of the new high-half forward, positional play is not as common as it has been in past eras.

The high half-forward acts as an extra midfielder and is tasked with following the ball up the ground whilst also taking the time to rest in the forward line. Port Adelaide’s Robbie Gray best personifies this position, having averaged 25 disposals a game and kicking 42 goals in the 2014 season.

Ross Henshaw–a two-time North Melbourne premiership player in the 1970s–tells upstart that when zones are used and players disregard positions on the field, it denies fans the chance to see traditional one-on-one contests.

“The era I played in probably up until the ‘90s you had to beat your man to get the ball. Player’s just aren’t as accountable now,” Henshaw says.

“The way that the game is played now it’s like glorified circle work, where a team will bring the ball around one side of the ground and then the opposition will bring it around the other.”

Circle work is a training drill whereby, as the name suggests, the ball continues to be kicked and handpassed around in circles with players ignoring positions to simply follow the ball. Key footballing aspects such as scoring and contests are omitted from the drill and thus the fact that elements of circle work are slowly creeping into matches worries fans and ex-players alike.

Significant criticism also surrounded the “rolling maul” last season, whereby a disregard for positions led to players converging on one area of the ground and play becoming quite congested. Repeat stoppages would follow, making the feel of the game more akin to rugby as opposed to the usual expansive style of AFL.

Free kicks are one way of reducing stoppages and thus the AFL has altered the interpretation of the holding the ball rule for the 2015 season. Under the stricter interpretations, players will be penalised if they have reasonable time, try to evade a tackle or choose not to dispose of the ball. Higher leniency was given to players in the past but the AFL hopes an increase in free kicks will help to spread the games and create a more attractive manner of play.

An interchange cap of 120 per match was also introduced before the commencement of the 2014 season in the hopes of opening up matches. Recently, however, former Brisbane Lions captain Jonathan Brown has called for this number to be halved.

“The game needs to go back to 60 or 80 [interchanges], I believe, because we need to tire out sides and their ability to defend or to chase and tackle. That’s the way we open the game up,” Brown told the Herald Sun.

“We would see more one-on-one contests in the forward 50.”

Still, a drastic drop in rotations may not be an all-encompassing solution.

The increase in fatigue could instead lead to more congestion as players try even harder to lock the ball up and reduce running.

Heading into the 2015 AFL home-and-away season it will be interesting to see the manner in which matches are played. Whilst providing some close encounters, most games in the 2015 NAB Challenge were not free-flowing and it resulted in many low scores.

Sides scored above 100 points on only ten separate occasions out of the 27 matches, and Richmond v North Melbourne was the only game which saw both teams exceed 100 points.

FT: North wins! A 14 point victory over Richmond to round out the #NABChallenge pic.twitter.com/irWGU4tXsc

If these preseason scoring figures are any indication, another highly congested and contested season awaits in 2015.

One thing is certain: the game will continue to evolve. Whilst a quick fix for the current style of gameplay is unlikely, perhaps the evolution will become a devolution, resulting in a return to the open, one-on-one football of old.