Mark Twain once said, ‘Get a bicycle. You will not regret it if you live.’ It’s a sentiment echoed by Melburnian cyclist Jordan Wood. ‘It’s such a cool, easy and economic way to get around,’ she says with a grin. ‘And I think that whole negative connotation of a cyclist being some dorky, flouro-wearing speedster is over now. Lots of people, especially in Melbourne, see cycling as a way of life.’

Wood couldn’t be more ‘Melbourne’: a mid-20s Fine Arts major who loves indie music and every exhibition under the sun. Her ‘ugly, old lady’s’ bike enabled her to attend any event or class with a minimum of fuss – until it was pinched. ‘She was my baby,’ she says with a wry smile. ‘She was the ugliest thing in the world and I loved her.’ After wishing many bad things on the thief, she brushed herself off and asked the question: what else is out there? 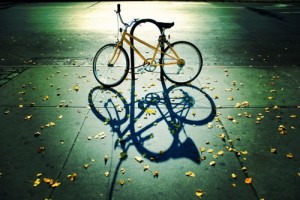 On a student wage, buying a new bike was out of the question – and that’s where the Melbourne Bike Share program came in. ‘It was great to know I had another option rather than forking out,’ she explains, ‘and although I can’t ride my favourite bike path with it [Merri Creek], I can get to anywhere in the city without a drama.’

Melbourne Bike Share, an initiative launched by the Victorian Government and operated by RACV, was launched this May. Bike pods, located at various points around the CBD, allow cyclists to hire a bike from one pod and drop it off at another. With 50 pods now in operation and over 600 bikes in total, the CBD is becoming a bike lover’s dream. It’s the first bike share system to be launched in Australia and, despite a wobbly start, RACV’s General Manger of Member and Motoring Services (and overseer of the Bike Share program), Gordon Oakley, couldn’t be more pleased.

‘The fact we’ve had such a wet and cold winter has been difficult,’ he acknowledges with a chuckle. ‘But take-up has trebled since our first month so we’re pretty happy with the message now. Our plan was always to start marketing in September because of the warmer weather.’ Which absolutely makes sense, considering cycling is, at its base, a highly seasonal sport. ‘I’m a really keen biker and even for me it’s been difficult to get up in the morning and get on the bike,’ he admits. Another mitigating factor has been the mandatory helmet law in Australia, which raises the question: why would someone carry around a helmet if they didn’t have a bike? ‘It’s raising awareness of the program,’ he shoots back. ‘It’s a bit of a culture shift for people… when I’m going into the city, I just clip my helmet to my backpack, so I’ve got it if I need to ride around.’

Whether or not the scheme will end up being successful, Oakley remains optimistic. ‘Partnership with the cycling culture that Melbourne has has been so rewarding,’ he says. ‘We’ve got one guy who’s designed an iPhone app that provides an update of where all the bikes are – and this guy doesn’t even work for us, he just did it because he loves [the idea]. So there’s so much goodwill out there.’

The program is ideal for a relatively flat and condensed CBD such as Melbourne, but what if you want more freedom with your ride, say Wood’s beloved Merri Creek path, or a longer time-frame than the two-hour Bike Share option? There is, of course, regular bike hire. Tourist trap Southbank is teeming with bike hire joints designed to woo the traveller’s dollar (or Euro, or Yen), but for something a little off the beaten track there is Humble Vintage, a bike hire outfit all about preserving Melbourne ‘cool’: bikes are vintage and oh-so-hipster. Manager Matthew Hurst stumbled on the idea almost by accident. ‘It started just by collecting bikes, then it became commercially viable to actually rent them out,’ he divulges with a wink. And as well as staying true to Melbourne’s retro obsession (Hurst labels modern bikes as ‘ugly and not cheap’), he claims that they’re easier to ride. ‘With the wide handlebars, and you sit up much higher – they’re much cruisier,’ he explains. With a day hire setting you back $30 it’s not an everyday option, but is certainly something you can do once in a while. And when coupled with the extremely competitive Bike Share rates (an annual subscription is only $50 and the daily is a mere $2.50), any discerning cyclist can see that being deprived of a bike doesn’t mean being deprived of the bike riding experience.

It’s an experience that Wood is keen to continue. ‘I used to hate to think of myself as a “cyclist”,’ she laughs. ‘But now it’s something I love. It’s not just a nice way to get around. It’s a nice way to spend an afternoon.’ And with the summer months now upon us, there’s more reason than ever before to get on your bike, so to speak. Mark Twain almost had it right – not only will you live, you’ll wonder how on earth you lived before.

Renee Tibbs has just completed the Graduate Diploma in Journalism and is the current editor of upstart.

For another perspective on the Melbourne Bike Share program, check out Sofia Monkiewicz’s article here.