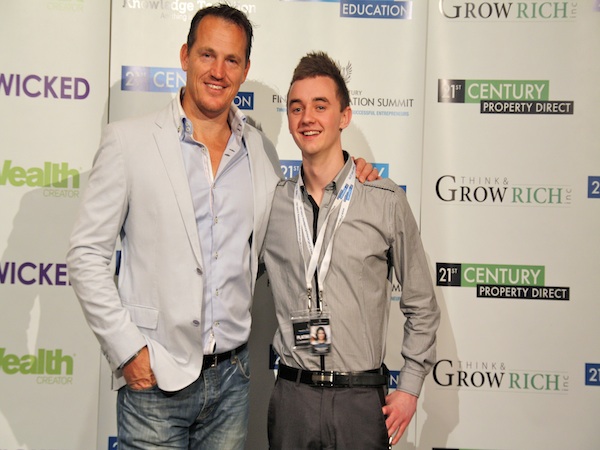 Brentis Cooper, a 19-year-old La Trobe University student, comes across like just another teenage university student. But, away from lecture theatres and tutorial assignments, he’s the business mind behind successful Australian company ‘the apps crew’. Also, he’s one of the world’s top 40 young entrepreneurs.

Upon meeting Brentis, I envisioned he’d be a little geeky, studying IT and creating apps for a hobby. However, I was pleasantly astounded by who I had the honour of meeting.

Brentis looks like any regular 19-year-old university student whose hobbies include fitness and technology. But, his attitude and persona, elicits the knowledge and confidence of a businessman with a lifetime of experience.

I was immediately intimidated by the oozing self-assurance of this young man, so much so that I’d briefly forgotten the questions I had planned to ask. Luckily, Brentis had already covered his road to success in the first five minutes of our meeting.

From a young age, Hamilton-raised Brentis had the knack for business, launching his first online company at age 16.

“I was teaching guitar at thirteen, and buying and reselling instruments from the Internet at 14. When I was 16 I really loved fitness and saw the opportunity to import protein substances from America and sell them here, but I thought I’m only 16 I can’t do that.”

But with his mum’s new partner having a keen interest in business, Brentis finally had the motivation to create his own industry initial. And while his first endeavor proved unsuccessful, it gave him the learning process and skills required to invest his time into a new trade.

“The year after I started a business called The Think Big Business Academy, which was aimed at supporting young Australian entrepreneurs. That flopped as well because it turns out there’s not a whole lot of kids that knew they wanted to be an entrepreneur from a young age.”

After experiencing more adversity than triumph, Brentis applied for a competition in the United States, headed by Peter Thiel, the main investor of Facebook. The competition set out to find the top 40 young entrepreneurs in the world. After spending two months on his application, he was deemed worthy and was flown to San Francisco for the chance to win a $100,000 grant to start his own business in California.

However, Brentis was knocked back again. So this 17-year-old entrepreneur landed himself back in Hamilton to complete year 12 with a great deal of knowledge and experience.

But it was shortly after this that he struck success with his current business ‘The apps crew’.

“The apps crew builds apps for iPhone and android. Clients come to us with an idea and we build it for them.”

Despite working from his college dorm at La Trobe University, Brentis regularly communicates with his business partner in Sydney. And while the company is only 12 months old, the pair plan to expand it across ten different countries in the next year alone.

“I sort of have a higher vision than just building apps, I’d like to think I will have built this company up to be fairly big so I can earn quite a large income and use that to build world changing things. I’d like to eventually live in San Franciso, because every second person there is trying to change the world with crazy ideas.”

While Brentis has now been recognised for his achievements, finding motivation and incentive to continue after his several failures has come from acknowledging these.

“I get most of my inspiration from non-fiction books about personal growth and self-cultivation. Although it sounds cliché, that is where 80 per cent of success comes from.”

It then made sense – why this young man possessed the positive attitude and confidence he does despite multiple letdowns.

“I’ve given speeches to the board of directors at RMIT on motivation. Even if you’re not an entrepreneur and you want to achieve anything in life having the right mindset is absolutely crucial.”

After speaking with Brentis for a short time, I felt that I was ready to take on the world – radiating inspiration and roaring with confidence.It’s no wonder this young entrepreneur has succeeded in turning his business dreams into a very successful company, and I am sure this is just the beginning.

Bridget Rollason is a Bachelor of Journalism student and a member of the upstart editorial team. You can follow her on twitter @didgereidoo.