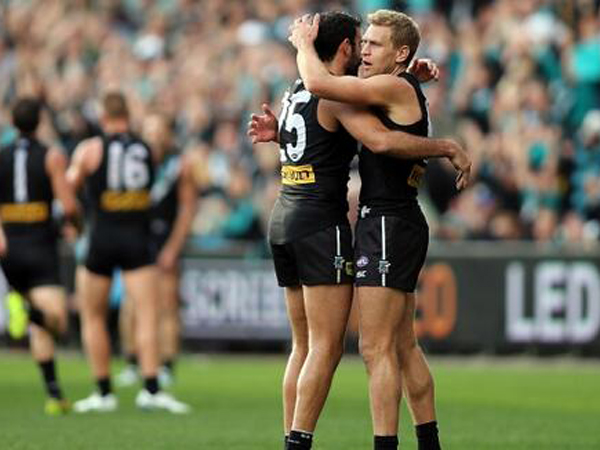 It’s September 7, 2013, and the Collingwood Magpies are raging favourites to beat Port Adelaide in the second elimination final at the MCG.

Nobody has tipped the Power, but they led at every break.

Ken Hinkley’s side emerged victorious and in an unbelievable turnaround, they win a final in the same year they were short odds to finish bottom four.

Now fast forward to April 27, 2014, where the Power dismantle the unbeaten Cats at home by 40 points.

Fast ball movement, smart forwards and a list that boasts elite endurance have elevated this Port Adelaide outfit to top of the table at the first interval of the season.

And once again, nobody tipped them.

It is hard to believe that Hinkley has been in charge of this team for only 32 games. It is even harder to believe it took him so long to get a senior coaching role. St.Kilda, Western Bulldogs, Melbourne, Brisbane, Richmond and GWS all had genuine opportunities to acquire him.

Hinkley’s positive influence was made apparent during his time as Geelong assistant coach during the 2007 and 2009 premierships under Mark Thompson.

He then joined the Gold Coast Suns as an assistant coach, before finally getting his chance with Port Adelaide for the 2013 season.

Since his arrival he’s done everything right in such a short amount of time.

The recruitment during last year’s trade period was exceptional – Matthew White from Richmond has made a big impact playing wing and half forward. Ironically, Tigers fans didn’t complain when he left, now they are left scratching their collective heads as to why he was ever released.

The other big signing was Jared Polec from Brisbane. The former number five draft pick was tossing up between the Power and the Crows, and he ended up in black and teal. Polec has excelled and has shown the makings of an elite midfielder, with awesome skills and pace.

The recruitment of Darren Burgess as head of fitness is another big tick, which has seen big rewards.

The fitness ‘guru’ had previously worked with the Socceroos and with Liverpool, before being persuaded by Hinkley to come to Port Adelaide.

In the off-season, the Power squad travelled to Dubai and Burgess pushed them to the absolute limit.

“That was the hardest nine-day period I’ve ever put a team through,”said Burgess.

Since being in charge of fitness at Alberton, Port Adelaide lead the AFL for winning after being behind at three-quarter time. They have done this five times in addition to winning the most fourth quarters this season.

They are now regarded as the fittest team in the AFL.

The result is a fit midfield that continuously finds another gear and is able to provide the forwards with quality supply.

Jay Schultz, Justin Westhoff, Robbie Gray and Chad Wingard are all flourishing at the present time and have elevated the Power into one of the most potent sides in the competition.

Only Hawthorn have scored more points than the Power this season.

Kane Cornes is the sole player remaining from Port Adelaide’s first and only premiership from 2004. He is the odd man out now, in a surprisingly young midfield; Travis Boak (25 years old), Robbie Gray (25), Hamish Hartlett (23), Brad Ebert (23), Jared Polec (21) and Ollie Wines (19) are all in the club’s top ten ball winners. In fact, only the expansion teams of Gold Coast and GWS have younger lists.

The improvement is only going to continue and it is a frightening prospect.

Ken Hinkey’s men are a little over four months away from completing one of the greatest 24-month turnarounds in AFL history.

Josh Schonafinger is a student at La Trobe University, currently studying Bachelor of Journalism (Sport). You can follow him on Twitter: @joshschon.