From Nat Fyfe to LeBron James, star players are often used to represent their team or league. 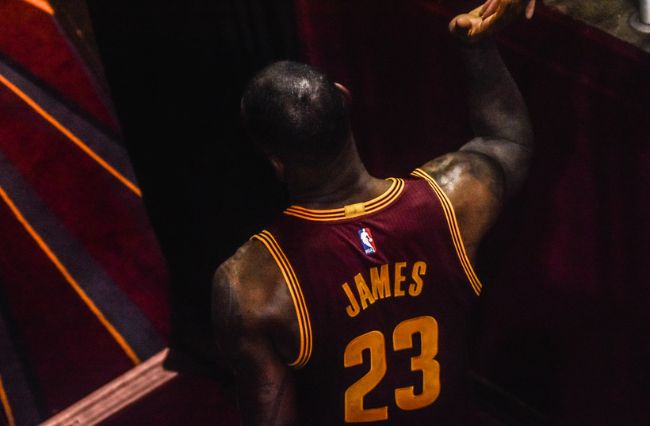 When LeBron James first started playing for the Los Angeles Lakers, rather than hearing the usual “King James” cheers he was used to, the crowd would often rain down chants of ‘Kobe, Kobe, Kobe.’

LeBron joining the Lakers was one of the biggest moments in franchise history, however, some protective Lakers fans felt the need to remind LeBron of the identity the team had already established. The Lakers were Kobe Bryant’s team, and always would be.

Why are fans so protective of their club’s image and identity, and how does it become tied to its star players?

Fremantle Football Club’s Brand and Marketing leader, Meghan Hughes tells upstart that it comes down to our desire to be a part of a something bigger than ourselves.

“I think a lot of that identity becomes wrapped up in the team’s captain and the kind of character that they come across as.”

Many teams will use their star players to represent the franchise and be the face of the community to lure fans in. This year, Fremantle captain Nat Fyfe recorded a video message urging supporters to be a part of the Dockers community by renewing their membership.

“For an unrenewed member, the hook that we’re trying to get them in with is that sense of community,” she says.

Hughes believes the fact that Fyfe represents Fremantle on a national stage makes the fan feel a special connection to that player.

“I think people in Perth feel like we’ve got small town syndrome. We get forgotten about all the time, then we see him [Fyfe] on a catwalk in Melbourne or something and they’re like, ‘oh he’s local. I could run into him at a coffee shop and he’s the captain of my team’. It makes them feel local but also more important on a bigger lens,” she says.

Fans of teams from smaller towns, often feel an even greater sense of connection to their teams, as they feel a part of a more exclusive club compared to larger clubs.

With the increase in fan engagement across the use of social media, players are given more freedom to express themselves, giving them more opportunity to showcase their personality and character. Hughes believes athletes need to present themselves in a positive way so that fans are proud to identify with that club.

“I think becoming a hero nowadays has more to do with what you do off the field rather than on the field.  How do you manage your socials? How do you build your brand as a player?  What charities and brands are you collaborating with? How do you treat the media? With cancel culture at the moment, you can be cancelled so quickly,” she said.

However, Dr Stephen Mumford, a philosopher of sport from the University of Leeds, believes it can be dangerous to have the identity of a club wrapped up under the character of a single player.

“Tiger Woods was one of the most admired athletes in the world until stuff came out about his private life.  If I was a professional athlete, I wouldn’t want anybody judging me by what happens outside of sport,” he says.

“Ideally, you’re going to admire people for their sporting prowess. And so, the danger is… say something comes out about their personal life then that allegiance could suddenly evaporate.”

Dr Mumford believes that athletes are more vulnerable to making poor choices than the everyday person due to their celebrity status.

“These are often very young people. They have far more diversions and temptations than we do,” he says.

Whether using a single athlete to represent a league or club is a positive thing or not, there is no denying that it’s a successful way to capture fans. The NBA for example is notorious for using a star like LeBron James to draw fans in.

Dr Mumford believes that this may be due to a different type of fandom.

“It’s a very different kind of relationship from being part of a community,” he says.

So, what does Dr Mumford believe would motivate a fan to cheer for a single player rather than a team?

“I think there’s a very different kind of relationship going on there.  It might be admiration.  [They] can bask in the reflective glory of when he does well,” he says.

“If it is in the context of a team game, I think it’s quite bad.  For people who understand the sport, they know it’s not about the individual, it’s about the team.”

However, marketing and content manager for the NBL team Melbourne United, Laura Perrett, says that individual stars being the sole promoter for their team or sport is now part of the job.

“By becoming professional NBL players, the guys must commit to building their personal brand but also help be a vehicle for our brand. Part of their contract is a certain number of public facing hours, community involvement, appearance work etc.,” she says.

“It’s very important to us as a club that our players hold themselves at a high level that young and old people can admire and look up to them.”

Mitchell DeLorenzo is a third year Bachelor of Media and Communications (Sport Journalism) student at La Trobe University.  You can follow him on Twitter @MitchellDeLore6

Photo: LeBron James by Erik Dost available HERE and used under a Creative Commons licence. The photo has not been modified.