With the release of the highly anticipated new Pokemon game last week, you could have expected other brands to try and cash in on the success of the anime and game franchise. Instead gamers around the world found the Pokemon brand under attack from an unwelcome but not unfamiliar source. 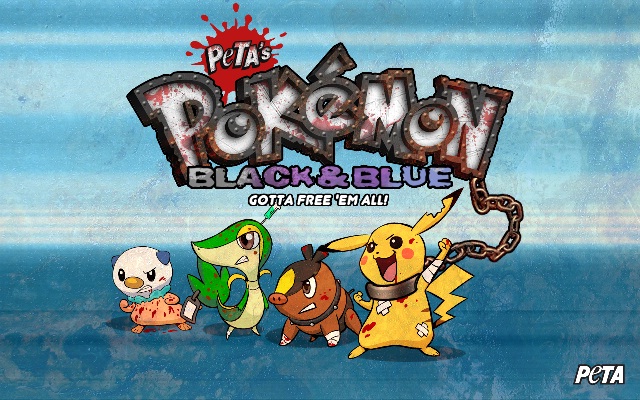 PETA (People for the Ethical Treatment of Animals) launched their own online game called ‘Pokemon Black & Blue’, where instead of trainers pitting their animal friends against one another, the battling monsters attack their human masters, as well as medical researchers and farmers. The argument here is clearly that Nintendo is conditioning children who play the game to have a disregard for animal rights.

Last year PETA reacted similarly to the release of a Mario Bros. game, claiming that that game encouraged players to wear fur.

Other notable efforts from the non-profit organisation include their 2009 banned graphic ‘Veggie Love’ advertisement, and the 2004 ‘Holocaust on Your Plate’ campaign, which equated the treatment of caged pigs and chickens to the concentration camps of the Holocaust.

In light of all of these sensationalist campaigns it would be fair to think that PETA isn’t taken seriously by anyone; after all, they seem a lot more concerned with gaining publicity than actually advocating serious institutional reform.

But the reality is that PETA is funded almost exclusively by member donations, and they have headquarters around the world. Much of their support seems naïve at best, coming from people who agree with the admirable basic principles of humane animal treatment.

Therein lies the tragedy of PETA; when I think of animal rights organisations, or even issues, my mind is drawn to the bizarre and often irrational acts of PETA. Granted, I am not the kind of person who is likely to give to an animal rights group, but it wouldn’t surprise me if the more genuine causes and actions of other groups are being overshadowed in people’s minds by elaborate protests and ad campaigns of the group that lobbied to make the small US town of ‘Fishkill’ replace its apparently offensive name. 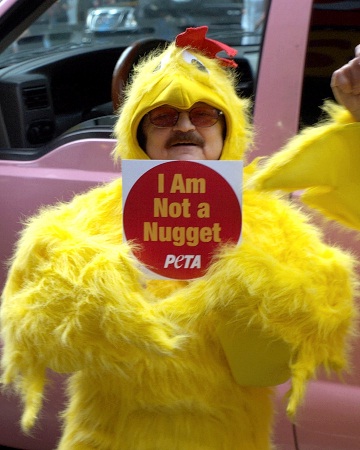 Luckily we have the trusted RSPCA, a much loved and respected animal welfare organisation. They are partially government funded, and have a strong working relationship with the police, even to the point where they themselves have are effectively granted police powers. This has created a legitimate guardian of animal rights in the public eye, but there are no doubt other worthy groups of smaller focus that deserve some attention as well.

Admittedly (and thankfully) PETA’s presence in Australia is limited. But I’m willing to wager that most of us have heard of at least a handful of PETA protests in other countries. They were outspoken on the recent live export issues in Bahrain. It’s a genuinely troubling issue that many Australians would have an opinion on.

PETA’s website decried current government policy, claiming that ‘Each of us has a responsibility to speak up for these gentle creatures, who face a hellish journey, a terrifying wait and an agonising slaughter.’ Compare this to the RSPCA’s response, which stated that ‘it’s time for the government to actually take note of independent advice on the economics of the live cattle trade and start implementing changes that will truly ensure the welfare of Australian animals.’

Working in the economics of live animal exporting is effective in that it brings in an issue besides care for animals. After reading that I immediately wonder if we should change our export policy. Most people are not going to be motivated by animal rights when it goes against economic wellbeing, but raising the possibility that this is a poor economic choice is persuasive. A group like PETA would probably disregard any anything other than moral objection, as it could be offensive to equate economic value to levels of animal welfare.

As Tony Burke, Minister for Sustainability, Environment, Water, Population and Communities writes, he has two theoriesabout PETA. ‘One: somewhere there is an animal-hating evil genius who provides tactical advice to PETA. Or two: they’re just really silly people.’

RSPCA national president, Dr Hugh Wirth, has expressed similar sentiments, saying that ‘you can’t sit down with animal rights people, you just cannot sit down; they’re irrational, they will not discuss anything with you, because they claim to occupy the high moral ground.’ Overall PETA are adept at gaining media attention. This may translate to donations from well-to-do activists, but they are doing more harm than good to the very causes that they champion. They may rationalise their campaigns by saying that donations allow them to fight on real issues, but I’m sceptical as to whether this work comes close to cancelling out the damage they are doing to other groups.

There is clearly room for pragmatic solutions and genuine debate on areas of animal welfare. We should be thankful that we have the RSPCA, but as long as PETA maintains in the media spotlight they will continue to discredit reasonable and genuine organisations around the world.

Tim Viney is a Master of Global Communications student at La Trobe University, and is upstart‘s deputy editor. You can follow him on Twitter:@TimViney2.