Thoroughbred horse racing has seen a decrease in mainstream media exposure in recent years; but can a sport once synonymous with Australian identity regain its relevance? 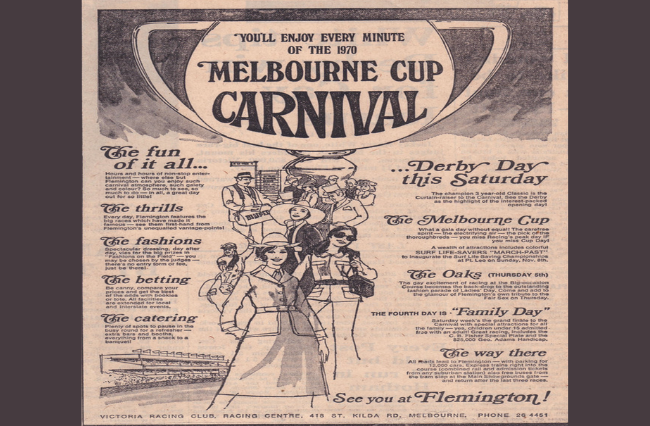 He reflected on the thriving landscape of racing journalism in the late 1980s that saw the sport rival the AFL for back page credentials.

As the industry continued to capture the imagination of sports fans and society alike, racing writers remained relevant. In recent years however, racing has struggled for wider acceptance, leaving the mainstream coverage of the sport near non-existent.

Negative headlines and a reliance on gambling advertisements are key elements concerning the industry’s battle to capture the ardour of younger generations. There has been an increase in animal rights activism at the annual Melbourne Cup Carnival that continues to overshadow the long-serving event that has solidified Victorian racing as a world leader.

Widely reported deaths such as that of 2014 Melbourne Cup favourite Admire Rakti, and animal cruelty charges against former Victorian trainer Darren Weir continue to head the external narrative of racing. This sees the chance of the sport returning to its mainstream appeal of yesteryear highly unlikely.

According to Stewart, other sports have now eclipsed horse racing in popularity, placing the industry on the back foot while the AFL and Rugby League continue to dominate the press.

“Racing was a bigger sport 30 years ago,” Stewart told upstart.

“No one even knew who the chief football writer was as racing was so big.”

“Then the exponential growth of the AFL basically killed off a lot of sports, leaving racing shunted.”

RSN Content Manager Andrew Mayes detailed the ideas addressed in Stewart’s follow up article, ‘For racing, it’s only the bad stories that fit the narrative‘.

“Mainstream publications are now looking more and more through social media for clickbait, and a good story about a country trainer who comes and wins a Group 1 race is not going to get as many clicks as, ‘two racehorses die in a fall at Flemington on Saturday’,” Mayes told upstart.

Racing has been walking on eggshells for a long time according to Stewart, who says that the industry’s reliance upon gambling advertisements to fund prize money has been a decisive factor behind its current poor perception.

Despite being concerned by current marketing strategies he insists that all hope isn’t lost for the sport.

“Racing became gambling-focused and driven at a time gambling became a pariah in society, and to the outside world that’s a terrible message, you wouldn’t see the poker machine industry do it,” he said.

“So, my main beef with horse racing is that it promotes itself on gambling, we need to promote the positive stories rather than push gambling.”

Stewart singled out Racing.com’, Grace Ramage, for her ability to transcend racing through her storytelling, however, stating that one of the challenges for any industry-owned media arm is gaining exposure to mainstream audiences.

“Back in the day there were guys who could write a great yarn and get you interested in the sport not just gambling,” he said.

The evolving media landscape has ensured that the art of race writing won’t be rejuvenated in all its glory, but the sport isn’t yet doomed to revel in past grandeur according to Mayes.

He stated that industry-owned media arms are the way of the future as society gradually moves towards a digital world and traditional newspapers cease to exist.

“We’re going the way of a US-based model, which is based around consumption of content created by industry-owned subscription services,” he said.

“I think it’s the way of the future, as people will pick and choose more and more what they want to consume, so much so that they can cut themselves off from other sports entirely.”

After more than 30 years in the caper, Stewart remains motivated to portray racing in a positive light, confident of shielding the industry against the growing masquerade of critics.

“I still believe in horse racing, but I think it’s in a perilous situation for wider acceptance,” he said.

“I can still justify and stand up against the critics of racing and make a good case for the sport. The tradition, the care, the story of how gambling fits into the bigger picture of the history and the thrill of it.”

The long-term outlook for traditional racing journalism may be bleak, but Mayes is adamant that there will always be a place in culture for an outlier such as Stewart.

“There will always be a place for someone like Matt [Stewart] who can generate news and build the narrative for a lot of the racing stories that are attractive,” he said.

“That role will always exist but just in different ways, through audio, video, and social media.”