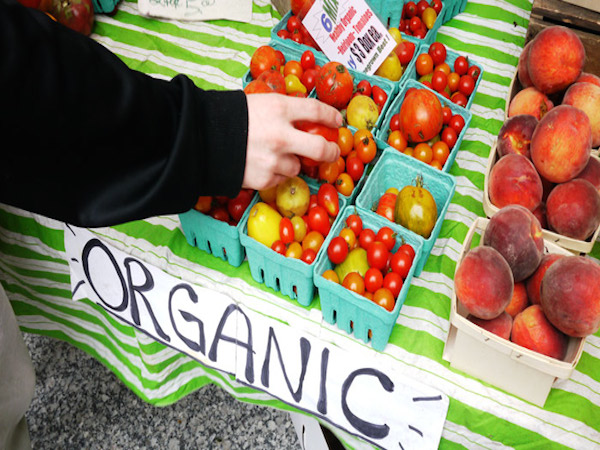 Lately, Australians have had reason to question where their food comes from.

The safety of imported food came into question earlier this year when numerous Hepatitis A cases were linked to imported frozen berries.

Consequently, the federal government has committed to better Country of Origin Labelling in Australia. Under new laws, which may not come into effect until 2017, labels indicating if a product has been imported or Australian-made will become larger and less ambiguous.

As it stands, the Australian Competition and Consumer Commission‘s online country-of-origin guide states that “a product with a ‘Made in Australia’ label won’t necessarily contain any Australian ingredients”. Naturally, this has led to confusion about what food is or isn’t made in Australia.

One way to be certain of the safety of your food, especially fruit, vegetables and meat, is to buy locally. A lot of local produce is farmed using organic practices, meaning there is no use of synthetic chemicals or genetically modified components.

Local, organic food is said to be fresher, tastier and often picked less than 24 hours before purchasing. Making the switch to organic is also considered to have nutritional, sustainable and economical benefits.

Chair of the Organic Federation of Australia, Andre Leu, told Body+Soul that “the number one reason people buy organic is for health reasons and concern about the use of pesticides”.

The organic food market is booming. In 2010, the retail value of the organic market was estimated to be at least $1 billion according to Better Health.

Organic food grocers are popping up around Melbourne. Wild Things Food, Terra Madre, Aunt Maggie’s, CERES and Yum Organics are some of the many stores and markets that service Melburnians looking for fresh and local produce. There is also an app for customers to track down nearby organic retailers.

Joe tells upstart that he prides himself on stocking food that is entirely chemical-free and pure. He says he can guarantee his fruit and vegetables would come back chemical-free if tested.

Organic, however, does not mean Australian-made.

To be recognised as Australian Certified Organic, products must contain 95 per cent or more certified organic ingredients.

While organic foods have received some negative attention for not necessarily adding any nutritional value, experts say there’s assurance in knowing where your food comes from and knowing how it has been grown.

Annie Clark, a lifestyle health consultant, tells upstart she wouldn’t buy fruit and vegetables from some supermarkets because she doesn’t know their source.

“I don’t know if they’re from Indonesia or up the road. There’s no clarity for me,” she says. “I like to buy local, so we buy from the corner store here in Cooroy where I live.”

Clark says a lot of people are price-driven and that the reason imported food is so popular is because it’s normally cheaper than organic produce. She suggests supermarkets are putting more money on organic items.

“They [supermarkets] may actually pay around the same as what they pay for the other fruits and vegetables,” she says.

It’s easier for consumers to identify the origin and food miles of local produce compared to supermarket produce.

CERES has a community garden and sources as much from its organic farm as possible. CERES say their veggies have travelled metres, not miles, unlike some imported organic goods. If produce sold at CERES isn’t from its own farm, it often indicates the farmer who grew it and where.

“Anything in bulk [is popular] as it not only saves money but is more environmentally conscious on packaging,” O’Connor says.

Another popular alternative is to plant and grow your own food.